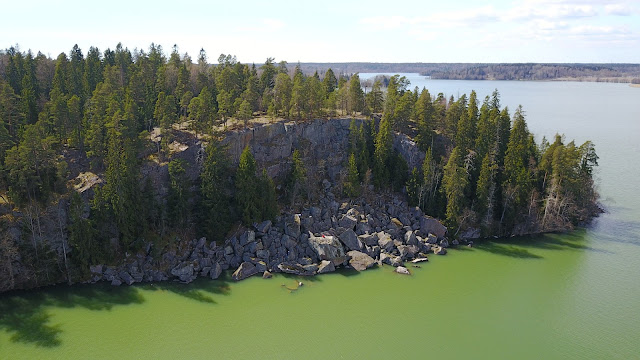 I said that I only knew four caves in Kirkkonummi. I should have checked the Suomen Luolat book, however. Or even my own archives which said I've been to five...

There are actually the following eleven caves in Kirkkonummi, based on the book, Retkipaikka, and my own research:
There are also a few caves that we have some information about, but they cannot be visited or their location is not known:

There are also some small under-the-rock places that are not in my opinion classifiable as caves, but I wanted to note them as well:

In summary, I found more places to visit! A couple of weeks later, I have visited all but the three ones that are on military area or whose location is unknown or that have collapsed. (And I can't believe this is it, there must be more small caves that haven't been listed.)

This means that I now have drawn maps of all (reachable) caves in Kirkkonummi! Woohoo!

By the way, here's what Google had to say about Skevabackgrotta:

Posted by jariarkko at 2:31 AM