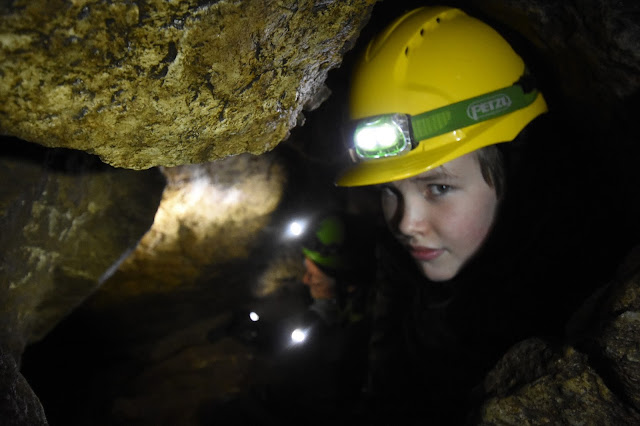 Caves in Finland may be small, but fortunately also claustrophobia-inducing. Caves are also not well known, but this one has an actual road sign and a parking lot!

On the last Sunday of January, we collected our regular team of experienced cave researchers, ranging from 11 year olds to adults, and headed to Lohja. The Torhola cave is easily reached, and the longest karst cave in Finland. It has been measured to be 32 meters in length, and the difference between its highest and lowest parts is 12 meters.

The winter makes caves and entrances to them icy, but it also makes rock even prettier than usual. Ice stalactites grow from the roof and floor. And beautiful frost covers surfaces!

The main entrance to the cave is big enough to walk in. Or as it may be, slide in on your bottom. The main chamber begins right from the entrance. A large, open space chamber by Finnish standards, blocky rock forms covered by that frost.

There are cracks and even some side entrances to choose from, and exploring the cave, despite its size, can take a long time. We didn't explore everything, and even we stayed for three hours in the cave.

The main attraction of the cave is at the furthermost point of the main chamber. If we had not read about it, we would not have found it. A narrow hole lets you drop into a lower level a meter and half below. You'll not see what you are dropping into, so it is a bit of a leap of faith. And the hole is very small, it is easy to get stuck or claustrophobic.

When you get to the lower level, there is a small chamber where two paths split to the left and right. I thought I had read the right one continues further, so I tried to take that path. With a small stream of water at the bottom, and ice forms constricting the already narrow path, I started to get very claustrophobic. I took myself half way through the tightest point, but then decided to crawl back - backwards. My friends from the Finnish Caving Society didn't feel so scared, however, apparently you can go through even in these conditions and turn around in the very small chamber right after the tight squeeze. In a pool of water. I don't know, way too extreme for me. What if you get stuck?

Fortunately, we decided to look down the left path as well, and realised that I had remembered the instructions wrong. The left path continues a few meters further down through relatively narrow passages, but ends in a bigger space called the Torhola Basement. From there on, the tunnel continues just a meter or two until it is blocked by a rock. The rumour is that if you reach your hand around the rock, and someone reaches their hand from another entrance to the cave, your hands can touch. We tried the other entrance later, and it was way too small for me to enter. My head does not fit through the hole, let alone my fat ass! Although the hole might be easier to go through in the summer, if the leaves at the bottom of the hole could be pushed aside. We'll have to return.

Aside from the other entrance, there are also a couple of other smaller caves around the area, away from the lake towards the forest. 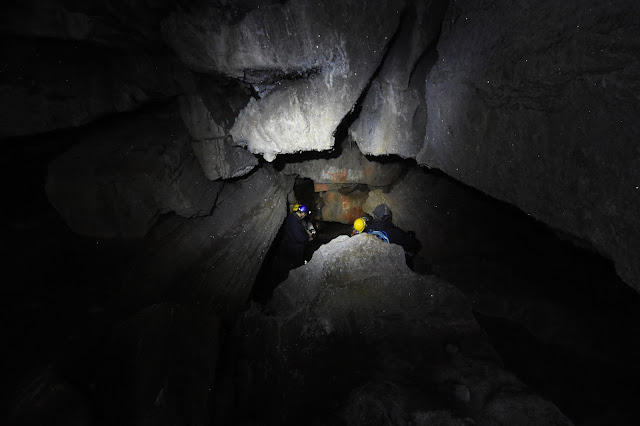 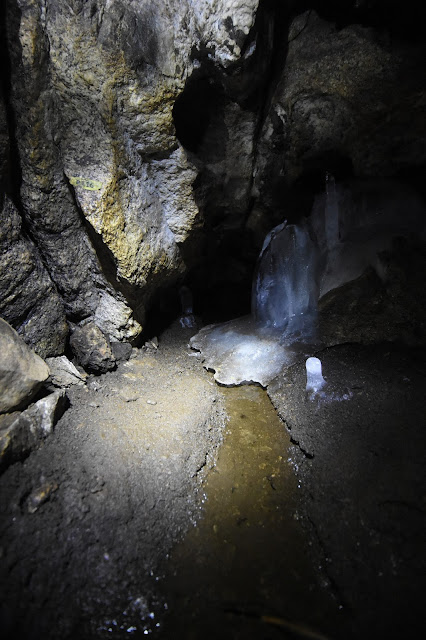 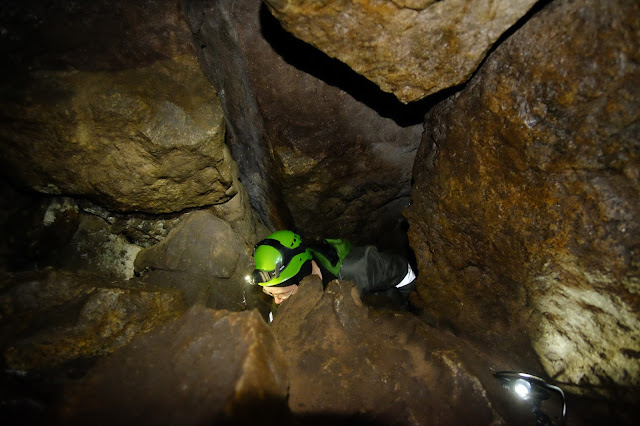 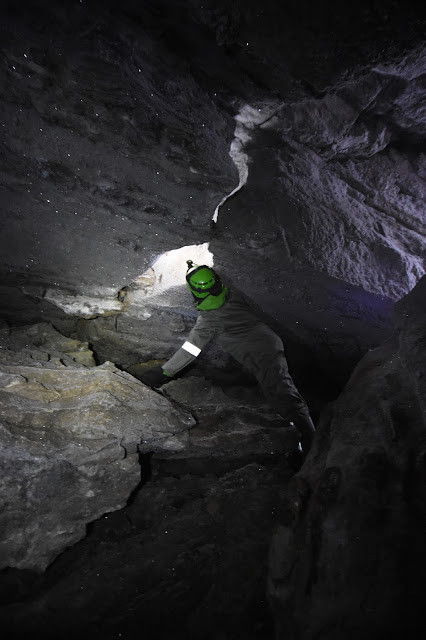 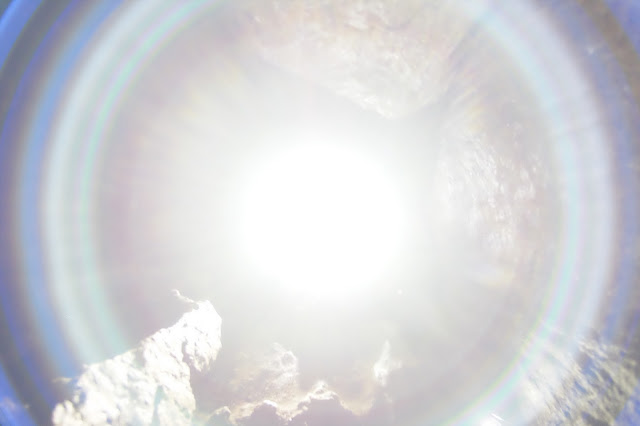 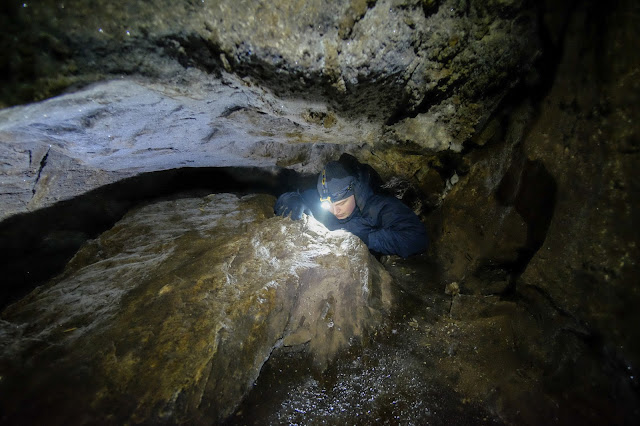 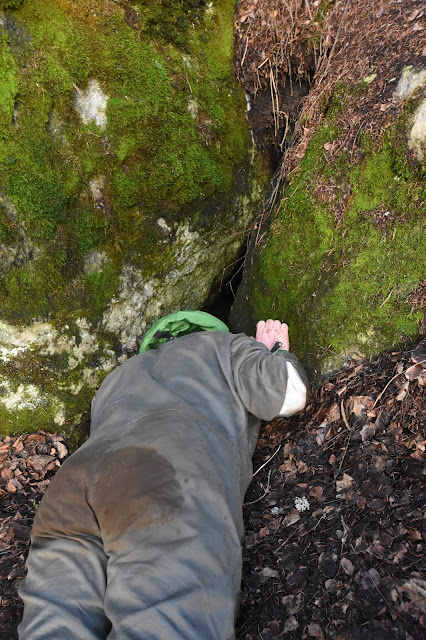 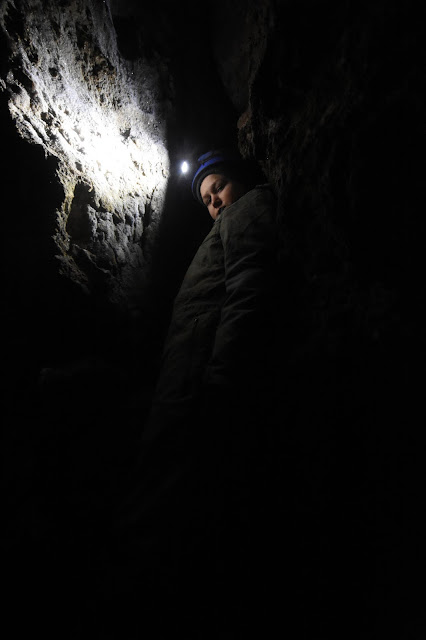 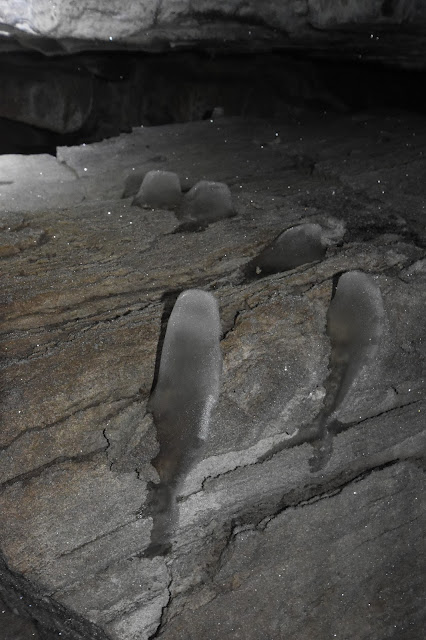 Photos and videos (c) 2016 by Jari Arkko, Jarmo Ruuth, Olli Arkko, and Janne Arkko. This blog is also available at the TGR website. Tämä blogi löytyy myös suomeksi.
Posted by jariarkko at 6:49 AM No comments: 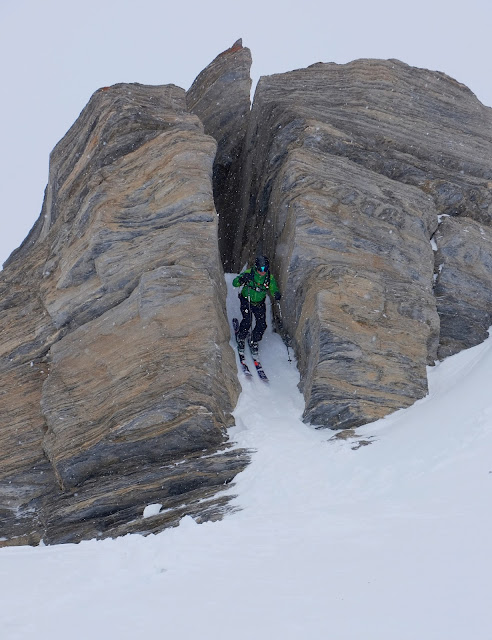 I like caves and skiing, of course, but it is rare that the two mix. But in Cervinia there's small cave that you can ski through. If you dare.

The cave is small, something that would be classified as cave only in cave-poor Finland. It is formed from a large rock that has cracked and created a opening 70-90 cm wide, with another big rock forming a roof. What makes this cave interesting is that you can ski through it. Depending on snow conditions it can be quite easy to enter, but the exit is more demanding. The exit is much lower than the entrance, and while the crack is straight and wide enough to be skied in, you'll begin your exit by dropping an almost vertical slope for about two meters. From there on the, the slope curves nicely, but as long as you are within the crack, there is a chance of colliding with the side walls. The left wall, in particular, curves slightly toward you before the final exit. And after exit there are rocks in the ground that need to be well covered by snow before you dare ski over them.

It isn't much of an issue, but I didn't want to hit any of the rocks at high speed, so I spent a long time pondering whether I'd dare ski down. In the end I gave up, and we continued skiing elsewhere with Jarmo. But later I returned, determine to ski through, and did.

We also visited the touristy ice cave at the top of the ski station on Klein Matternhorn. You take a lift couple of floors down, walk through an ice tunnel to enter a bigger area with various halls, sculptures, and even an ice slide. Unfortunately, as we were about to take a slide, the personnel came to close the cave for the day. Interestingly, the cave is constantly being formed and re-formed, and there's even a small excavator within an area of the cave that is being built. I'm not sure how they got the excavator in to the cave, how they will get it back out, and how they get fresh air in the cave while it works.

We also skied in many places outside the official slopes in Cervinia. More on that in later blog posts, but be aware of hitting bathtubs while out there! We run into one on our excursions. I wanted to turn it around and sit in it, but I was scared that it might start sliding down, so we left it alone.

I've been to Cervinia before, but had not stayed in the village. The village is surprisingly small, but big enough to have one food market and many small restaurants. The restaurant that we most liked was "Ymeletrob", a place that mixes a bar to a grill and to a fine-dining establishment. I recommend the salmon hamburger, in particular. Followed by chocolate fondue. Naturally. 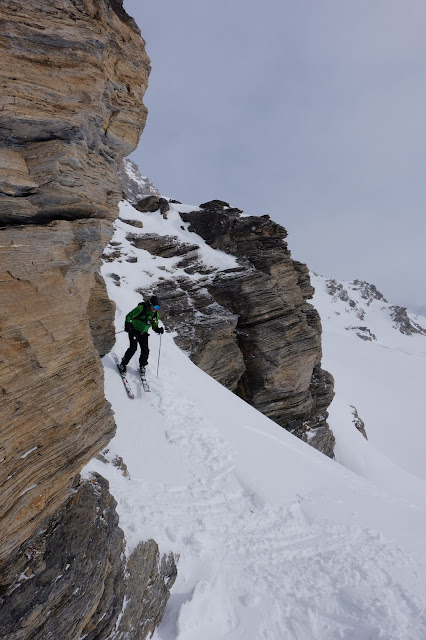 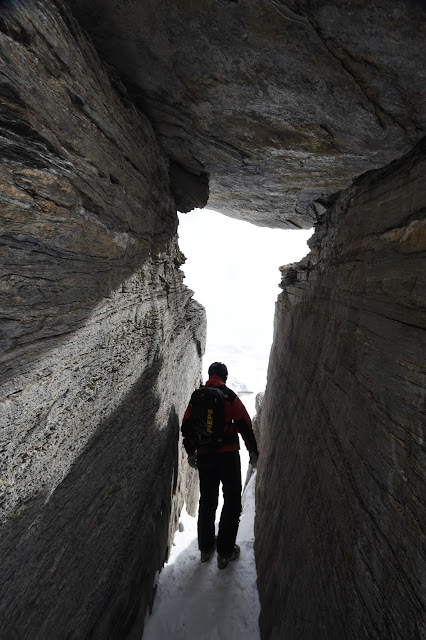 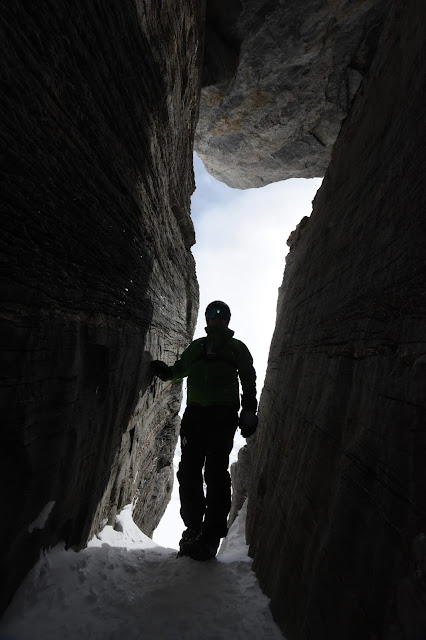 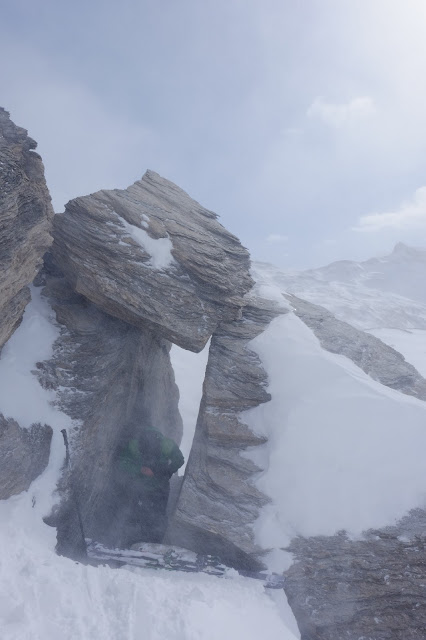 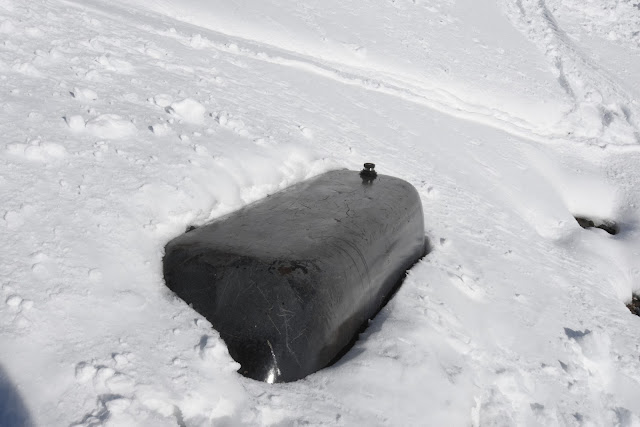 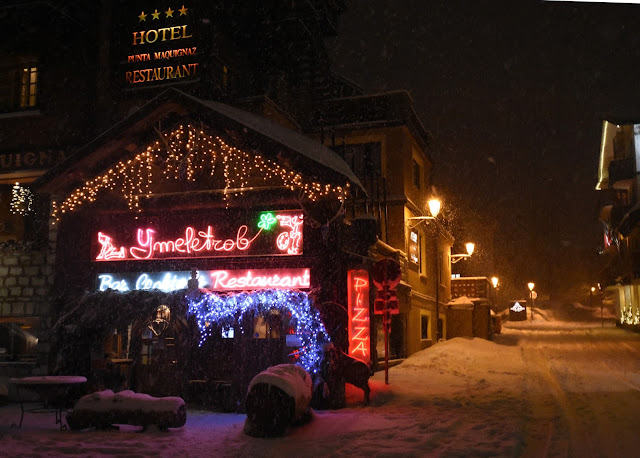 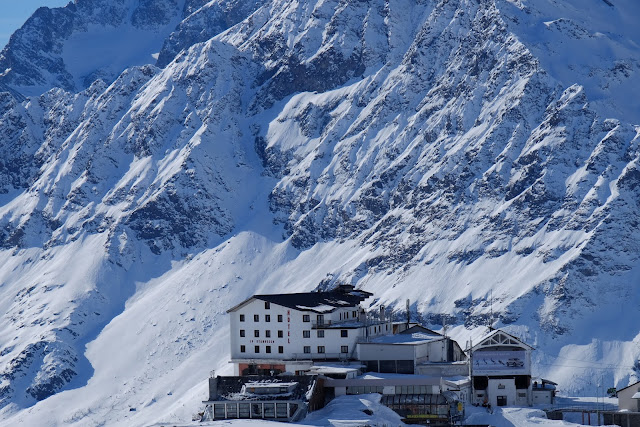 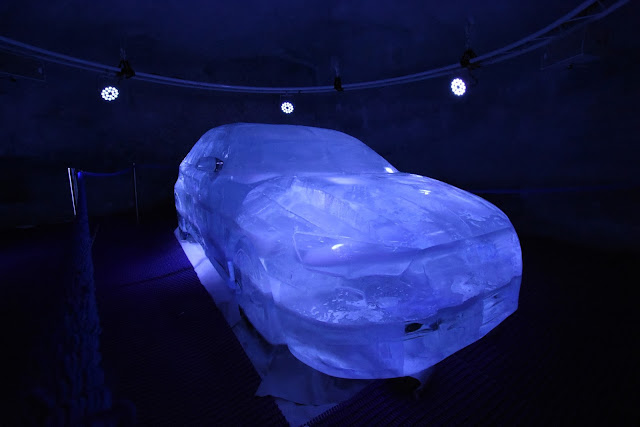 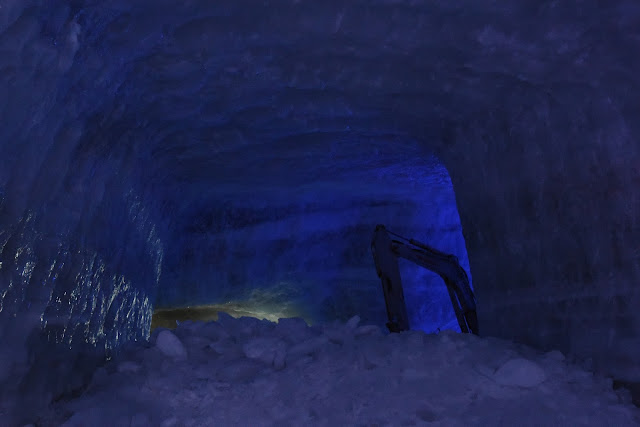 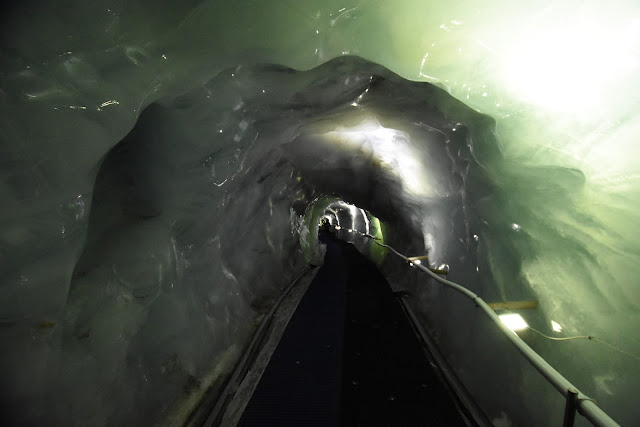 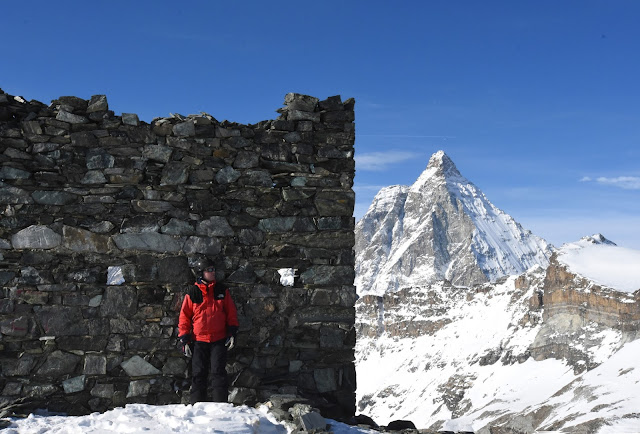 Photos and videos (c) 2016 by Jari Arkko and Jarmo Ruuth. This blog is also available at the TGR site. Tämä blogi löytyy myös suomeksi.
Posted by jariarkko at 4:26 AM No comments: