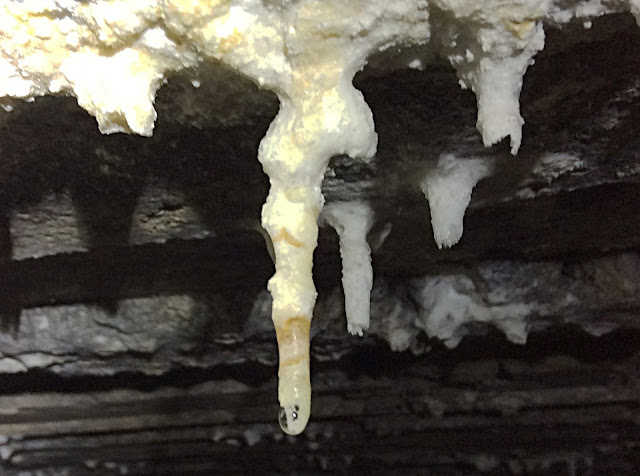 This lazy Saturday's program for me and Janne was to visit some of the bunkers and moats around Helsinki's WWI defence structures. There are plenty of these structures, sadly all slowly rotting away. Historic sites, officially almost forgotten and certainly not cared for.

We decided to visit the structures in Pirkkola, right next to the parking lot of the Pirkkola sports complex. For a map, click on this blog article or for a background on the structures from the Department of Museums, click here.

Sadly, while there are big underground tunnels, they are mostly closed off. One possibly bigger bunker had a closed door that had at least so far resisted attempts to enter, despite a large metal pipe being used as lever to twist the door. This bunker had been open to the public earlier, but now it is indeed closed.

We did find one open but narrow entrance to a two-room shelter, full of trash and stalactites growing from the roof. Someone had written "Monttu Krouvi" (Pit Pub) on the wall. 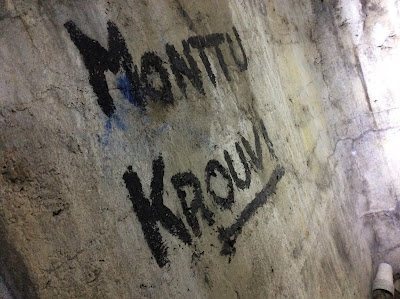 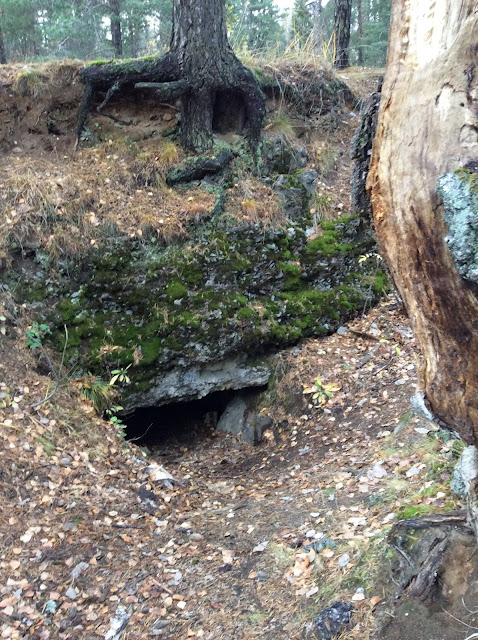 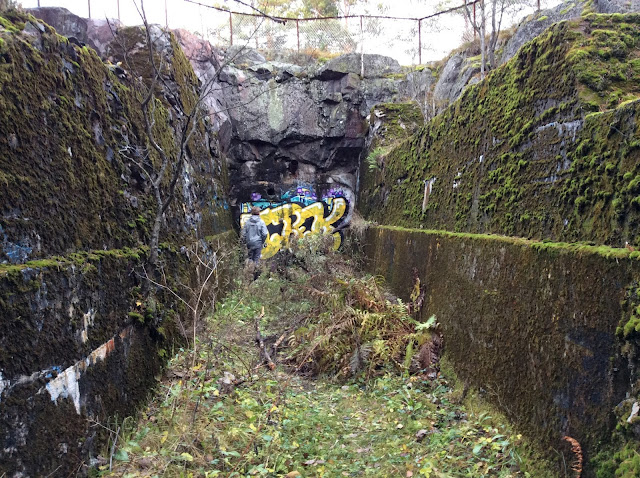 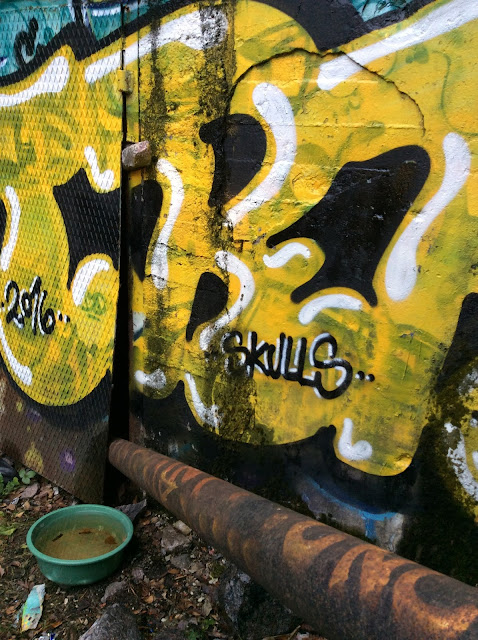 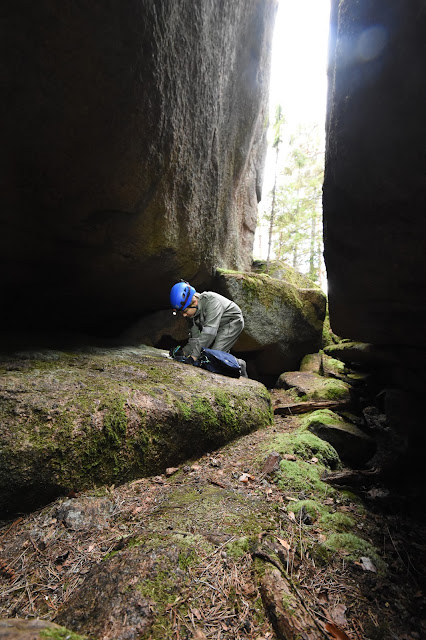 Nauvo is a large island in the archipelago south of Turku, Finland. Varberget is a set of small caves on a cliff ridge that rises on the island.

Janne and I took a day to drive to Nauvo, ride the ferries with our car, and hike to the ridge. We found a small cliff that was cut by horizontal and vertical cracks. There were at least four major areas of cracks. A horizontal crack system was running through a long distance through the ridge, though unfortunately disappearing here and there, so you the caves are really separate small ones rather than one large cave.

But Varberget is a nice hiking destination, the caves are easily explored by anyone, as long as you have clothes that you are willing to crawl in a bit. At the top of the ridge there is an observation tower. 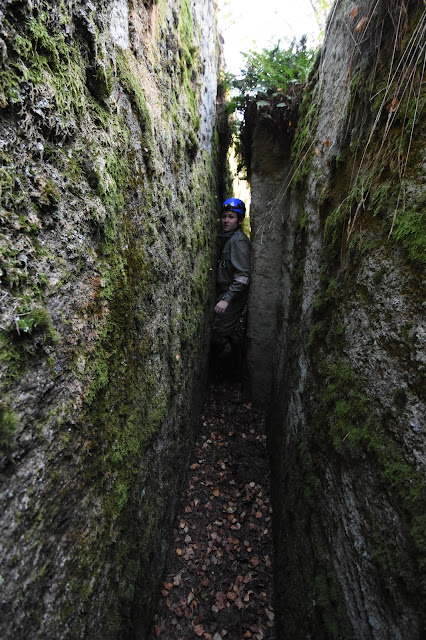 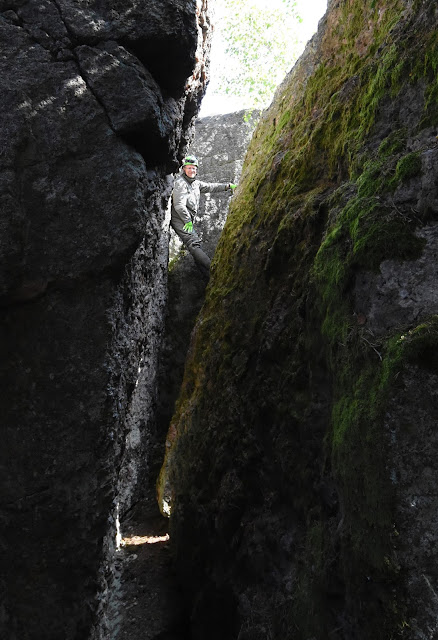 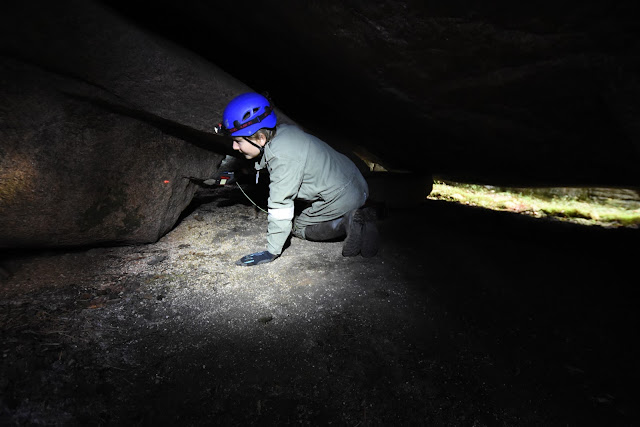 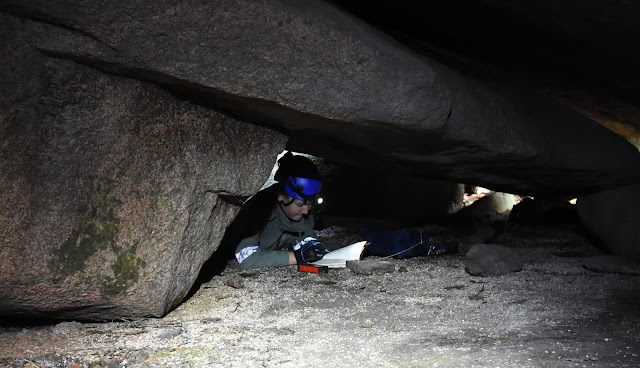 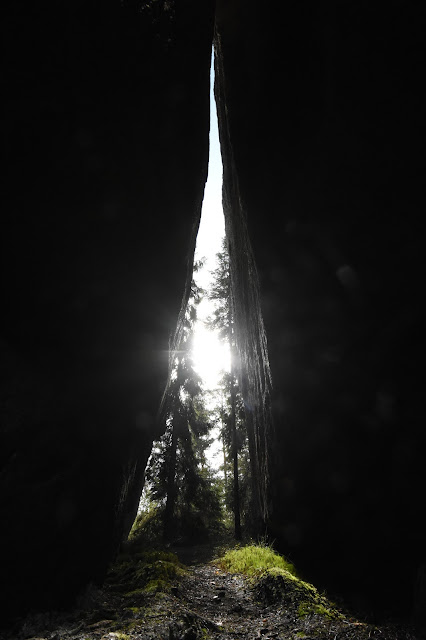 Photos and videos (c) 2016 by Jari Arkko and Janne Arkko. This blog is also available on the TGR website.
Posted by jariarkko at 11:03 AM No comments: 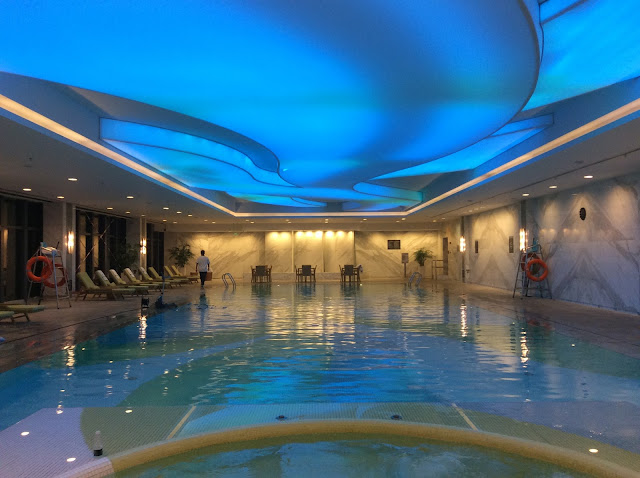 Another visit to a sauna in foreign land! This time in 杭州市 or Hangzhou, China! The sauna was in the Courtyard Marriott hotel that I stayed at. A bit dark and basic, but still large, and most importantly, the temperature was high enough and you were allowed to pour water to the heater!

The swimming pool was more interesting looks-wise, though. 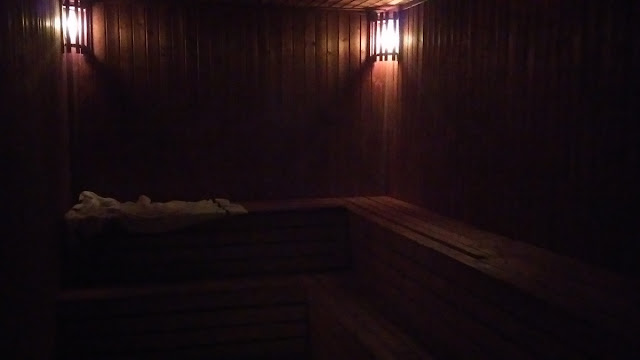 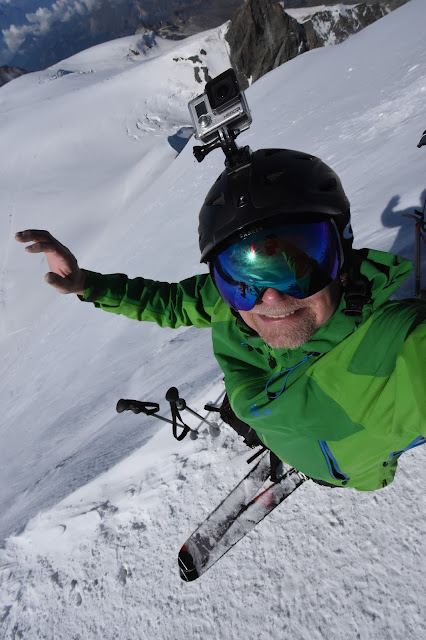 Third time's a charm! I finally managed to ski down from Breithorn. Two failed attempts... and what a  wonderful third one, with a high speed ski run down. So much fun to pass the climbers on a long trek, me going at 80 km/h while screaming from the top of my lungs as I passed them :-)

My first attempt was some years ago, interrupted by broken crampons and a hasty guide. My second attempt was getting to the top on a guiding group, but without skis. The purpose was to get to visit to the top, see how I'd do with the altitude, learn the route, and scout the skiing opportunities.

But again, for some reason the guide was in a hurry. Was there a reason we could only stop once on the way up? I would have wanted to take some photos & rest some more. And on the way down, we were almost running. Not sure I understood the point, it was still early I think so there was no safety issue. Maybe the guide was eager to get back home.

Anyway, the third time was perfect!

It wasn't possible to hire a guide for skiing this peak, so I was alone. But, I now had experience of the route and some understanding of the potential crevassed areas, and had skis, so felt confident that I could do this safely. I hadn't packed my own skins to the trip, but fortunately, I found a shop, Yosemite, that rented skins in Zermatt.

My plan was to skin up until the going got too tough, and then put on the crampons and walk the rest. It turned out that this was unnecessary; the path was steep at places, but quite workable even for skinning up.

I got to the top, and knew the recommended route down. Nevertheless, I had not seen anyone ski from Breithorn on the many days that I've been either on it or nearby, so I was a bit anxious about the route. I decided to ski down a bit more boring route on the upper part, near the short-cut steep walk-up path. Since I was near the walk path, I knew the crevasses situation was better, and this was also slightly less steep than the direct route down. On the upper part the hard snow cover was coming apart a bit as I skied it, so this was also a better route in terms of not sending snow down when there are climbers still coming up.

Once I reached the main walk path, I was able to cross to the other side of the rock outcrops, pass the crevasses, and then I was able to ski again, and was able to get some speed.

It was a great run, good snow, sunshine and an airy feeling. Happy I did this! 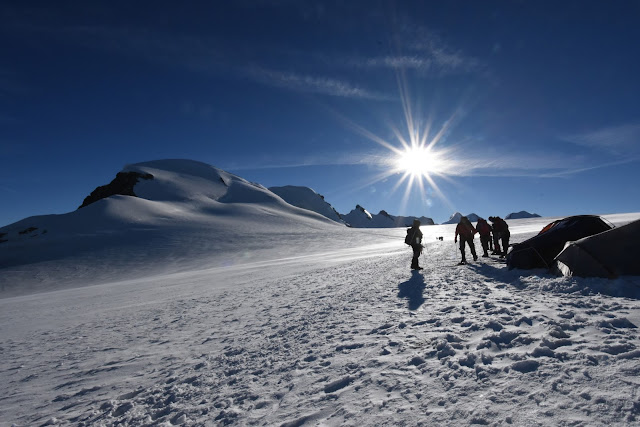 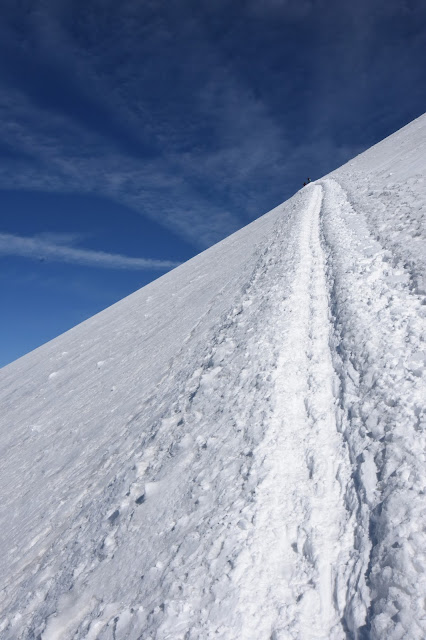 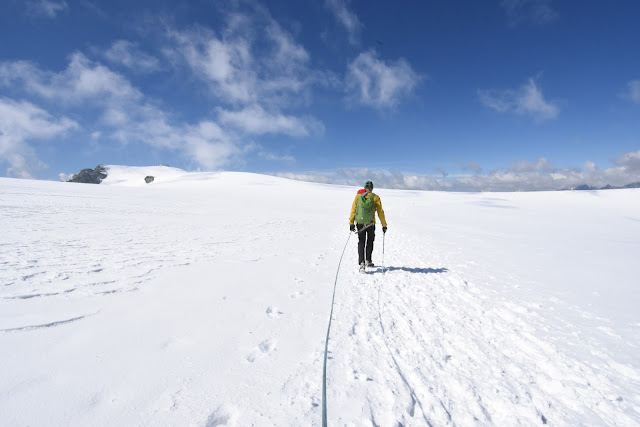 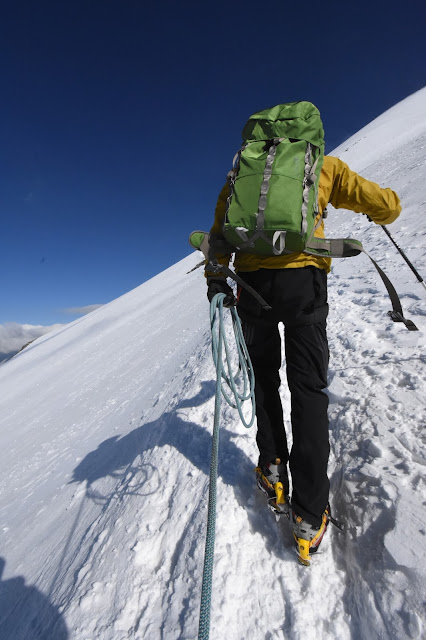 Our guiding group had two very friendly Japanse climbers. Here's one of them after the climb: 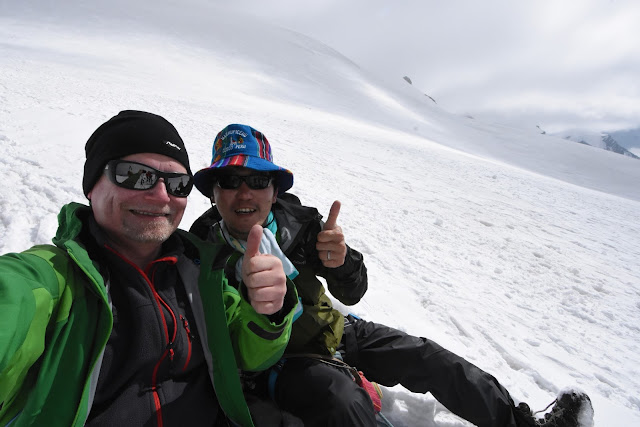 I also visited the ice cave at the top of the Klein Matterhorn: 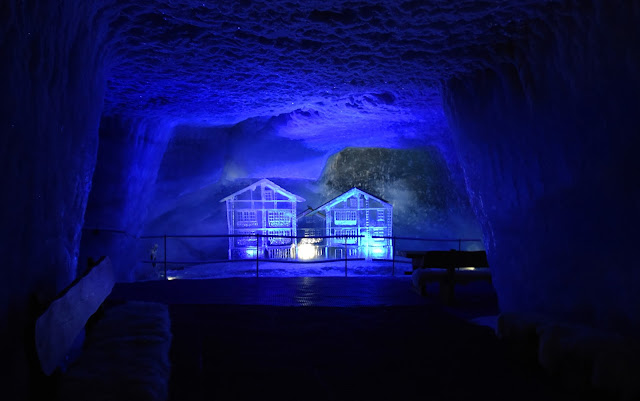 At the end of the day, I was so tired that I found the long gondola ride down from the mountain very useful: 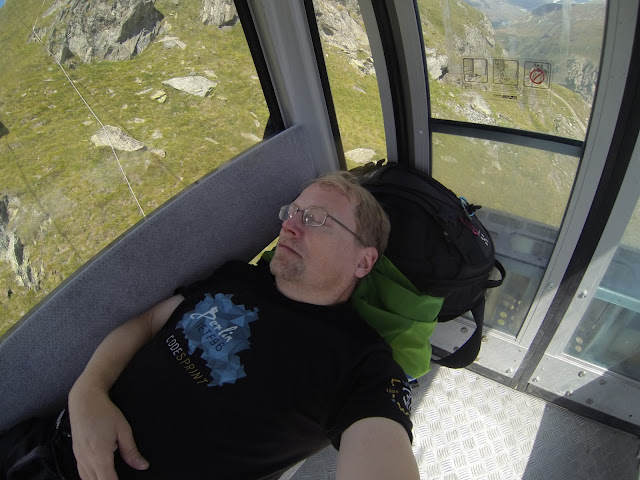 Photos and videos (c) 2016 by Jari Arkko. This blog is also available at the TGR site. Tämä blogi löytyy myös suomeksi Relaasta.
Posted by jariarkko at 8:46 AM No comments: 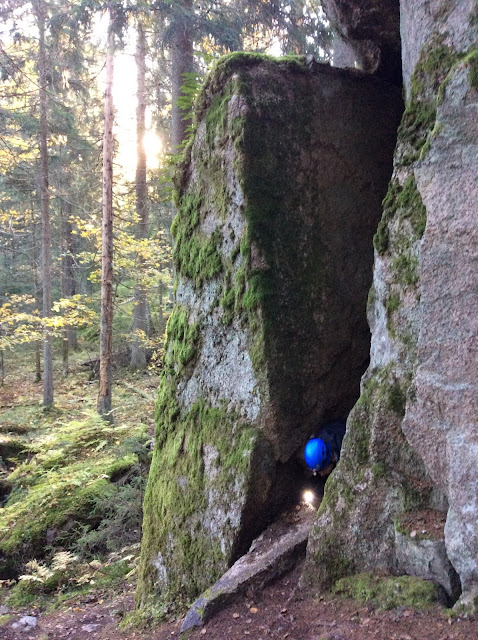 Today I had an unnatural 0700 wakeup so that I could enjoy Nuuksio morning and caves with Janne before taking off to a trip later. 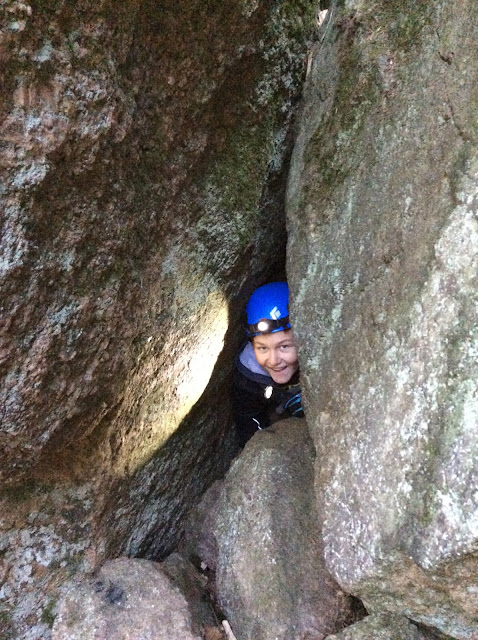 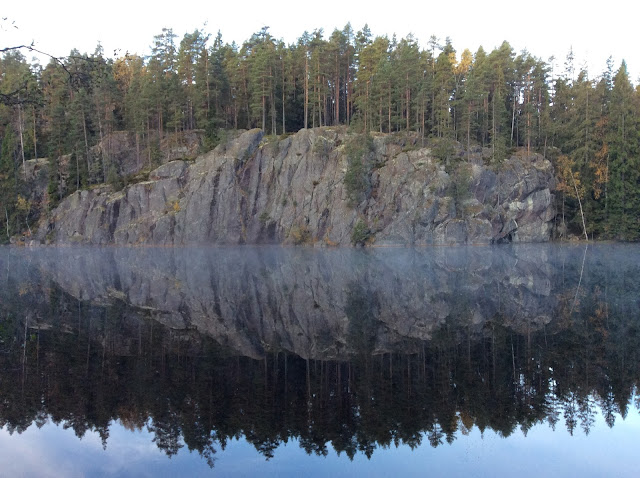 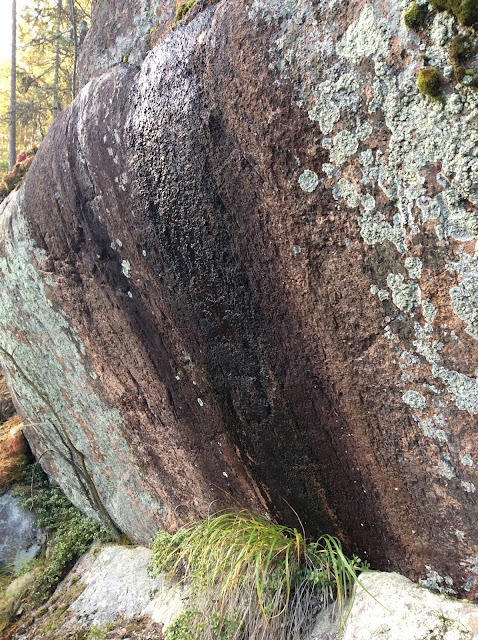 After the excursion in Nuuksio, I was heading to Washington DC for couple days of meetings. In celebratory mood, given that our Internet administrative change had been finally executed! This was a project that took three years and had been in the making for a more than a decade. 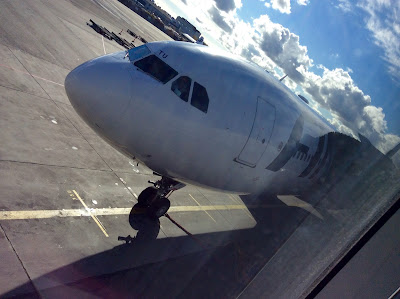 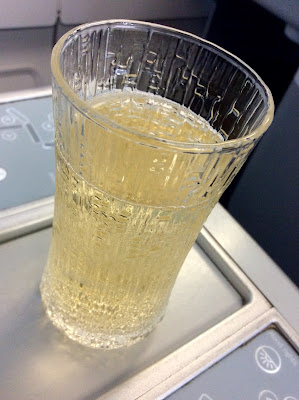