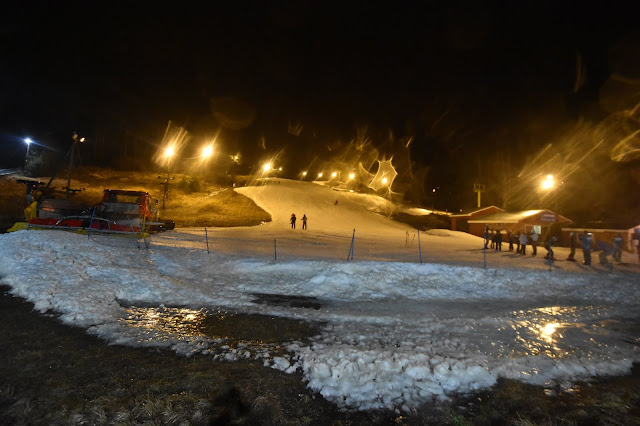 It's 160 feet to the top, we’ve got rain, no snow in this half of the country, it’s dark out, and we’re wearing sunglasses. Hit it. 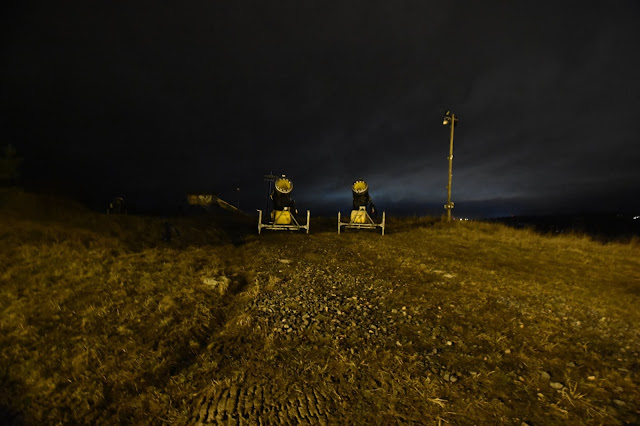 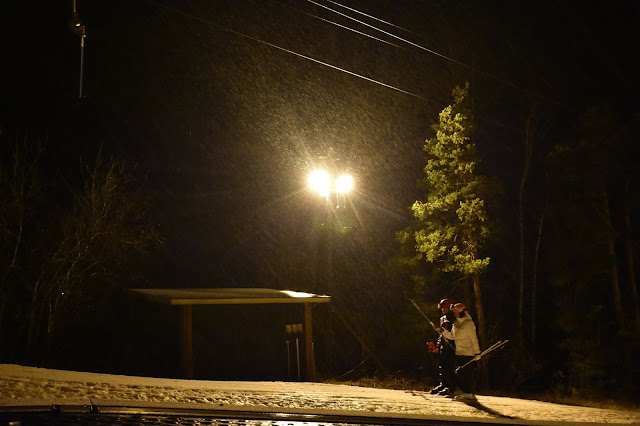 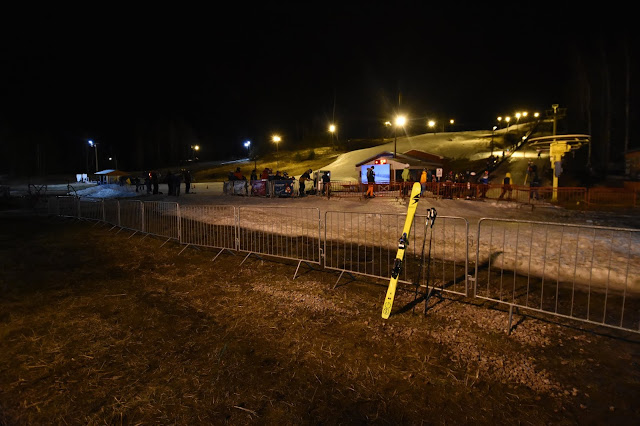 All this happened at Peuramaa. Earlier articles can be found here playground, season, darkness, opening day, golfers, and drone. Photos (c) 2020 by Jari Arkko. All rights reserved. My skiing stories can be found from Blogspot and Teton Gravity Research, as well as of course Planetskier.Net!
Posted by jariarkko at 11:10 PM No comments: 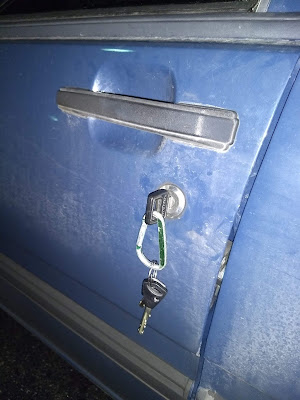 Remember how I broke my Volvo keys last week? This week, obviously, I lost the remaining key...

Well, I thought I lost them. I later found them on the door of the car in the parking log, had been there the whole day.

Phew, but what a stupid thing to do. Can't afford to lose more keys!

Posted by jariarkko at 2:23 PM No comments: 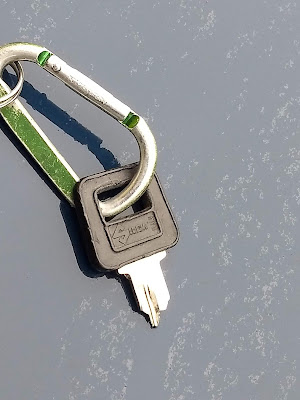 
Morning: New year, new Volvo troubles. First the battery is out, not sure why. I go for the charger in trunk, but can't get there because there's no power for central locking. Try the key, key snaps. Now buying new charger at Motonet, where I got a ride from the repair guys who were picking up the snowblower that blew up yesterday. Neither them or any neighbours have starter cables.

Evening: On the positive side, it is nice to walk to the train in beautiful southern Finland winter weather: 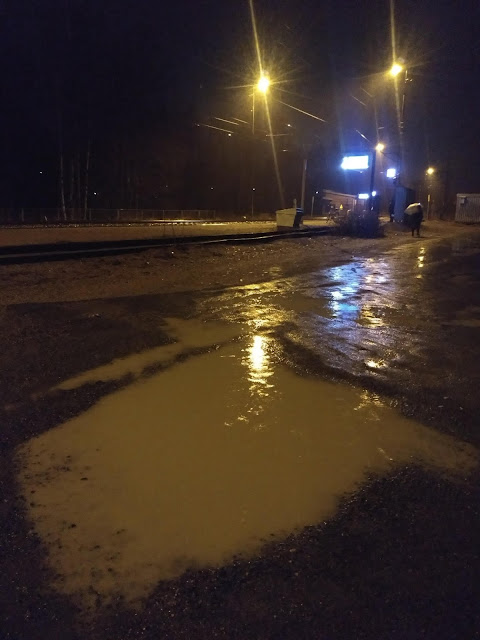 Later: Charging now let's see if it will help: 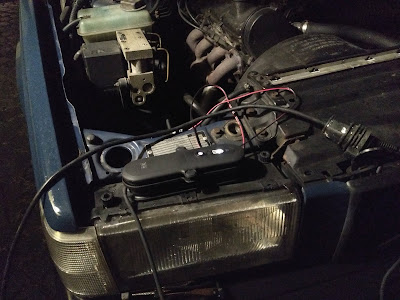 Also, I think I identified the problem - indoor light switch in wrong position, used the battery in two days. 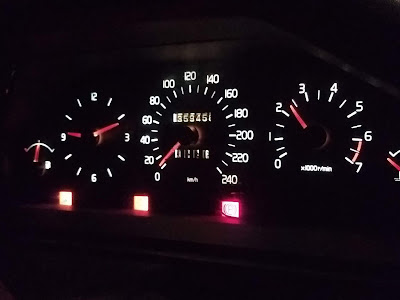 Next day: Today's F-word is "Flu" :-( Didn't help to walk in the rain yesterday.

Photos and text (c) 2020 by Jari Arkko. All rights reserved.

Posted by jariarkko at 2:18 PM No comments:

My massive crash in the Ylläs 24H 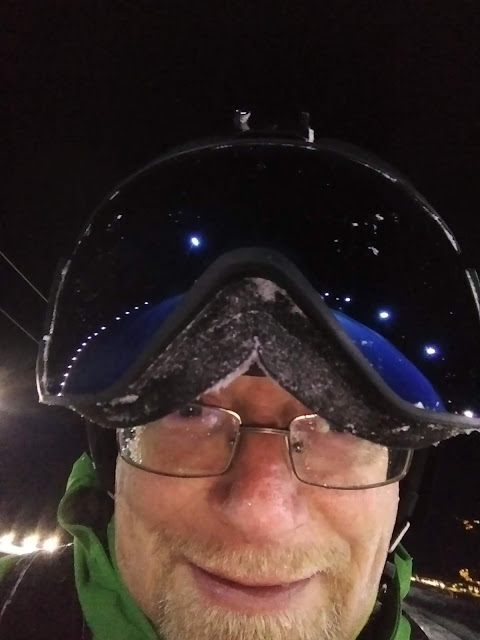 During the Ylläs 24h race in 2019, around 2am I was heading down the Worldcup run at,  I guess,  at a bit over hundred kilometres an hour. And then something happened. I lost my skis, I tumbled, and hit myself to the icy slope pretty hard.

When I came about I was on lower on the slope, in full yard sale form. I collected a pole or two and sat down on the side of the slope. I thought I had broken something. But amazingly, I was just having some bad feelings from my back to head and the limbs, but nothing seemed to be broken. Also, my giant slalom racing skis were tuned for DIN 10, and I had not really known if they would open in a crash, as I usually keep my bindings at DIN 7 or 8. But they did, that's good news. Otherwise I might had broken a number of bones... 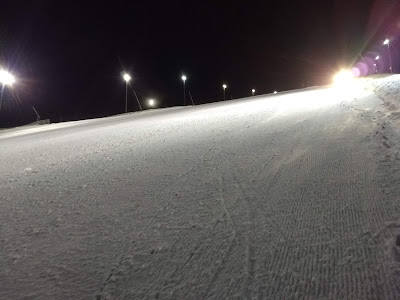 In a couple of minutes the race organisers showed up in their snowmobile and asked if I was ok. I said I was, and they gave me my skis from higher up. I skied very carefully down, and decided that I need to take a break and see if I'm really OK. I ended up visiting the sauna in the race facility, and watching the racers fly by in the darkness. 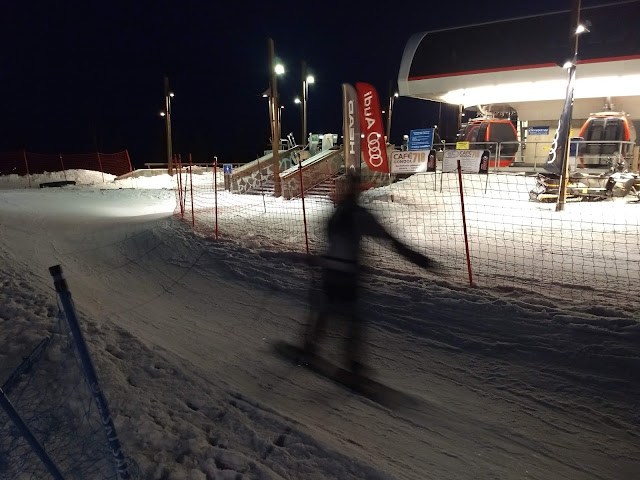 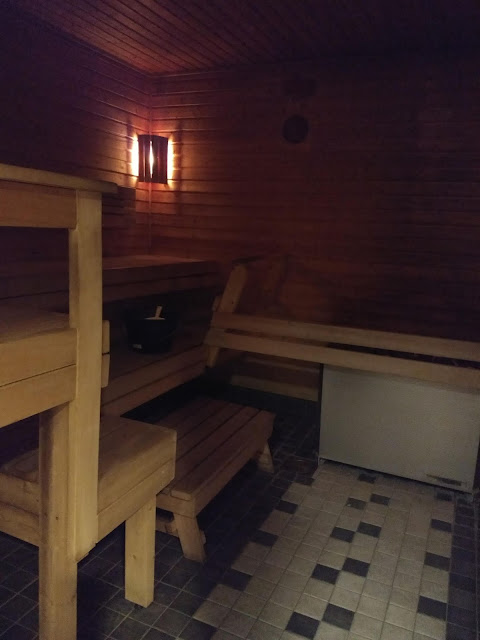 I also considered whether I should rejoin the race after that, but decided that it is better if I try to sleep a few hours.

But sleeping was difficult. There are several hotels in the area, but since I had thought I wouldn't need any, I started calling the hotels and found out that none of their receptions were 24/7. In the end, I slept maybe 6 hours in my car under a sleeping bag, occasionally waking up and heating it up the car a bit. It was a cold night.

In the morning I felt better and re-joined the race. This was my first crash in this race, though, having been there now four or five times.

Photos (c) 2019 by Jari Arkko. All rights reserved. My skiing stories can be found from Blogspot and Teton Gravity Research, as well as of course Planetskier.Net!
Posted by jariarkko at 7:13 AM No comments:

Kicking myself for not skiing Kosovo 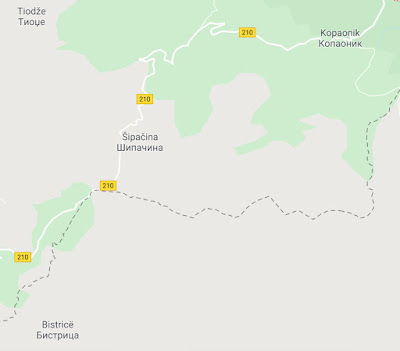 I was skiing in Kopaonik, Serbia, to collect yet another country that I've skied in :-) but on the way back I made a HUGE mistake.

The road back to airport touches the border of Kosovo for a few hundred meters. I had asked about this from the hotel, and they felt it was illegal and risky to cross the border. So I didn't.

Granted, there is the question of the recent war, hostilities, distrust, possible border patrol or military troops. And for my statistics, it is not clear how Kosovo would be counted, given the notion of a "partially recognised" state. But, I don't think there was anybody looking at that piece of snowy mountainside. I could have taken a few turns. Why didn't I?

This article has also been published at TGR. And all skiing articles are of course at Planetskier.net! You can also read all the Planetskier and Planetcaver articles at Blogspot and TGR. Photos, videos, and text (c) 2019 by Jari Arkko. All rights reserved.
Posted by jariarkko at 7:13 AM No comments: 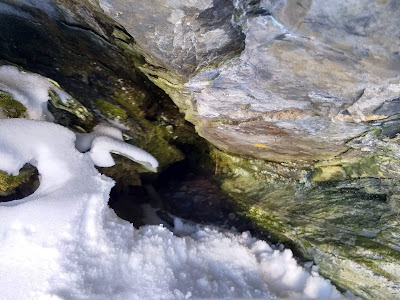 While skiing off the Gamsleiten 2 ski lift in Obertauern, we spotted a potential small cave. It was outside the pistes on a steep slope, but I skied to investigate. And found what would in Finland be classified as a cave: 2-3 meter long roof cave on a cliff. But not in Austria... 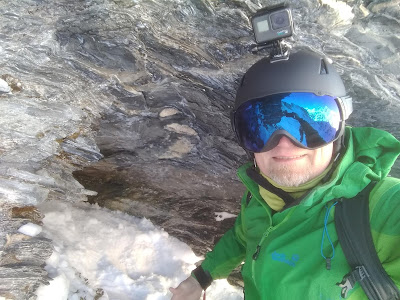 See more caving stories at planetcaver.net, and see other articles by the planetskier at Blogspot and TGR! Photos and text (c) 2020 by Jari Arkko. All rights reserved.

Posted by jariarkko at 6:15 AM No comments: 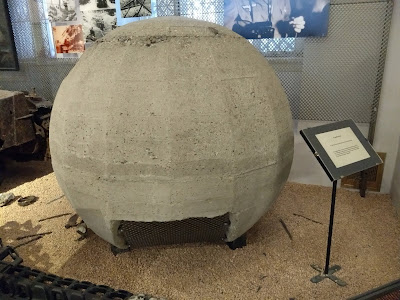 At  the Vienna museum of military history (Heeresgeschichtliches Museum ), we saw a funny "kugelbunker", a concrete boulder for one person shelter from the world war times.

There was also a hole. Probably not the best, if any protection... 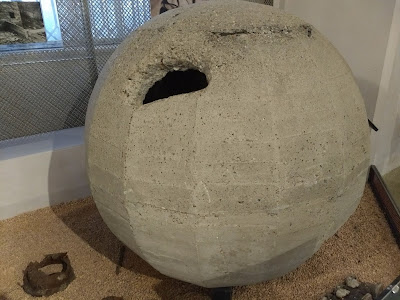 See more urban exploration and caving stories at theurbanexplorer.net and planetcaver.net, and see other articles by the Planetskier at Blogspot and TGR! Photos and text (c) 2019 by Jari Arkko. All rights reserved.

Posted by jariarkko at 5:44 AM No comments: