Yesterday I went to the world's longest indoor ski slope, Snowhall in Amneville, northeastern France. I was also testing some new equipment, a GoPro Hero 2 helmet camera. For the first time in my blog, I have focused more on the video than on the text and pictures, so be sure to check out the video as well:

My trip started early in the morning from the western side of Paris, and I needed to get to the eastern train station to catch a high-speed train towards Amneville.


For a long time I've been meaning to get to ski slopes with the help of a bike, and it made perfect sense for my trip. Getting to the train station would be easy by bike, but complicated in the crowded subway trains that do not even have a direct connections to where I was going. And there's a wonderful public bike rental system in Paris, it feels like there are rental stations almost at every street corner. The stations are automated, and one day rental costs 1.70€ (!). Register at Velib.

Paris is difficult, even if wonderful, city to bike in though. What made my trip easy was that I started before the rush hour. When the cars and people are on the streets, you have be far more careful in selecting bike routes. There are good bike routes and then there are ... bike lanes where you'll fit in with the buses and trucks. Avoid the latter.


To get to Amneville, I first considered renting a car. However, since Amneville is 350 kilometers from Paris, it would have taken at least four hours for one-way drive. Fortunately France has an excellent system of high-speed trains, the TGV. I only needed to get to the train station and then a short taxi ride at the other end, and then the main part of the trip would take just an hour and half. And at what speed! The train felt fast but I realized how fast it really was when I turned on my GPS and it showed 316 km/h!

Snowhall is the world's longest indoor ski slope at 620 meters. It may also be the highest at 90 meters. I have not been to a higher one, at least.

(The indoor ski hall in Bottrop, Germany may challenge these numbers at claimed length of 640 meters but their slope is zigzagging.)

Snowhall has three slopes, the main one, a small beginner's slope, and a tiny sledging area. All slopes are straight, and none of them is particularly steep. As you can see from the video, it is easy to ski the main slope without making any turns. But its length makes it still fun to ski.


As usual with many of the indoor slopes, Snowhall is heavily used in training both alpine athletes and children. When I was in Snowhall, a group of children were learning to ski a race track; the track was fun for myself as well, by adding challenge to otherwise a relatively easy slope.

Snowhall is located in an area with casinos, hotels, bowling places, bars and restaurants. People come here for fun.

I skied for two and half hours, and hiked afterwards to the top of the hill where Snowhall is on. Coming down took a while... waiting for the taxi took a while... and then we got stuck in the traffic. The end result was that I was one minute late for my TGV train back to Paris. Unfortunately, the next one would leave two hours later.

Fortunately, I did not have to buy new tickets. The very helpful ladies in the SCNF office not only gave me new tickets but also money back for some weird reason. Apparently the other train was not as high class as the original one, so the ticket price was lower. Or maybe the evening tickets are cheaper than afternoon tickets. Hard to tell. I'm glad though.

At the end of my trip, I rode the subway back to my hotel. But I have to tell you, carrying skis in packed metro cars is not fun. Nor is wearing your heavy jacket.

Two hours at the Snowhall cost 20.50€ on weekends. Your best bet for getting into the hall is with your own car, but taking a train ride to Metz and then grabbing a taxi is also possible.

Snowhall is a good indoor ski hall, among the best such as the one in Bottrop or in Landgraaf. It has enough space, sufficient height and length, and jumps, rails and other things to keep you occupied. However, none of these places are as good as the one in Dubai, which is the only one that in my mind is steep enough to entertain you for longer period of time.


I hate my job. Now I have to go to Paris for two weeks. In spring! What a dreadful city!

Seriously though, I love Paris. And I'll be participating in three very interesting meetings on Internet technology (the smart object security workshop, the IETF, and IPSO).

But obviously, I don't love Paris enough to not try to escape during the two weekends that I will be there. I want to find snow! I packed my skis and other gear on the trip, and now I'll just have to find snow.

On the first weekend I have one free day, Saturday, and I was thinking of taking the TGV and checking out the world's longest indoor ski slope. (The big question is if it is also the world's least steep ski slope, but we'll see.) On the second weekend I have two days. What should I do? What's the easiest place to find real skiing?

I've done a couple of 48-hour challenges, with the intent of collecting as many ski areas and countries as I can during that time. I've managed up to three countries or five states on these trips.

But since I'm short of time now, I'll be doing an eight hour challenge on Sunday. I'll land in Riga, Latvia, and eight hours later I have to return my car to Tartu, Estonia. The plan is to get to a ski area both in Latvia and Estonia. My plan is to go to Kakisklans in Latvia and Kuutsamäe in Estonia. My original plan was to fly to Tallinn, but the skiing is surprisingly far away from there. And the heli-transfer between Helsinki and Tallinn operates only on weekdays. And the boats are too slow for one day trip. So I'll just fly again in the usual way.


But even this route is challenging. I have to get my luggage, the rental car, do all the navigation, and just the drive alone is four and half hours. Wish me luck! Hopefully the roads will also be in good condition and free of traffic, and that the border formalities or other police activities give me no delay.

And if by any chance you want to join, drop me an e-mail. We'll start early Sunday morning from Helsinki airport, or from Riga if you already are on that side.

Do you think I'll have time for after-ski?

I'm thinking of making an excursion to Estonia on Sunday to see what kind of ski hills they have. Anyone want to join?

I realize it is pretty bad weather for this. Or at least here in Finland it has been too warm in recent days, the spring is coming and snow is disappearing. It would be more fun to go when the entire landscape is covered in snow. I might even get to ski something in Tallinn or some other place that is not on a ski area.

But that is precisely why I am going. I've been working too hard for the last couple of weeks, building too many prototypes and coding too late in the night. I have not skied anywhere except on the local hill. My last trip to big mountains was a whopping three weeks ago. The snow is disappearing, summer is coming, panic is setting in. Must ski!

Does anyone have any information on Estonian ski areas? What do you recommend? The only one that I have found from Google is Kuutsemae. Do they still have snow? If I stay there for 6-8 hours and rent a car, do I have time to visit nearby countries as well? What if I take a boat and stay in Estonia for three hours, would I have enough time to check out Kuutsemae?

Posted by jariarkko at 3:47 PM No comments:

Everyone has probably seen the Facebook meme on six pictures for what your friends think you do, what you think you, and what you really do. I wanted to make one for skiing: 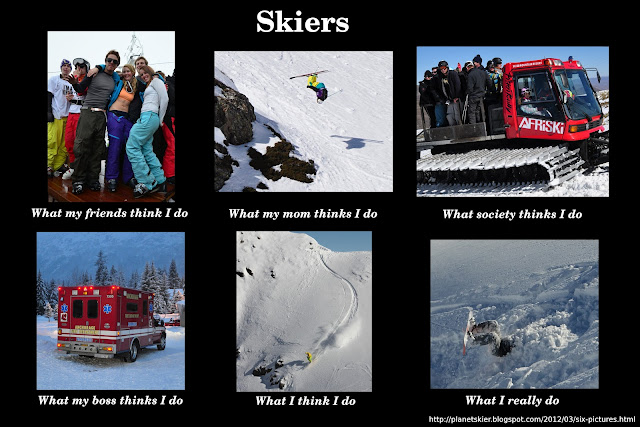 But many of you complained that this is completely unrealistic, and that the real situation is more like this: 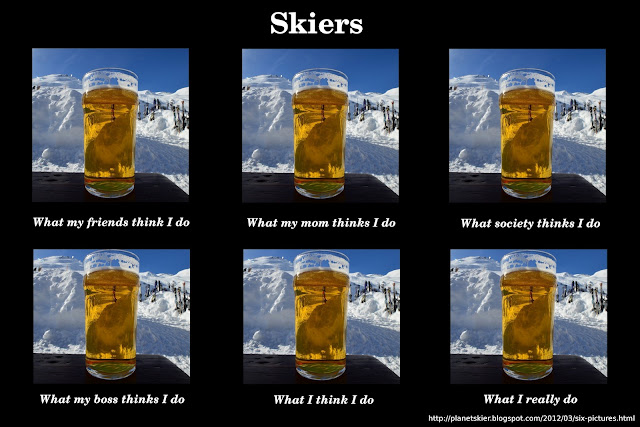 But people keep pointing this is still not quite right. OK, OK, I confess. Maybe this is it: 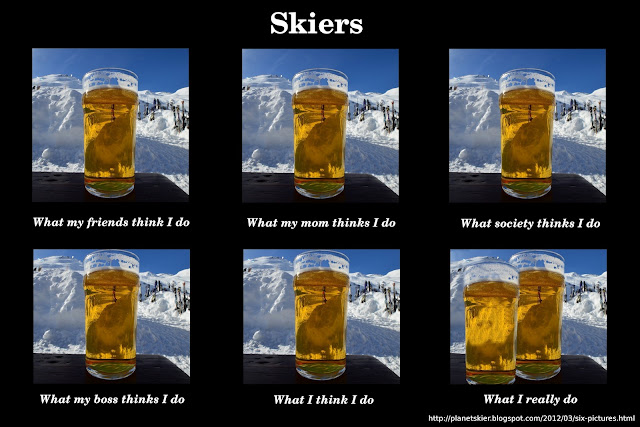 But of course, those who know me know that I drink very little if at all, and never beer. Or so I claim. I usually drink these if I can get them: 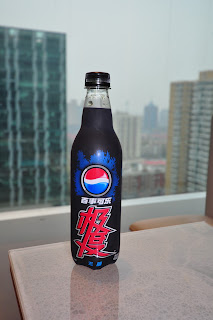 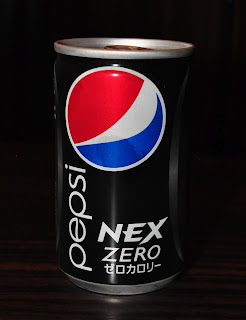 Posted by jariarkko at 2:36 PM No comments: