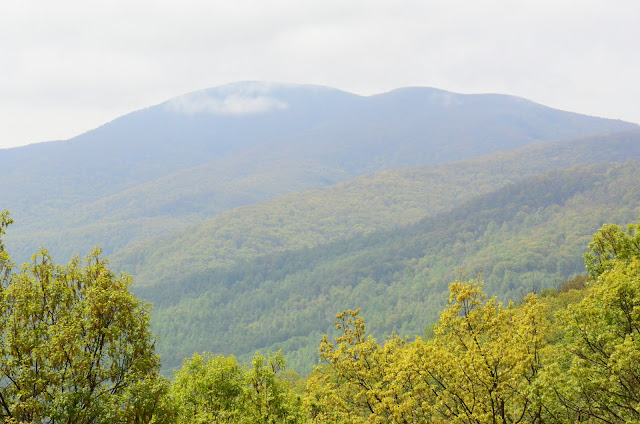 "It is bird poo". I'm looking at the ski area webcam and there is a spot of white on the green. My friend does not believe I'm seeing snow, and she is a local here in Virginia. But I think it is worth a shot, particularly since I have nothing to do on Saturday morning, having completed the week's meetings and heading back to Europe in the evening. 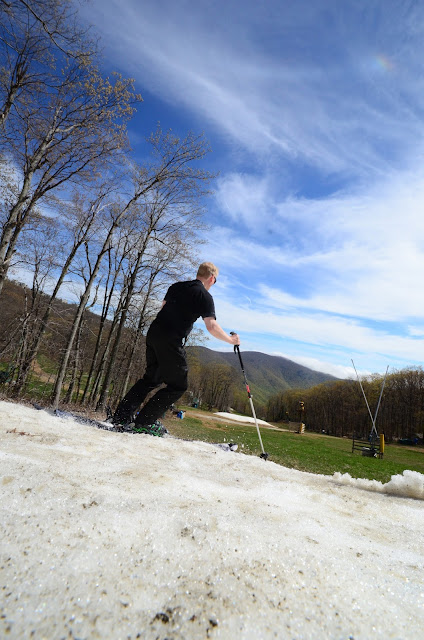 It took only six hours to drive to the Wintergreen resort and back, but it was worth it. The white spot was snow*. A two second run down the snow, and I need to head to the airport. Gotta admit the ratio of skiing time versus travel time was on the low side, though.

But I bagged Virginia. State #17 in North America. 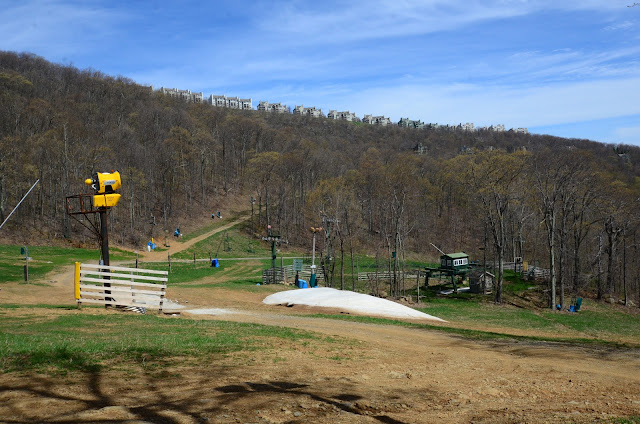 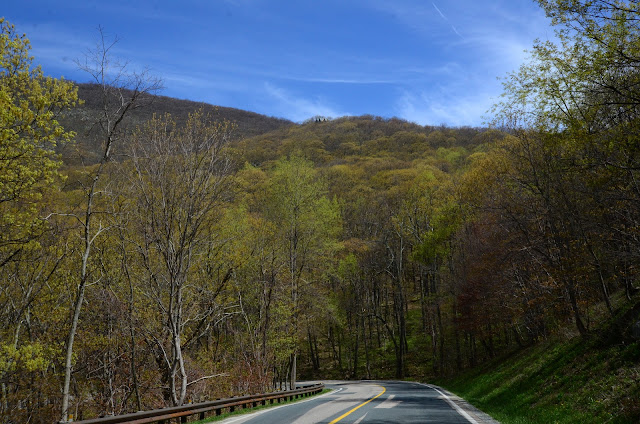 Virginia has no real mountains or very cold weather. As such, the skiing options are limited. I liked the Wintergreen resort, however. The area is full of accommodation, golf and ski opportunities, restaurants and other services. But most importantly, it resides on very beautiful hills. The Virginia countryside is just wonderful in May, when the trees display all possible variations of green colour. 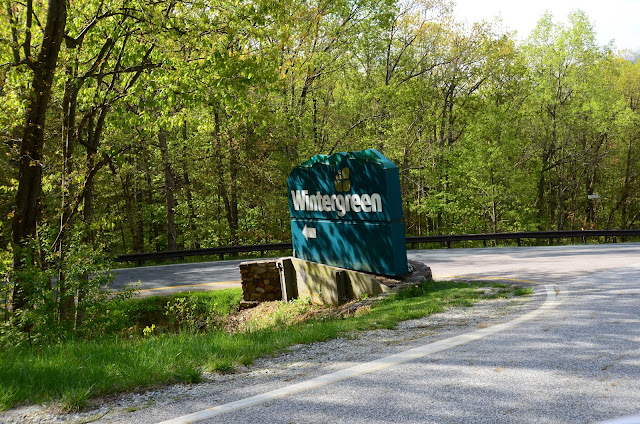 The ski area is a three hour drive away from Washington DC. 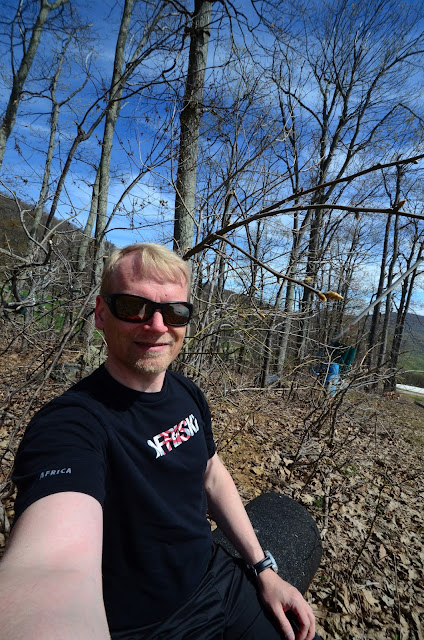 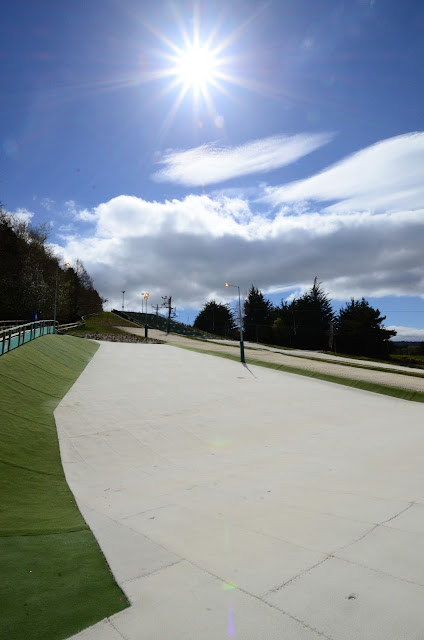 There is great skiing in Ireland. Even in the summer. Really.

It is Sunday and I'm spending the afternoon with Matt Campbell from the Ski Club of Ireland. We are in the outskirts of Dublin, sampling different qualities of fake plastic snow in the club's ski hill. I like the hard, brushy surface better than the soft, white beginner's surface. The white plastic feels like packed powder, but somehow I find the surface a bit too soft. I can understand that the beginners like it though, the 40 cm of padding under the surface will ease the falls.


The harder surface feels like a groomed, icy slope. It works best at high speed and is fun to ski, but you have to be prepared for it to be very slippery. I am particularly happy with the effect the sprinklers have on the ski slope, this is much closer to a real snow feeling than what I got in Edinburgh last year.

I feel bad about the sprinklers though, as Matt was kind enough to open the ski area just for me. I ask if they have to pay for the water. Luckily, the answer is no. The water comes from a stream, and can be reused. 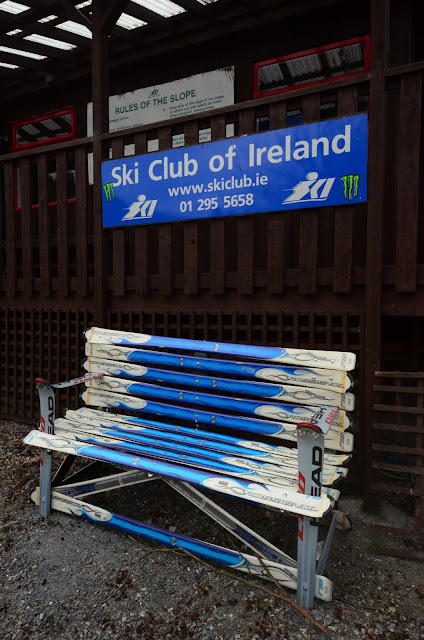 By spraying water, the ski area could be operated through the year. Not that there is usually any snow in Dublin in the winter, though on some years there may be snow for a week or two. But the customers are unlikely to come during the summer, so in practice the ski area is open only from November to March.

Skiing on the hard surface is a bit unnerving though. The large holes in the brush pattern are likely to catch your thumb if you fall. Or the surface can hurt your skin. This is why I'm skiing with gloves on, and with pants and a heavy jacket. And I'm discovering one reason why the crowds may not spend a lot of time here in the summers. These clothes are pretty warm for the weather. 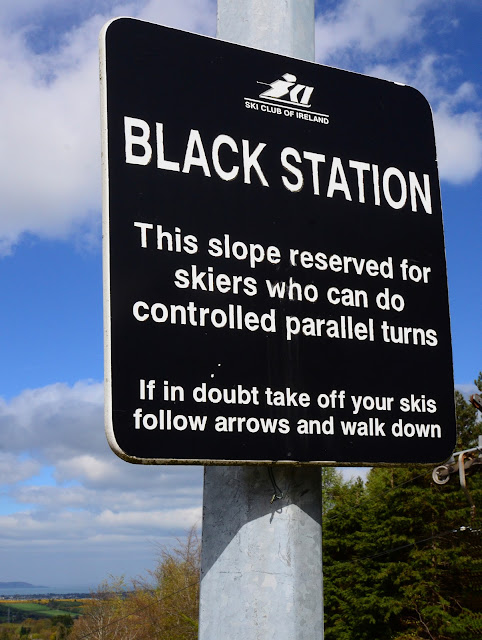 The ski club has three slopes and four ski lifts on its small hill. A cafeteria, rental equipment shop, and ticket office are housed in a small building next to the slope. This is yet another community owned and volunteer-operated ski area. The club members organise races, practice on the runs, and also embark on joint trips elsewhere in the world. Wonderful! 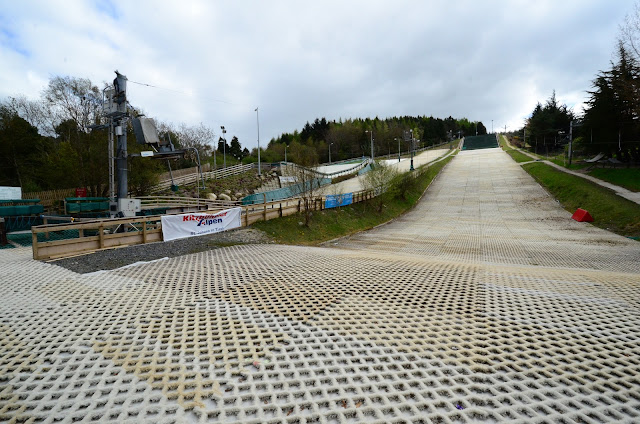 By the way, normally I love travel. But now I am exhausted. I'm on a work trip where the timezone changes every couple of days from Finland to California to DC to Dublin to Geneva. Several weeks on the road, not having enough time to fly home even for weekends... and weekends are spent in the air, not getting enough exercise that I would need. On the previous day I got literally two seconds of skiing. Don't get me wrong - this has been a very exciting trip work-wise and the people that I met were just wonderful. I just wish I'd have more time to rest between stops. And I'm flying to Geneva and not having time for skiing. Imagine that!

At the top of the ski area there are some ice-looking pieces. These are wax for the skis! 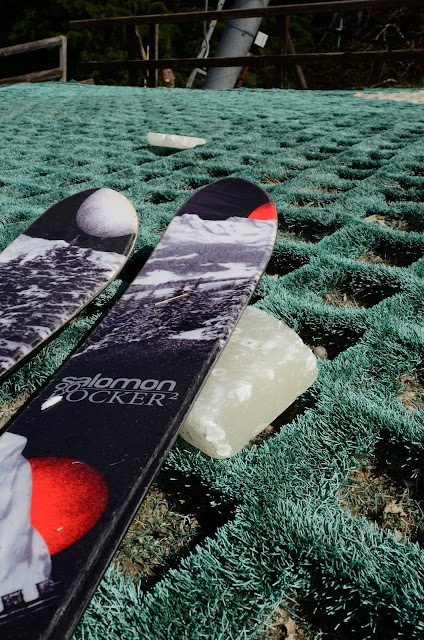 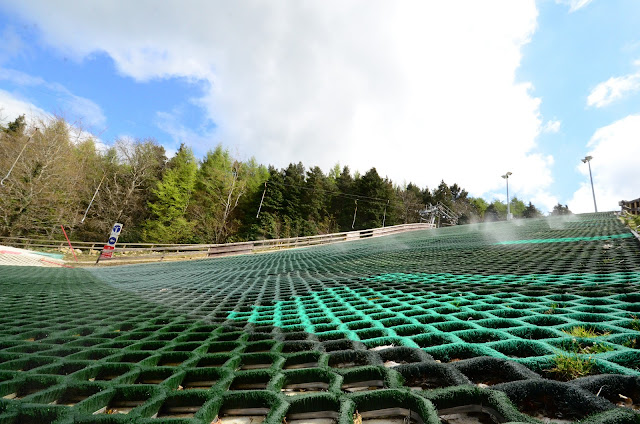 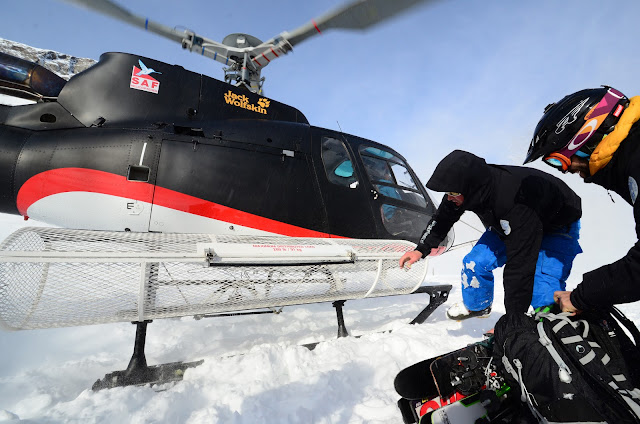 Gotta love the French. Masters of bureaucratic directives. Or circumventing them. Take heliski, for instance. Heliski is illegal in France. But here we are, spending a day with skis and helicopters. For only 60€, to boot.

It turns out that it is illegal to use a helicopter to take us to a mountain. But there is nothing that prevents using one take us from a mountain. So we are using the lifts to take ourselves to the highest mountaintop in Alpe d'Huez, Pic Blanc. And then we ski the backside, choosing any route as long as it gets us to the small village of Clavans le Haut. A scheduled heliservice will then pick us up, and five minutes later we are back in the central parts of Alpe d'Huez. At the cost of only 60€ per a run. Each run is over two kilometers of vertical and in an amazing backcountry that takes time to negotiate through. You can only do one or at most two runs per day. The costs are amazingly low for heliskiing, although for the first time you have to get a guide to learn the route. 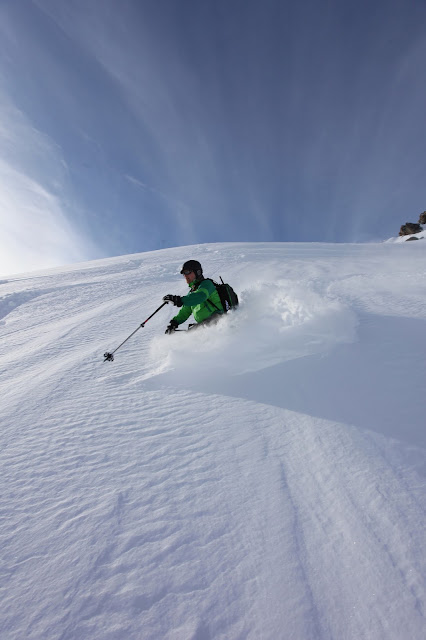 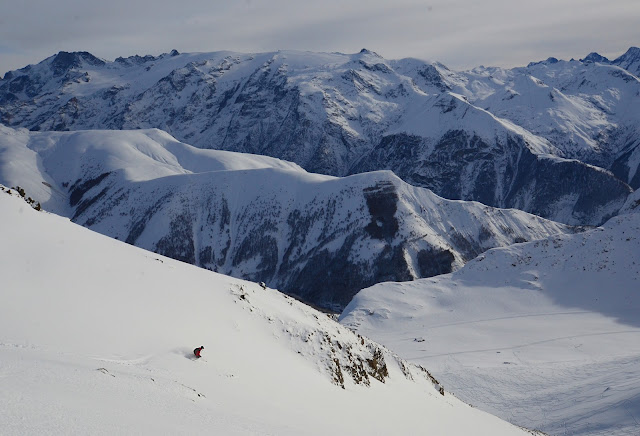 The ski route that we chose was Glacier du Grand Sablat. 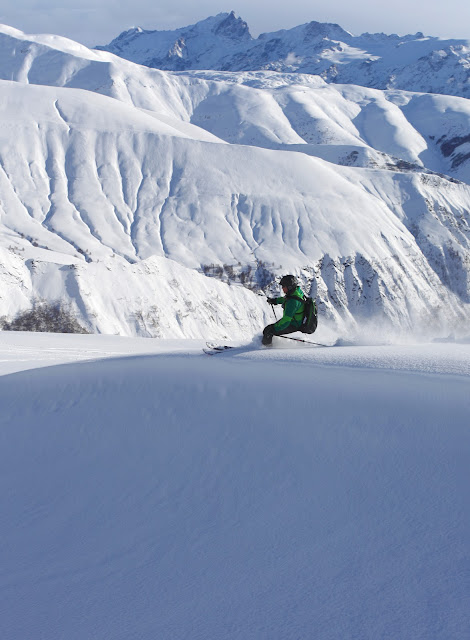 I have never been to the expensive heliskiing operations in North America that can set you back 5 000$ or 10 000$ a week. And not just because of the money. Somehow these ultra-luxurious services are not even attractive. People who take them boast about the amount of vertical they get to do during the days and how it is all only perfect powder. But for me, skiing only powder would be akin to drinking only Champagne. It would get boring very quickly. You need to put in some effort as well, some traversing, skiing on in difficult conditions, or walking should be required. And the route in Alpe d'Huez had that. We do get back by the helicopter, but before that we've traversed a bit, walked a bit, and experienced all snow conditions from a meter of light powder to ice and wet slush. 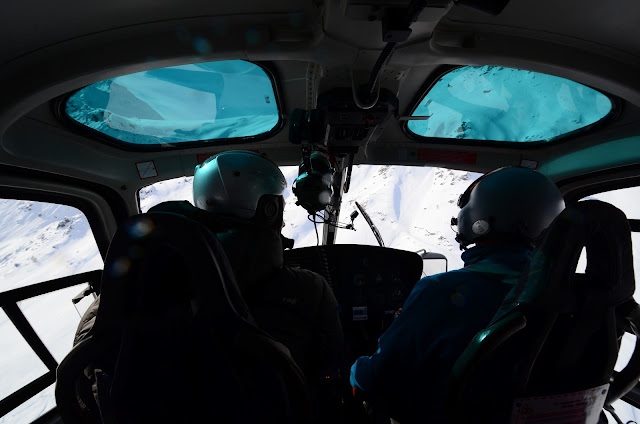 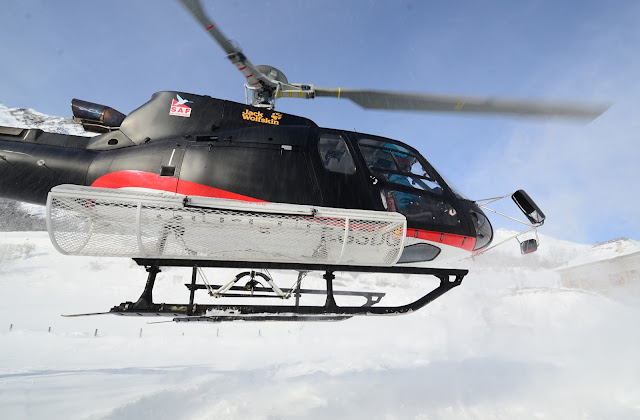 A couple of years ago we paid 300€ for one special-request heliski ride in Alagna, Italy. We landed on a col near Monte Rosa, at 4250 meters and my skiing altitude record at the time. Even our half-empty copter was struggling to generate the lift to move at these altitudes. When we landed, we had to stay under the helicopter as it lifted off, for we could not put our skis on near the helicopter. And moving on the glacier without skis even for few meters could have been dangerous. The three kilometer run down the mountain from this spot was an adventure, including for instance, having to ski roped through crevassed areas.

A long, long time ago I went with a student group to Kittefjäll in Sweden. At the time they had one ski lift and two helicopters. At the end of the season the cost of full day heliskiing in the nearby mountains was 50€. The pilots doubled as bar tenders in the evening. I do not know if this service still exists or even if the place is still there, but it was a great experience. And again, the snow in the mountains in Sweden is not all powder. But skiing on hard, wind-blown snow forms on top may have been more interesting than mere deep powder.

The next day at Alpe d'Huez we returned to the same route. And took our time exploring the area and taking photographs, ending up at the village too late. The last heliride for the day had already gone. What now?

We succeeded in hiring a local farmer - who spoke no word of English - to take us back to the ski area with his car. A forty kilometer ride later we had gone around the valleys and had reached the closest ski lift. With just a couple of minutes to spare before the lift would have closed. 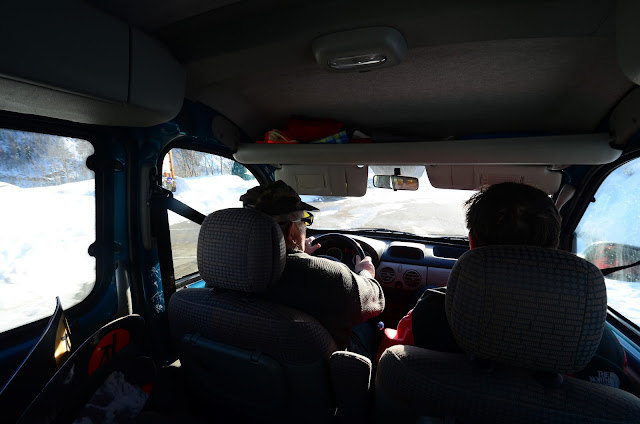 Ready to Walk Back?

On the third day we chose to abort our descent just before dropping into the village, and have our guide lead us on a hike back to a ridge where we could ski to Alpe d'Huez. The vertical rise was not more than a few hundred meters, but it was a tough walk for me. At the top of the ridge we reached a hut and enjoyed a drink. Interestingly, a barrel sauna was sitting next to the hut. It would have been even more fun to be able to use it. But we were due back to the ski area, and had no time. 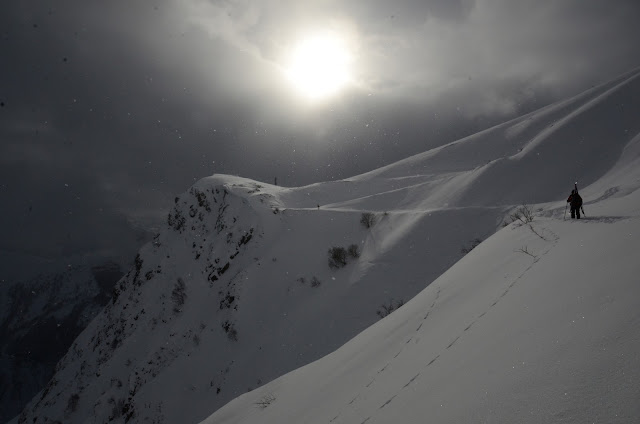 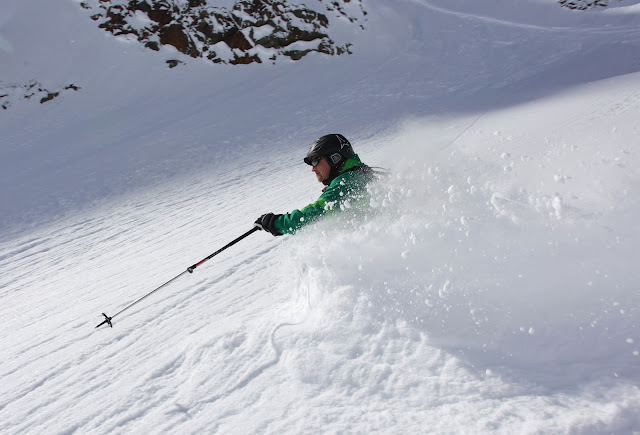 We hired our guide from the ski area's guide office. Our guide was Patrick Guillaume. 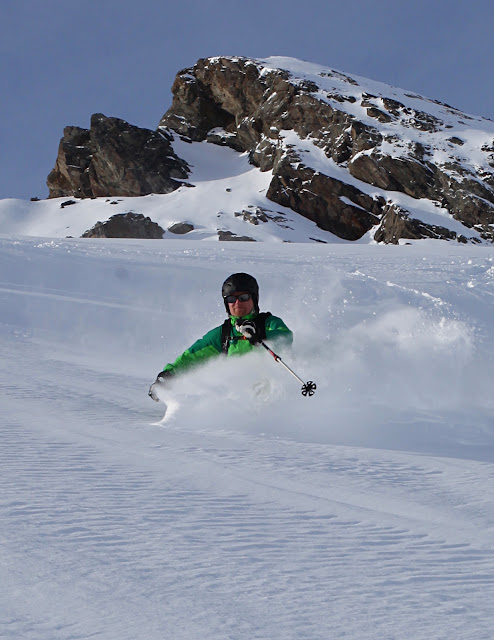 This article is about our trip that happened in January. An earlier article described the tunnel ski run, but I ski too much to be able to write about everything on a timely basis.

Here is Jarmo's full-length video about our trip to Alpe d'Huez: