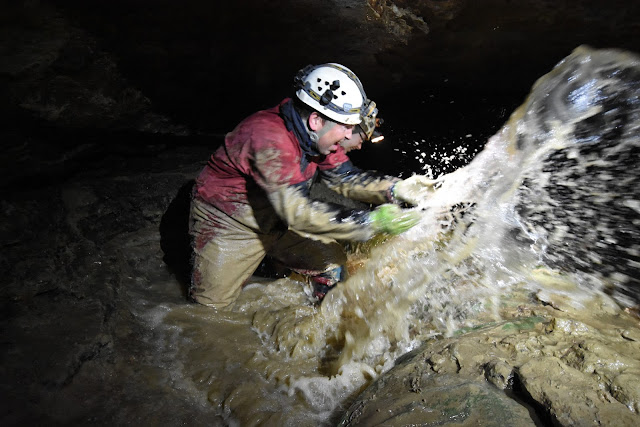 This is an exceptional opportunity that only opens once a year. Janne and I are crawling in the cave, guided by friendly cavers from the Swedish Speleological Association. We get to see amazing things,  from stalactites to "Inre Sjön", a small lake (or rather, a pool) a kilometer into the cave.

Lummelunda cave is in Gotland, an island 90 kilometres east of Swedish mainland. The cave is Sweden's 2nd longest cave at 4.5 kilometres. The cave has two main branches, the dry (or not flooded) fossil branch, roughly two kilometres long, and the wet branch which is a lot of fun with boats, swimming, and plenty of mud. However, to reach further parts of the wet cave some diving is needed, as the cave system has a number of sumps.

We've been to Lummelunda before, both on a tourist walking tour in the show cave part, as well as on an organised adventure tour to the wet branch. That was a lot of fun, but no comparison to being able to explore on your own. Or go further into the cave.

This delicate cave is opened once a year for the cave explorers from the Swedish Speleological association (Sveriges Speleologförbund or SSF) to look at. The rest of the year the cave is closed to protect its stalactites and ecosystem. Outside the summer, the cave may also have more water, which would make exploration harder.

This year, 53 willing explorers came to Lummelunda, from babies to adults. Most of the explorers stayed at a tent camp on the beach, but we for instance stayed in a nearby hostel, Lummelunda Vandrarhem. I liked the ability to visit their sauna after caving 😀 But it would also have been fun to be at the camp, and we spent a lot of time in the camp actually. Every morning there was a meeting to talk about the day's plans.

Janne and I wanted to visit the fossil branch. You have to pass the wet parts and do some boating in the cave before the "dry" part begins. The dry part isn't really dry either, there's plenty of water and wet clay on the way. And by the time you even start the dry part, you've already had to dip your almost entire body into the water to get there. We chose to wear thin wetsuits, and a caving coverall on top. This also made it more fun to crawl and drag ourselves on the sometimes sharp rocks. But I was maybe a bit too warm, at least when we were going fast.

One kilometer from the cave entrance the fossil branch reaches Inre sjön or "inner lake". This is a small area that is usually flooded. For the Lummelunda week it is however pumped to make passage possible. There's a drill hole to the surface in the chamber above the lake, where power for the pump and pipe for the outgoing water can pass.

Once through the Inre sjön, the cave continues for another kilometer, ending in Sifonkatedralet, the biggest chamber in the dry part. Why the biggest chamber is at the end is a mystery, and repeated attempts are being made to see if it possible to continue further. We stopped at the Inre sjön though. Hopefully we can continue further next year, but the trip to Inre sjön already took 3.5 hours, 1.5 hours to crawl in and 1.5 hours to crawl back. It is amazing how slow the progress is. There's no real tight passages, but there are passages where you don't have much room to move, and are already swimming half way in cold water and wet clay. There's also a couple of parts where you have to move slowly and carefully to avoid damaging the stalactites.

And I have to say, after coming out from the Inre sjön trip, I felt pain everywhere on my body from the crawling and the rocks. I felt if I'd never go into another cave I'd be fine with that. But, the next day we were eager to go back 😀

Inside the wet section of the Lummelunda cave there are many interesting parts, mostly for divers but also for the rest of us. Like the Sälpromenaden, a very tight hole that one can crawl into. I went in to try, just a meter or two in. It is a tight hole, crawlable, but for instance you might not be able to turn your head from side to side. And there's a point where you have to empty your lungs to squeeze through. But the real demand in this hole is your own mind: the hole continues for 20-30 meters, and there's no turning point. You have to crawl backwards to come out. Stuff of the nightmares for the claustrophobic! Sälpromenaden is one thing I will NOT do next year. 😀

Research continues to find new cave parts. A small dam has been built to block water from going into the Rabbishålet, a low and muddy crawl to some recently found new parts of the cave. On the day that we went past Rabbishålet, the water inside the dam had not yet been pumped out, though Ralf and Tor attempted to empty the pool on their bare hands, not making much progress.

We also visited the Kanal-project, a set of cracks at the bottom of a dry, man-made canal. The cracks led to small caves that are likely connected to the fossil section of the Lummelunda cave. The biggest chamber and the end of the fossil cave is only 100 meters away. The team is investigating if the cracks actually lead there, and if they are passable. The cracks need to be at least cleaned from debris first, though.

Another project, Bryet is a few kilometres further out, a crack system in a forest, and the possible initial starting point of the Lummelunda cave system. That is a very challenging place to cave at, very tight passages.

Oh, and I should thank everyone who helped make this happen: the organisers, but in particular the other two Finnish cavers who came over, Ralf and Tor, the special project enthusiasts Åsa and Per, and our Inre sjön guides Leif and Jonas. Thank you!

It also seemed like overall, this was an easy group to join as a beginner.

Here we are on a morning meeting at the camp:

The camp was in front of the sea, with nice views: 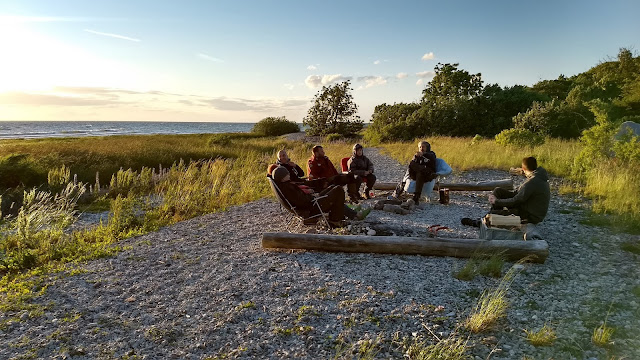 Back in the Lummelunda cave, these are the cave formations on the way to Inre sjön: 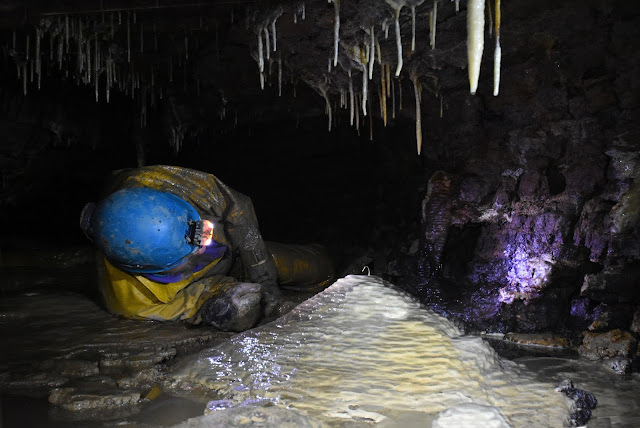 You have to be careful (and be watched) to not break anything: 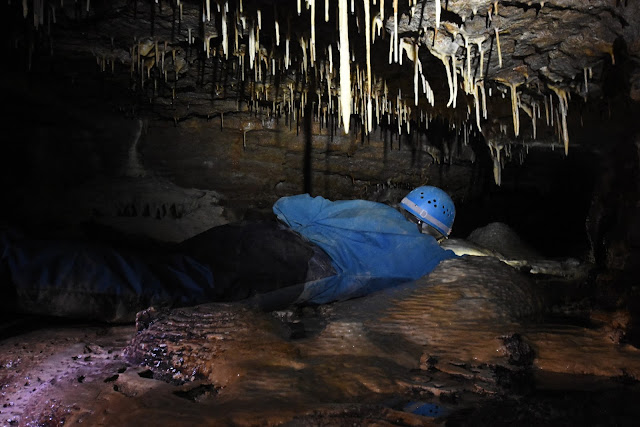 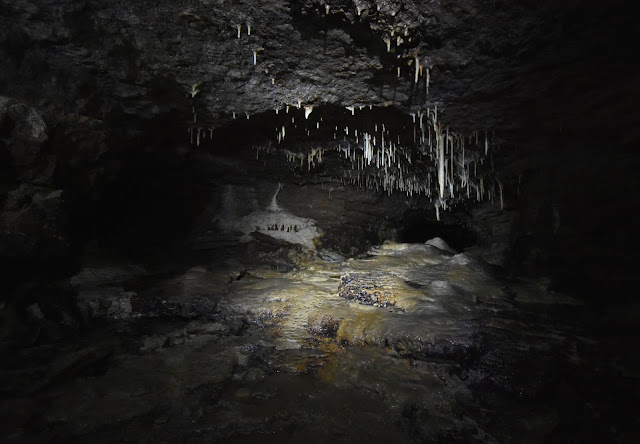 Personally, I liked this flowstone colours and forms a lot. What do you see? 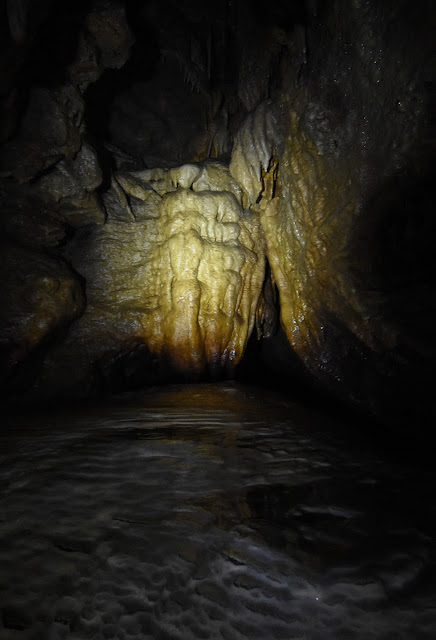 At Inre sjön, there is a power cable in and water pipe out, for the pumping: 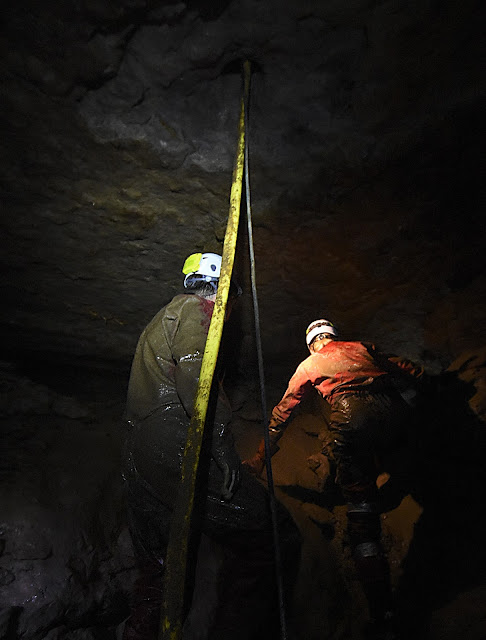 Here we are resting in a small chamber on the way back from Inre sjön: 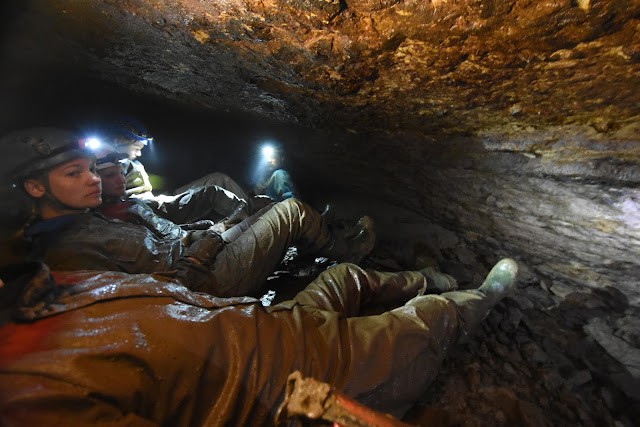 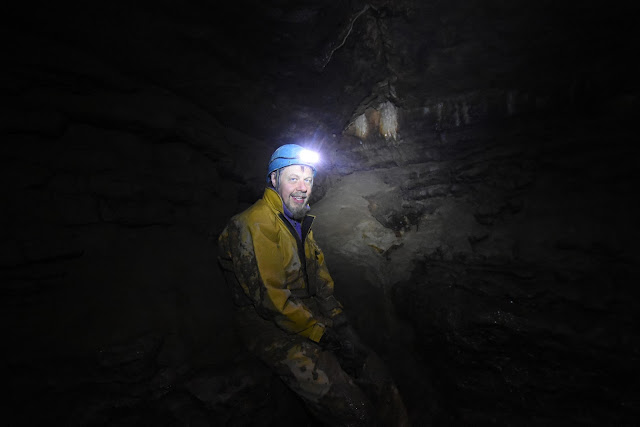 We spotted a small fish on the wet side of Lummelunda: 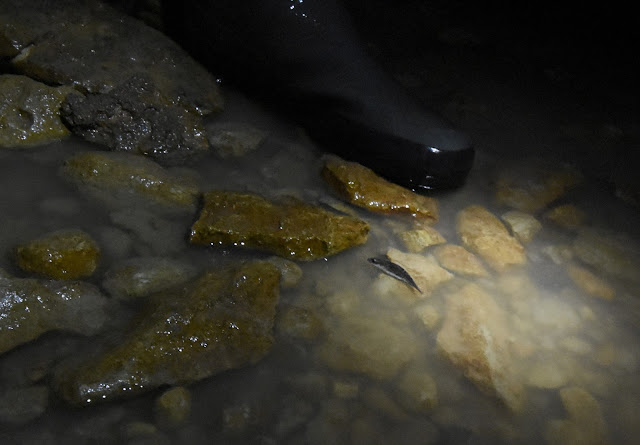 There is also dry caving on the wet side, here we are in the chamber next to Sälpromenaden: 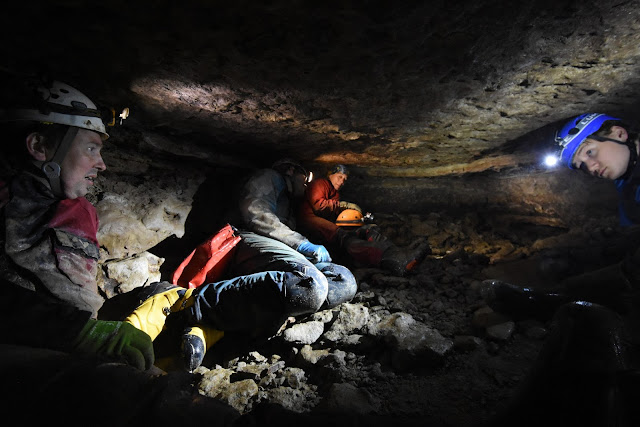 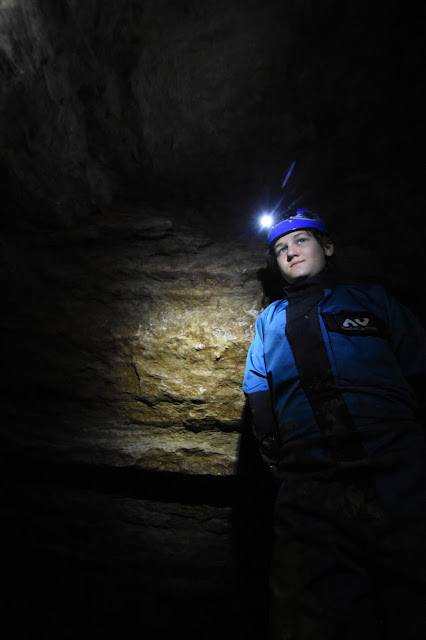 Ralf goes in to Sälpromenaden: 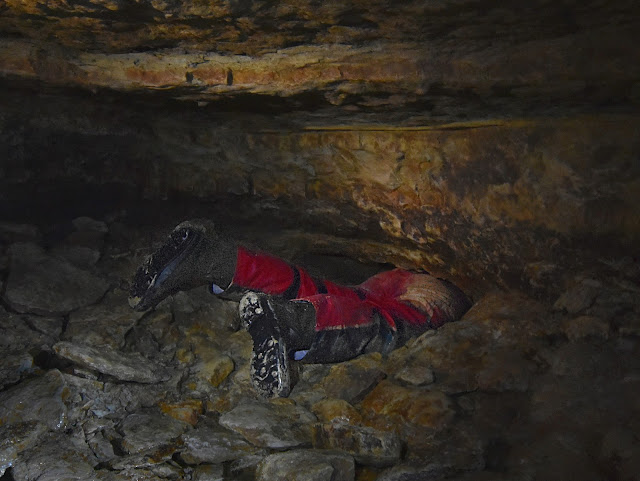 Here the team is investigating possible new openings in the Kanalen-project: 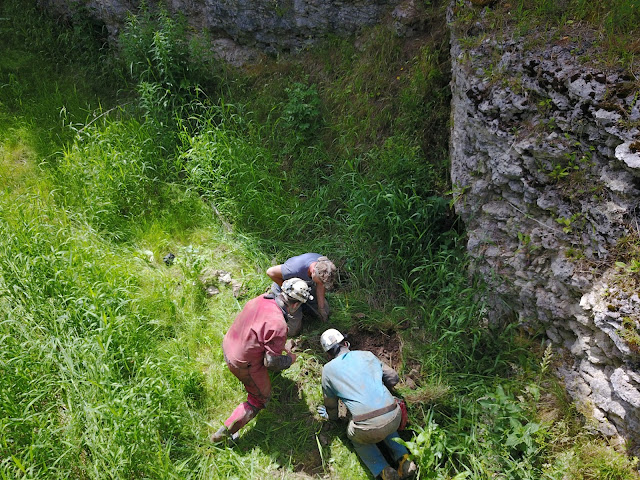 ... that turned out to lead nowhere: 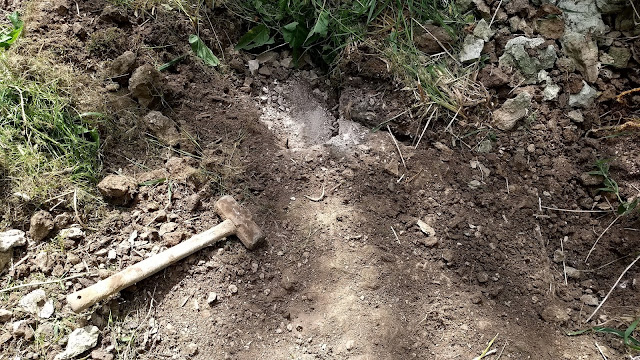 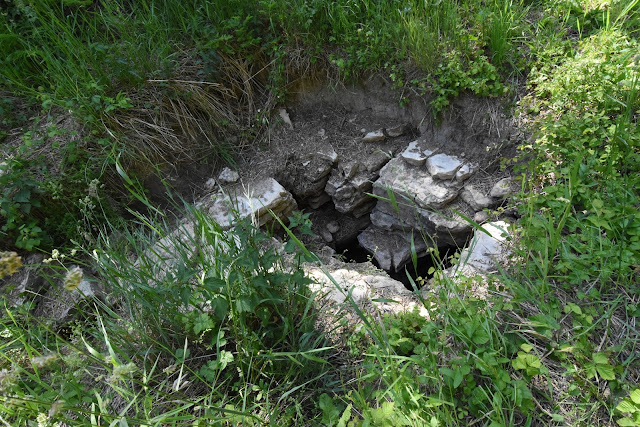 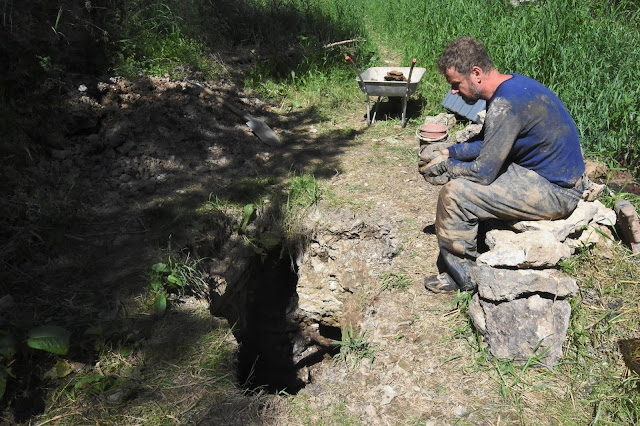 In the nearby Bryet-project, there is a set of cracks that might be the starting point of the Lummelunda cave: 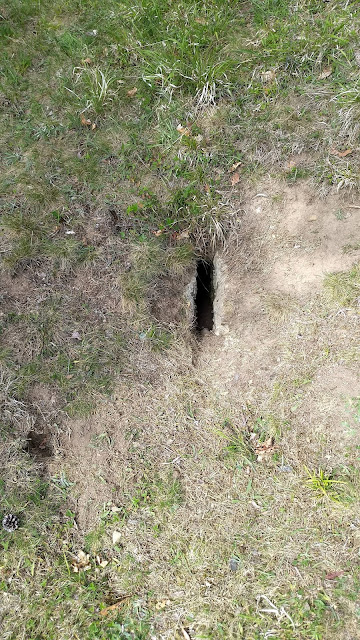 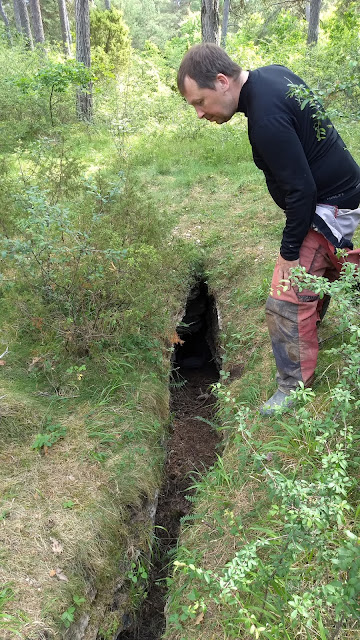 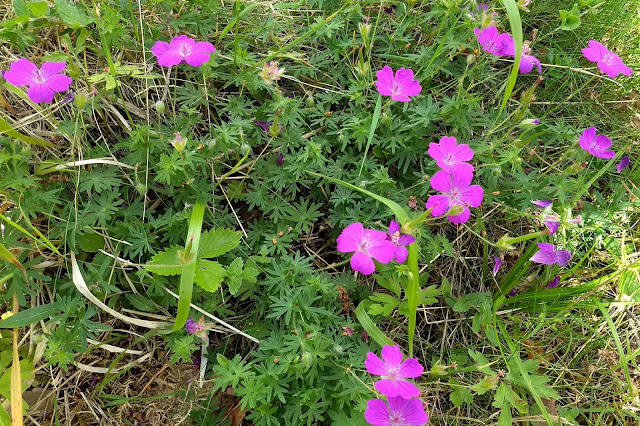 Per and Ralf next to the hatch leading to the main part of the cave at Bryet: 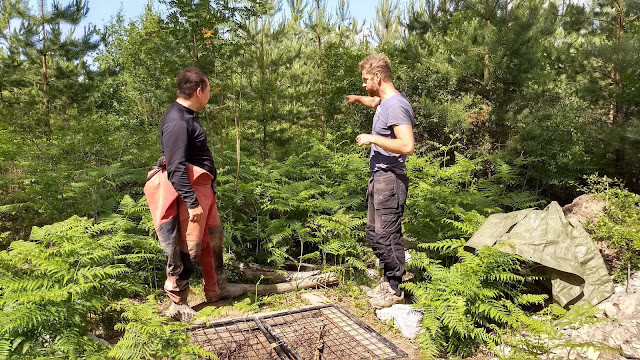 Ralf and Åsa investigating a pond that might be the ultimate starting point of the Lummelunda cave in Bryet. 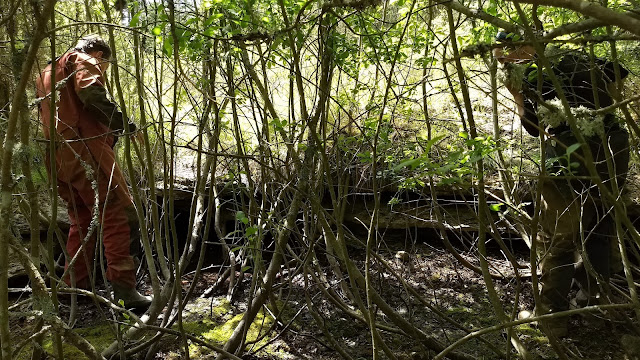 Galgberget near Visby has the ruins of an execution platform. Ewww.: 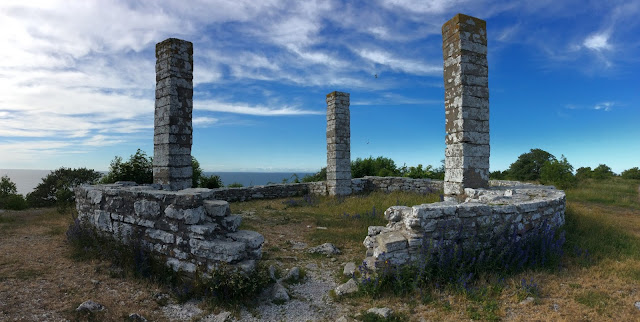 There's also a small cave nearby: 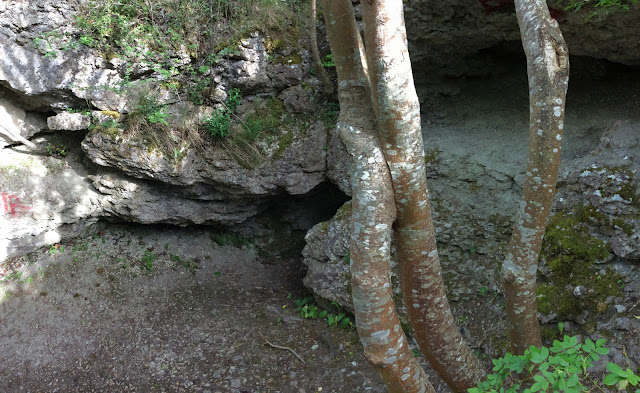 Remember that pointers to all my stories about caving and skiing can be found at the ​Planetskier.net and ​Planetcaver.net web sites.
Posted by jariarkko at 4:31 PM