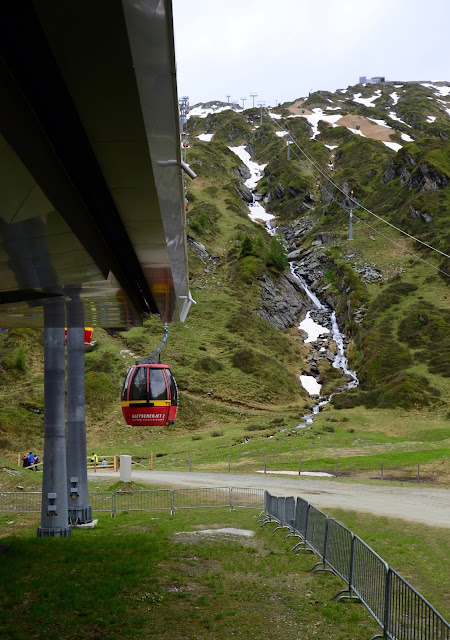 The girl at the sheep farm gate is from Qatar. Most tourists here seemed to be from Middle East, so I ask her why she had come to Austria: "Because it is so cool, and the weather is nice." We are standing in cold rain, but I guess she prefers a change to the weather at home. But come to think of it, I too prefer cold and rainy. I am on a family vacation, and my son Janne really wanted to go skiing. (I don't know if it is genes or training, but I'm not complaining.)

But back to the sheep. We had done the usual summer skier routine, skied the glacier near Kitzsteinhorn here in Kaprun. But I wanted to do something else for my last run, with Janne already enjoying a lunch in the valley.

I wanted to ski all the way down to the station at 1976 meters. The only trouble was that there really wasn't much snow left. The ski patrol advised against it. The route looked nasty from the ski lift, and I'd have to walk quite a bit. No matter. There was a stream running through a steep gully that still had some snow left. 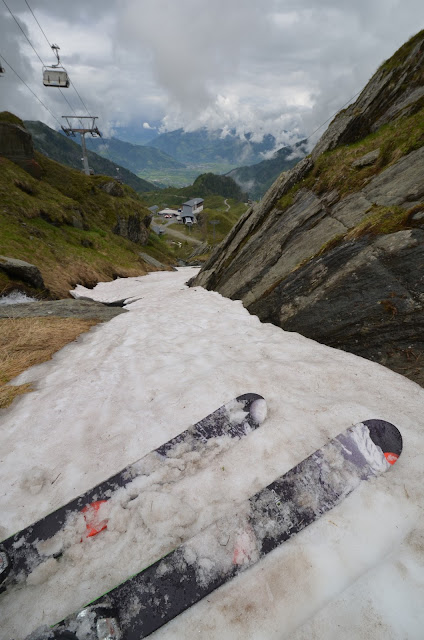 My route runs under the Langwiedbahn chair lift, and it turned out that I only had to take my skis off for one small part. And at the end I had to walk down maybe 100 meters and cross a few streams. But what a wonderful run! The gully was narrow, occasionally narrowing down to less than my ski's length. The snow had not been touched by other skiers for a long time. The snow was soft and it was a pleasure to ski. In the winter this route is an off-piste run called X5, The Pipeline. The only danger on this route was from accidentally falling through the snow cover to the stream. There was not much water, but it was still scary. On one point the snow fell off under me, but not enough to sink my skis in.

And on the walk down, I met my new skier friends, the sheep. They were running scared, however. I'm guessing they do not see too many skiers. And to be honest, this part of the mountain was more suited for pasture than for skiing. 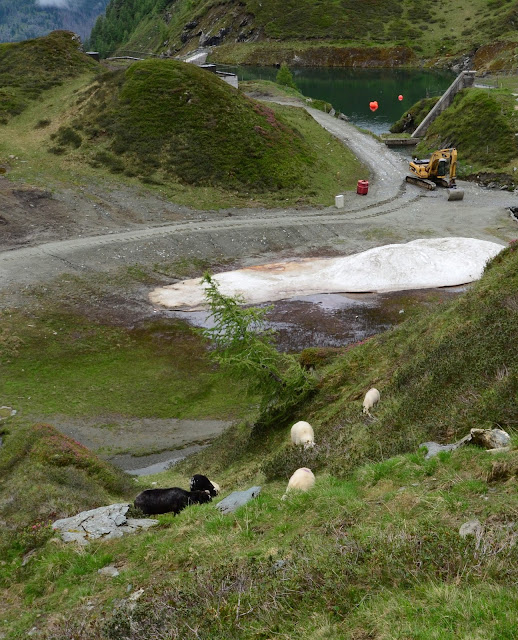 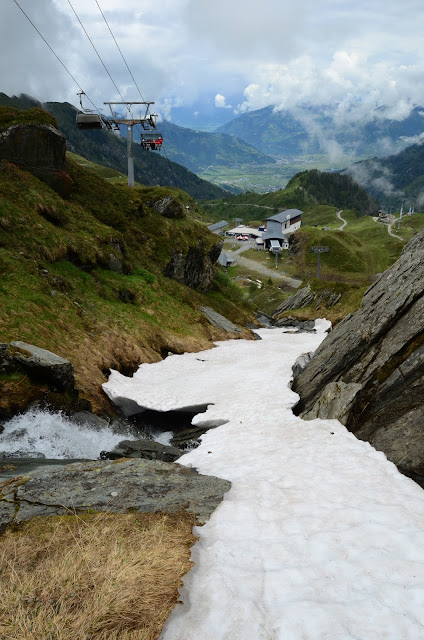 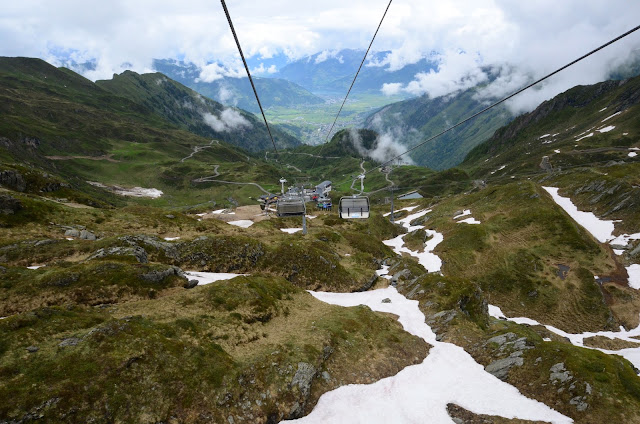 You need to take four ski lifts to reach the glacier skiing area. The slopes sit next to Kitzsteinhorn, the highest peak in the area. The skiable part is actually surprisingly large, I was expecting a tiny slope. There is about 500 meters of vertical to be skied. Many national teams train in this area, we saw teams from Austria, Switzerland, and Russia.

The area feels relatively flat, however. And due to its relatively low altitude - 3000 meters - the snow seemed softer than on some of the other summer ski places that I have been to. I usually enjoy the early mornings when the slopes are still hard ice. Not that skiing soft snow is bad - I like it too. But it tends to stick to your skis and make you feel like you are falling. Particularly if you go outside the tracked area, unless it is steep enough. 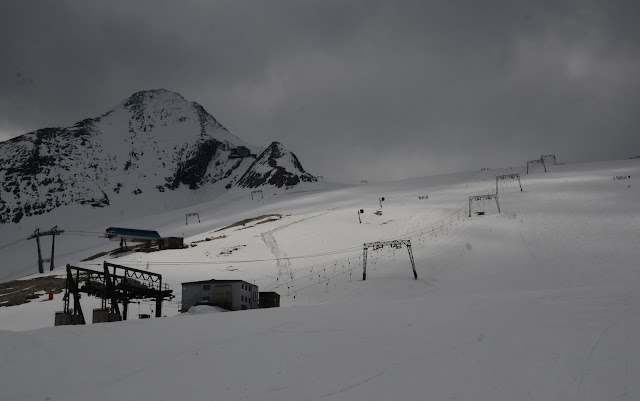 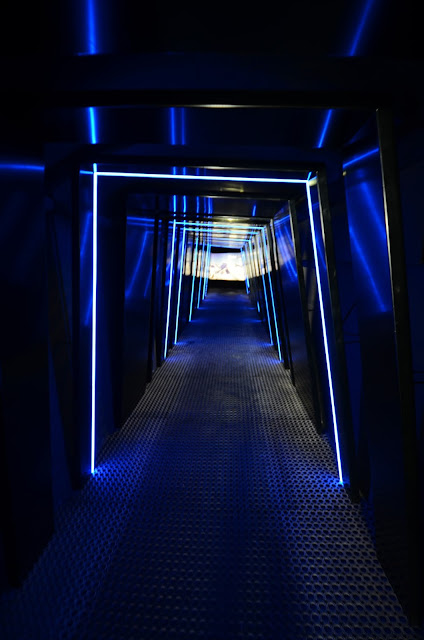 Where Did the Eskimos Go?

We also found the abandoned ruins of an igloo village. But no signs of the eskimos! 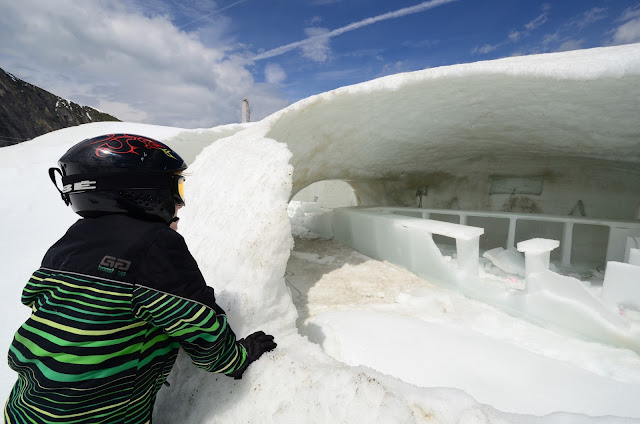 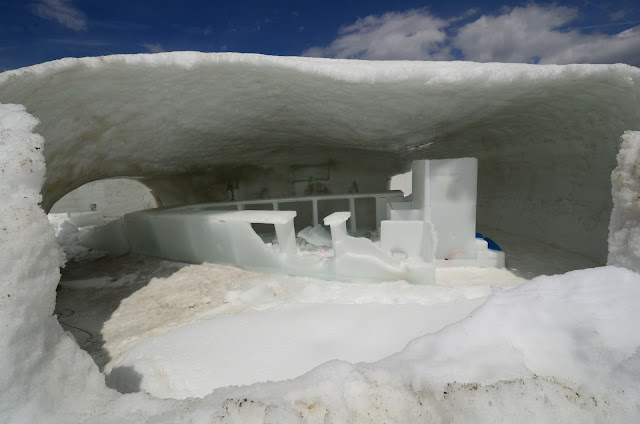 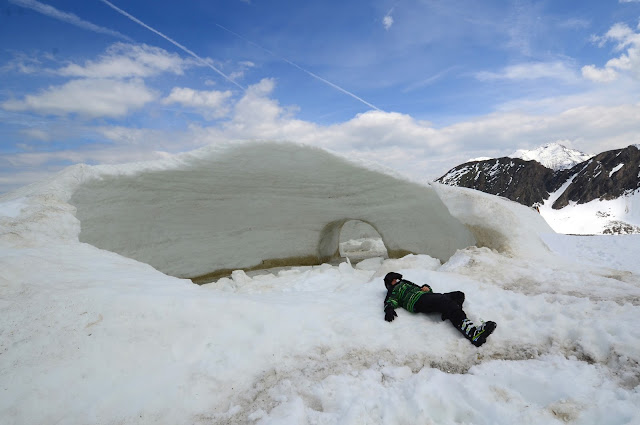 I also liked the design of the restrooms: 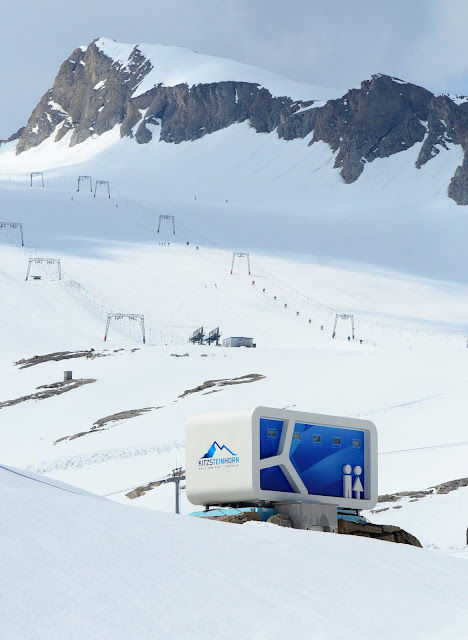 In the winter the skiable area is much larger, and there are many opportunities for adventure. And danger. My previous visit was in the winter, and even if I only skied one run I found out that I had taken too big risks. I made it, but barely. 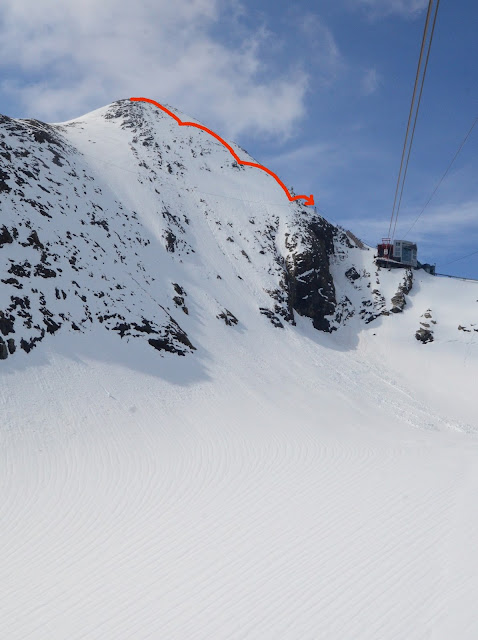 The ski lifts in Kaprun work well. I liked the Gletscherjet cabins. Floor photo of the round cabins is here: 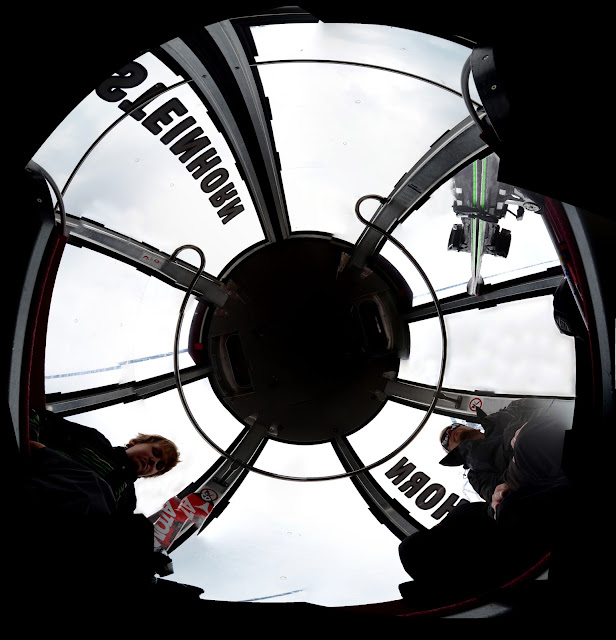 As many people may remember, Kaprun has a train that runs through the mountain to one of the top stations, but after a catastrophic fire claimed 155 lives in November 2000, the train has not been used. The track and stations still exist, providing an eerier reminder of the tragedy. The ghost train of Kaprun. May the victims rest in peace.

We stayed at Hotel Antonius, a very nice, medium-size hotel in the Kaprun village. Interestingly, the full board option for the whole family cost less than just having the room, so we decided to take that. Full-board included also access to their spa area - except that it wasn't for kids. Apparently the Austrians consider saunas improper for small kids. Not how we would do it in Finland... 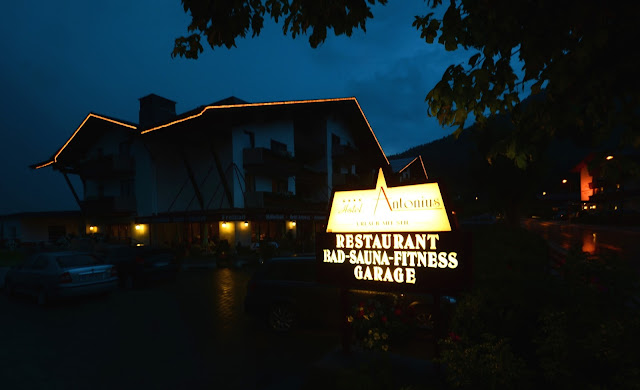 Here's a street sign from the Kaprun village. I don't know what this is, but it certainly looks like my kind of a working group: 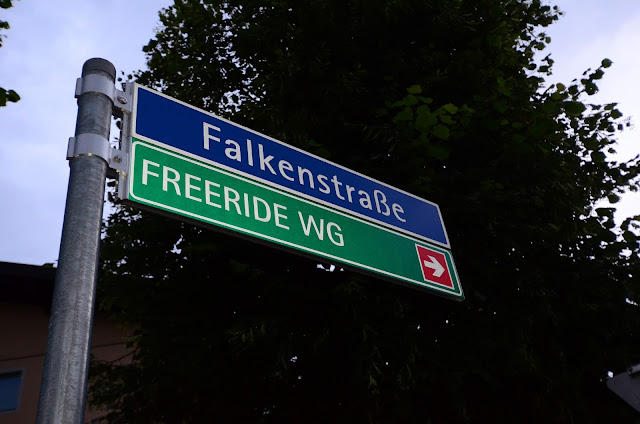 The glacier is well equipped with bathrooms and other facilities. Here you can choose your direction based on the seriousness of your emergency: 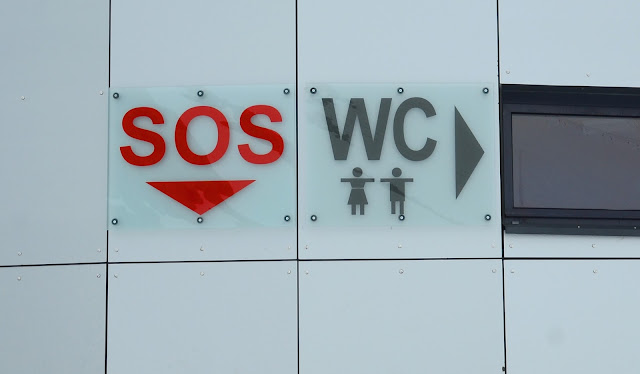 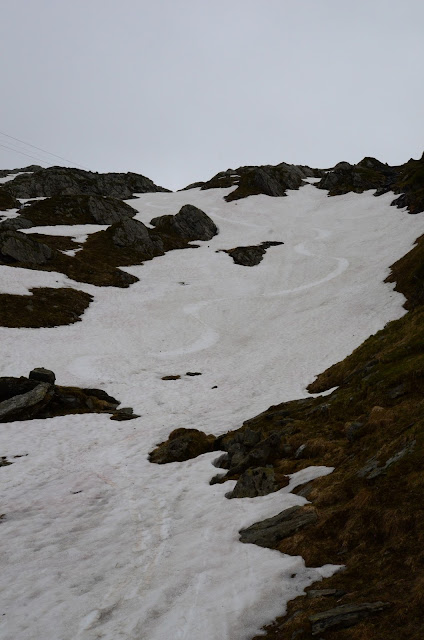 Our summer vacation was not entirely spent skiing, by the way. In addition to liking skiing, my son insists on visiting aviation and technology museums. We did a wonderful tour of museums in Munich, Sinsheim, Speyer, and Frankfurt. In particular, I can recommend the Sinsheim and Speyer museums as one of the best museums in the world for covering aviation. The only downside of this trip is that my ankle has gotten very sore for some reason. Maybe too much walking in the museums. Lets hope it heals soon, so that I can get back to skiing. And walking.

The following picture is from the mining demonstration in Deutsche Museum in Munich: 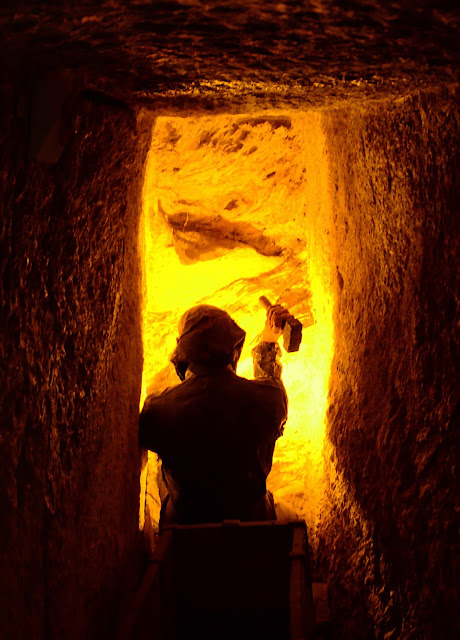 Posted by jariarkko at 5:05 PM