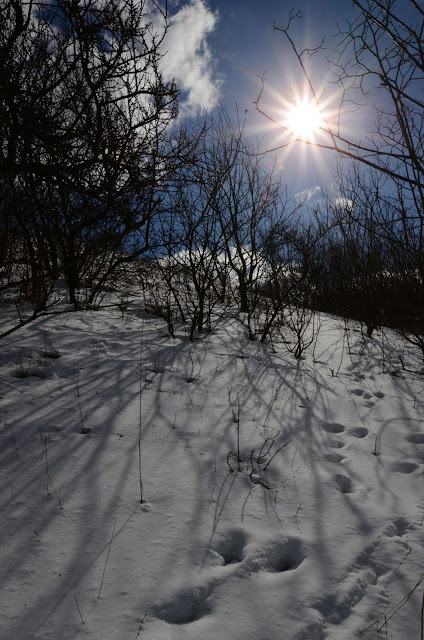 Sunshine, snow, skislope, grill, loud Schlager music... Clearly, I must be in ... Denmark. This is a yet another one of my quick Sunday trips, this time to collect my 35th country. 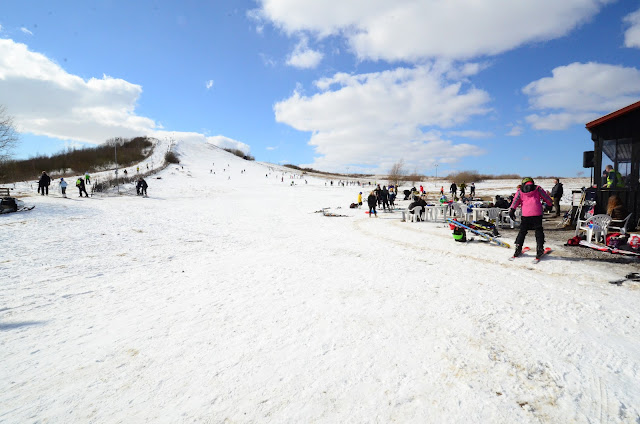 I am at the Hedeland Skibakken, a small club-owned ski slope near Roskilde and 30 kilometers from the Copenhagen airport. It seemed like the entire village had come to the ski hill, as so many volunteers were helping to let a crowd of small kids enjoy their day on the slope. The community participation reminds me of my own local hill in Kauniainen, or Mad River Glen in Vermont.

This is the largest ski area in Denmark. Yet the ski hill is only 45 meters high. The hill is not natural, it was constructed in the 1980s. Today it has three aging ski lifts, a cafeteria and ski rental shop. 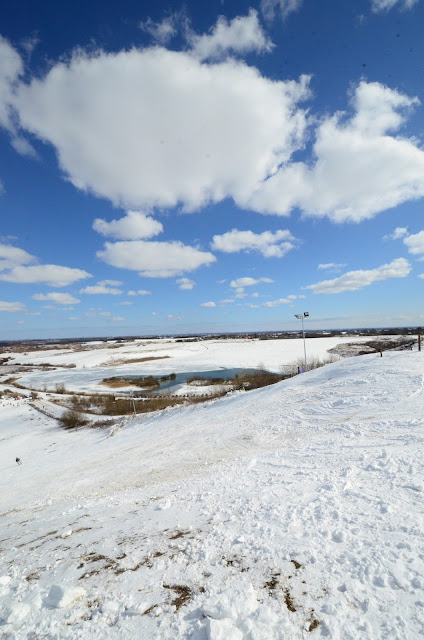 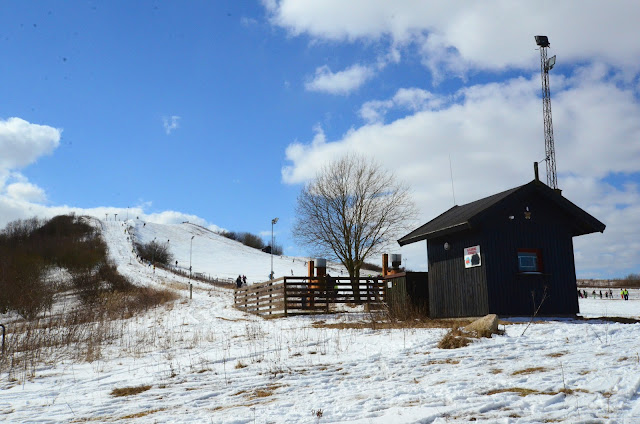 The numbers are not impressive. But still, the area is impressive. My visit was on the probably their last open day of the season, and the slope was full of small kids wanting to learn skiing or snowboarding. A large number of volunteer workers had joined to operate the lifts, run the grill, and work on the snow cover. Tickets and food were cheap. None of the facilities was all that modern, but everyone seemed very happy to try to help the kids have a great day. And me.

Although I must have been the only adult on the slope, or at least the only adult without my own kid with me. And definitely the only person who took an international flight to come here. Possibly ever.

Here are some pictures of the snowmaking activities on the slope: 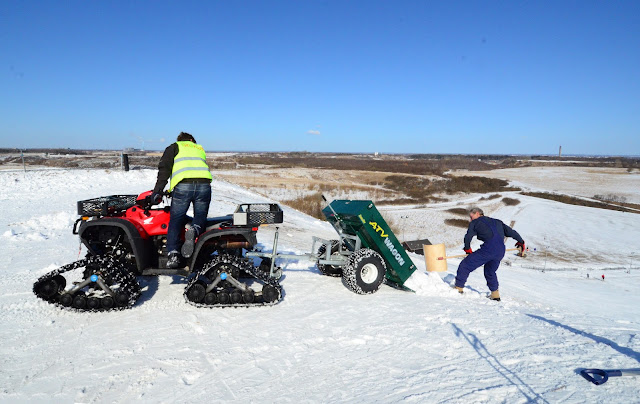 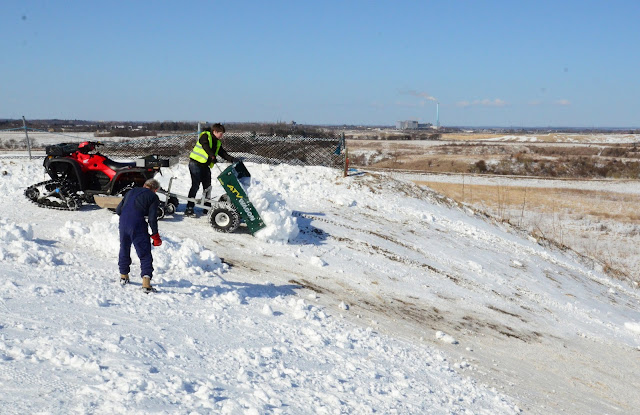 Interestingly, on both sides of the hill there were some possibilities for freeskiing on off-piste routes. On the skier's right, a forest descends to the south towards the parking lot. Had there been more snow, this could have been a great route, as the start is somewhat steep, pretty open, and there's a clear path towards the parking lot. Now, late in the spring I had to walk the first part as it was grass, and ski in a very dense forest where there was still some snow left. Nevertheless, this is an interesting area.

Here's the route from the south side. You will ski through the forest, and end up on the parking lot, lower right in the picture.

To enter, exit at the top of the lifts, and go right and forward until you can go around the last lift pylon. The choose the proper path to descend. Most of the forest is very dense, and full of bushes. Be very careful here. This is the start: 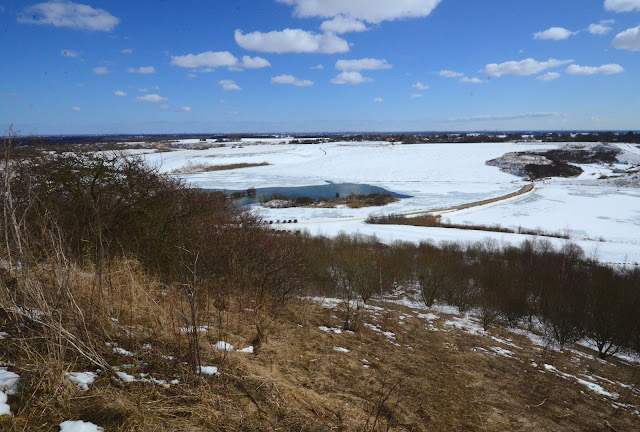 On the skier's left, a open area descends towards the access road heading up to the top. There is only maybe 20 meters of skiing here, but it all seemed excellent, even on my visit there was plenty of snow. Once you reach the access road, ski along it and exit back to the slope by going above the hut that houses the upper end of the beginner's ski lift.

Here's the entrance to the north side off-piste: 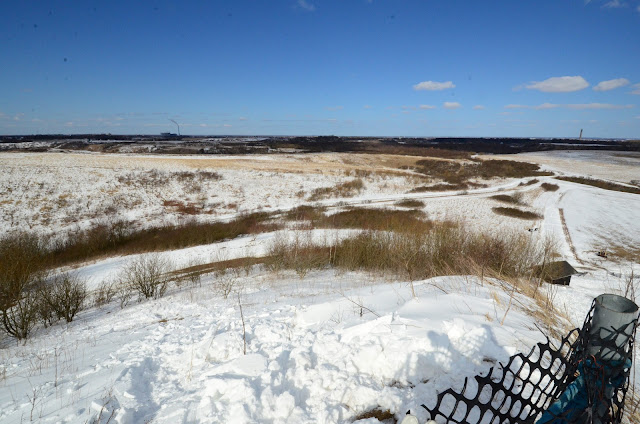 Day ticket costs 100 DKK or about 10 €. Tickets are stamped on your hand, or, if you do not wish to remove your gloves too often, on your cheek. 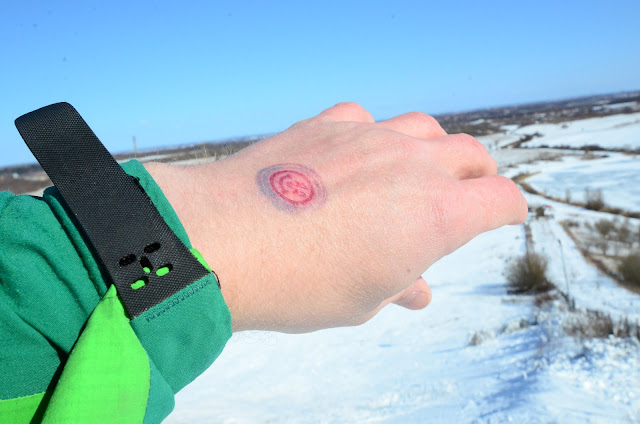 I can recommend the very big sausages and hot dogs from the grill. They were tasty, and cost only 30 DKK (3 €). A day of skiing here, including lunch can there take as little as 15 €. That is almost unparalleled, in the western world at least. 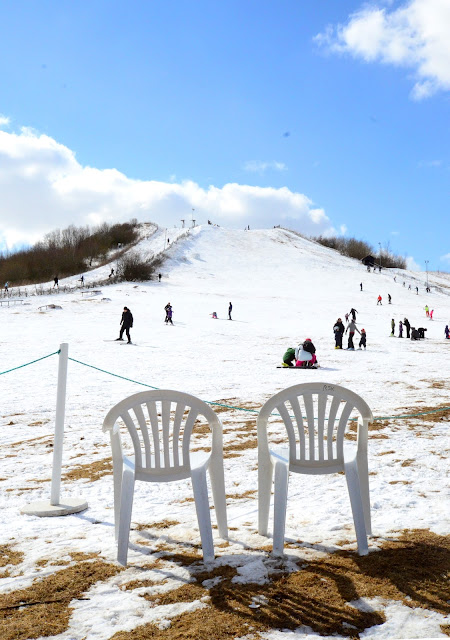 Here's the route to take you from the airport to the ski area.

Incidentally, I originally wanted to stay the whole day here. But then I saw the flight number for the earlier flight, and just had to take it instead. I have been on many fights from and to HEL, the official designation for the Helsinki-Vantaa airport. This flight was AY 666, destination HEL. And I really tried to get a seat on row 13, but unfortunately they were all taken. 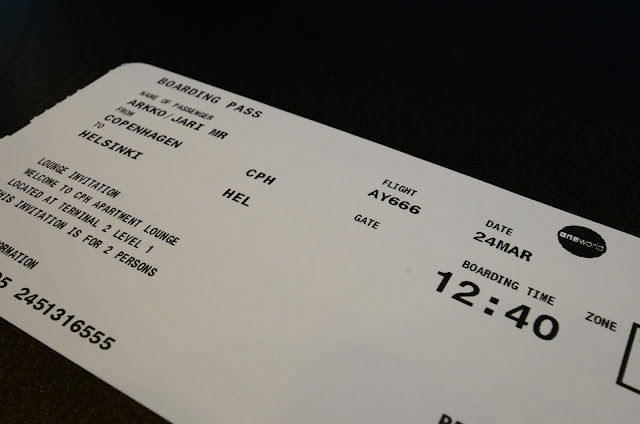 Someone suggested that this route proves the airlines have someone with a sense of humour, but I think it just that we in Finland do not really even notice superstitious beliefs. The thought of removing flight number 666 or row 13 does not even occur to anyone.

From earlier explorations, the flight from SIN to HEL is also interesting. 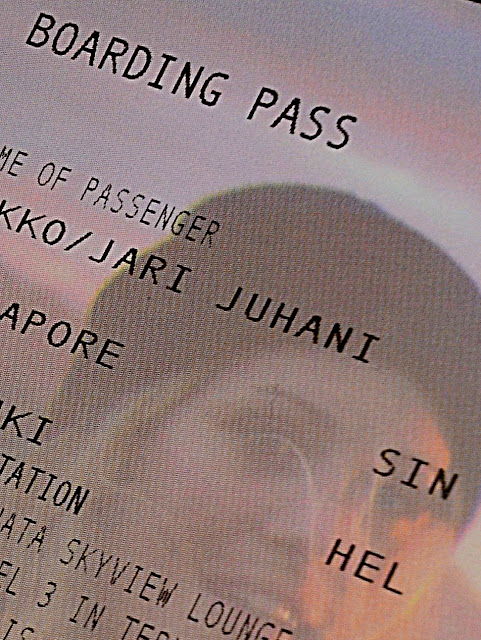