Riders of the Lost Ash 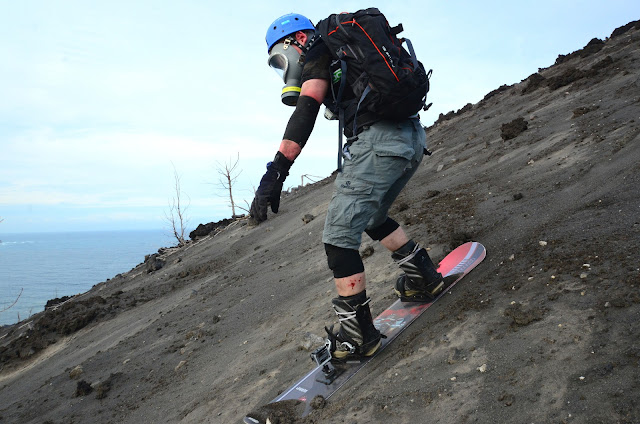 Sunshine. Waves. Jungle. +35C. Weekend alone on a tropical island, with nothing else to do than to listen to the wind and sea. And walk on black sand, or tease the two-meter lizards away from my tent.

Wait. Black sand? Giant lizards? What kind of story is this?

I am on Anak Krakatau ("Son of Krakatau"), a small volcanic island in Indonesia, between Java and Sumatra. A new island that rose above the sea in 1927. It grows steadily in the place of its father, Krakatau which disappeared from the face of earth in an explosion in 1883. That explosion killed 36,000 people in the region, sent tsunamis that were measured as far as the British Channel, and cooled the entire planet for a couple of years.

And I am here to make the first snowboard descent of the volcano. Yes, on a tropical island. And even when the 300-meter peak is, if possible, even hotter than the beach, has never seen snow and never will. But the rumors have told me that it has decent ash slopes... And yes, on snowboard, not skis. It felt more natural to attempt ash/sand on a board than on skis.


Although the board thing could prove tricky. I have only done three hours of snowboarding in my life. This will be my second day of snowboarding. I think I'm ready for the "black slope", however. In style or not, I'm going to try.

Tourists hike regularly to the old crater at an altitude of 140 meters on the east side of the volcano. This is a mere stroll, even with the soft sand and ash on the last parts.

The next leg of the climb is a scramble among large volcanic rocks. You have to be careful to not slip or cut yourself in the sharp rock edges, but otherwise it is easy.

But then the going gets tough. New stones thrown out of the volcano form a thick, loose layer. I'm in danger of causing a rock avalanche on every step. Ordinarily I'd be wary of climbing alone, but now I'm glad that I left my guides to follow my ascent from safe point. I do not want to send stones towards my climbing partners.

But it is still difficult. My first attempt fails, as I can not make progress, every step up brings me down more. The next day we make a second attempt, starting in the darkness at 4:30am. I choose a different, more rocky route. Now I can make progress, and after an almost hour on the upper face I reach the top at sunrise. The crater wall goes up steeply, and then falls vertically into the crater. The entire mountain looks shaky. And what is more, the fumes coming from the ground and now the crater itself are starting to get to me. I have a breathing mask, but it is time to get out, and fast.

Riders of the Lost Ash

I blame the November 2012 eruption. Before this the entire mountain face was sand and ash. Now it is boulders, with some occasional patches of sand and smaller pebbles. Lets just say that the conditions are not all that perfect for boarding.

But I have to make an attempt. At the top the loose gravel and "only" foot-size boulders make it possible to slide down the top section. I make it down for about fifteen meters, then it is time to walk. A little further down, a gravel field makes longer descent possible. I'm doing OK for a moment, but then catch an edge and tumble. Minor scratches. I'm wearing protective clothing, which helps.

And there is a funny thing. You know when snowboarders tend to sit around in snow in the slopes, and getting their bottoms cold? Not going to happen here. I can only sit for a minute in one place until my bottom starts to burn from the heat coming from the mountain's insides.

Next I need to walk again, to cross a flat patch. After that begins the most interesting part, a longer section of sand and ash in a burned-out forest east from the old crater. This part is not that steep, however, so the sliding goes slow.

Even on this sand slope, there are scattered lava bombs everywhere. Impact craters from hot lava fragments thrown out in the November eruption. Big craters, some three meters across, with the splattered piece of now cold lava still sitting in the middle. About.Com states about the risks, "sunburn and unpredictable death by gas or lava bomb". I am glad the mountain is not erupting now. But there have been earthquakes in the last couple of days, so there is a chance that an eruption could begin.


Finally, back to the beach.

The recommended base for visiting Anak Krakatau is Carita, on the western shores of Java. Carita is about four hours from Jakarta, the capital city and the location of the international airport. You will need a guide company to arrange everything. I had a good experience with Iman, the guide from Krakatau Tour at Carita.

The trip to the island is 60 kilometers across the Sunda Strait, and is quite challenging. We ended up waiting for a day on the island for the weather to improve. Even so, the waves in the rainy season's unpredictable weather were higher than our boat. And when the boat goes at speed, it slams into every wave with a kidney-separating force. I do not recommend this trip unless you have the stomach for rough seas.

A little more relaxed option to get to the island are slow boats. These boats take off primarily from the Sumatra side of the Sunda Strait.

However, I very much liked the experience of camping out on the island. There is a ranger station - although empty at the time we were there - and a couple of places for tents. But as the slow boats carry 20-30 people, they will house those people in nearby islands instead, with better facilities.


But the visit does not have to involve camping or climbing. Dozens of tourists visit Anak Krakatau on a weekend day for a day trip, just make the stroll to the old crater. This is an experience itself, and also recommended.

Those lizards? The one we had in the campsite seemed rather tame. They are vegetarians, but this one has probably gotten used to food given by humans.

You might ask why. I could give you the standard climber's answer: because it is there. But really, visiting Krakatau has been a dream on my mind for probably ten years, ever since having started reading about it. By the way, I recommend "Krakatao: The Day the World Exploded", a book by Simon Winchester.

And the snowboarding was merely a recent addition, a way to increase the challenge level. Had there been ash, it could have been epic. As it was, it was a difficult, clumsy slide down. What sliding I was able to do was very slow. But I made it. I hope someone makes a proper top-to-bottom descent after the next "epic ash dump", and gets some nice turns in there!

This article has been dedicated to the "Absurdly Crappy Ski Conditions" -thread at the Epic Ski forum, which inspired this trip.

Kids, do not try this at home or on your neighborhood volcano. It would be just stupid.

Posted by jariarkko at 2:17 PM