Horseback Skiing in the Himalayas 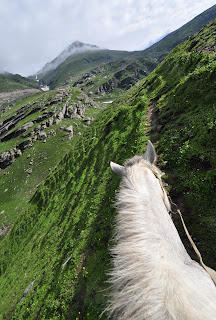 I'm having a Zen moment. I did find snow and was able to ski, and now the soft clouds, green environment, winding road, sitting Buddha, smoke aromas and the local music was having an soothing effect on me.

But this did not come easily. My plan was to go to Rohtang Pass, Himachal Pradesh, India. Never before have I encountered so many obstacles. It started back home, when it turned out to be impossible to find out if skiing was possible. Several sources indicated it might be, but there was no information about the details, no pictures, no phone numbers to call, nothing.

Would there be a ski-lift? No idea. Was climbing involved, and what equipment would be needed? No idea. I did know, however, that the heliski operation had ceased for the summer and that while high-altitude touring was possible, it would have required at least a seven day trip.

Given the lack of information, there was nothing else to do than to show up and see what happens. 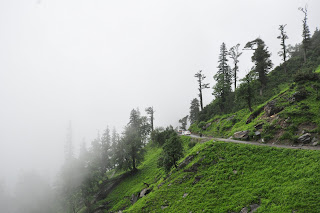 Luckily the concierge at my hotel was able to organize a ride, a driver and a car. A taxi. When I met the driver, however, he said that our ride would take 14 hours from Delhi to Manali. That is before going up the actual mountain. 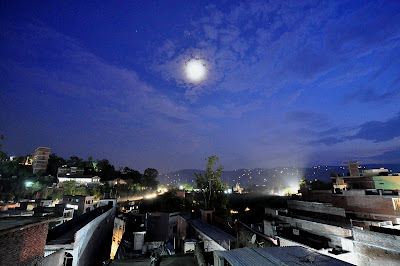 And I had no idea what kind of driving was required even to make that 14 hours. On the first hour of the drive I woke up to a violent crash. Someone had driven to the backside of our car at high speed. Their car was wrecked, half a meter shorter than before. Luckily no major damage to persons, however. A kid in the other car hurt her face a bit and my neck was stiff. Our car was deformed but functional, so we picked up the loose pieces (like our spare tire) and carried on.

This is the kind of an accident that in the US would have sent everyone to the care of their hospitals or lawyers. Here, it seemed like a part of life. I saw many other accidents on the road during the rest of our journey. 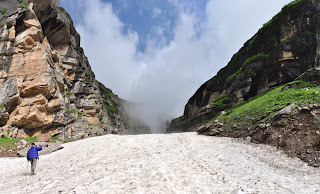 And I'm not normally afraid of anything, but on this trip I was truly scared about the traffic. Our accident was nothing compared to the dangers on the mountainous part of our trip. Narrow, winding roads, speeds close to hundred kilometers an hour amidst slow trucks, and terrifying passes both by us and the oncoming cars. And practically no visibility in the turns. But not to worry, as long as we honk the horn before the turn the oncoming traffic will know we are there... maybe. 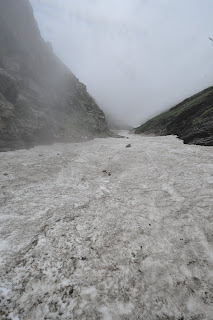 But we did get there. And then had trouble finding suitable accommodation. The first place that we stopped at had the hotel guy proudly demonstrate their rooms for me. Something moved in the bathroom floor. I wanted out.

I should have ditched the guys advice at that point, but he wanted us to go to a better place of the same owner. This hotel was by itself reasonable. But their ability to help me get to where I was going was lacking. It took an hour to discuss what we needed for the next day to get to the mountain. No one seemed to understand English. The type of cars and drivers I needed kept changing. In the morning they put me on this tiny Fiat with a guy who did not really know where he was going.

As we kept going up the road, it started to dawn on me that the Fiat may not be the right vehicle for "highest Jeepable road in the world" that stops few meters short of four kilometers. The mud pits got deeper and deeper, and it was simply not possible to continue any more. We reached a bit over 3300 meters and now had to turn back. No skiing? And even the 4wd drivers were telling us that the road is closed due to rock slides. 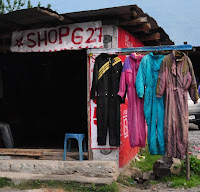 There was nothing to do but to go back. We had one last hope, however, as we had learned from my driver's English-speaking brother that there was another access to the snow. We parked our car at an altitude of 3100 meters and promptly found a solution: a Sherpa and a horse.

No problem. I had never ridden a horse before, so practicing riding on steep, rocky paths between three and four kilometers while carrying ski gear and taking photographs sounded like a fun thing to do. And it was. I have to give it to the horse, however. I was merely a passenger, the horse on the other hand has probably done the trip every day in its life. It set its foot securely, if at times doing it almost at a running speed. I survived. But I did regret leaving my helmet in the car. I was expecting easy skiing, but the helmet would have helped my anxiety about the horse or me falling down. 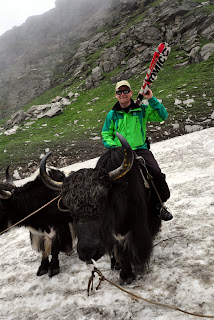 The horse carried me three hundred meters higher, in the middle of a couloir that has retained some snow deep in the shades between the mountains. Fifty other tourists, all from India were experiencing the snow, but I saw no one else trying on skis. I decided that I needed to ski from further up, so we started to climb up the couloir. I had just arrived today at these altitudes, so I was taking it easy to avoid getting too exhausted. We climbed up 100 meters and reached 3500 meters.

I'm regretting stopping at that point, however. I later learned that the gully continued all the way to the Rohtang Pass at 3970 meters, the highest point in the road. It would not have been fully skiable, there were some rocky sections. But it would have been a nice climb for maybe two more hours, and an interesting ski route. As it were, I skied down from 3500 meters. Maybe it was the right decision, however. 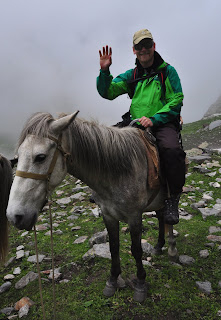 I had a Sherpa with me, but he spoke no English. And I was unable to find out if avalanches and rock falls were a danger here. All the snow in the gully was covered with small rocks. A few meters from where we stopped there was a bigger rock that looked like it had dropped there, not melted from under the snow or brought by the winter avalanches. If you ever visit this place, bring a helmet, crampons, and figure out what the safety situation is. The gully has potential to be a great place to ski, particularly in May/June if the snow covers the entire way. It can also be skied by riding a car up and then skiing down, riding a horse back to the road. Recommended for adventurous skiers.

Skiing down was fun, as we skied first in a cloud and then re-appeared back to sunshine. There were plenty of rocks to avoid and some sand and dirt on top of the snow. I'm guessing my ski repair shop is getting yet more work. Sliding was not perfect given the quality of the snow, so some additional steepness would have been nice.

When I walked back to the tourist area there were opportunities for riding some bigger animals, sliding down with a tire, food, trying on some local clothing, and other fun stuff. The local people are friendly and happy folk. I wish understood their language. 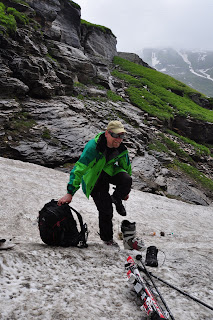 Practical details about the trip? I got 125 meters of vertical in my 1 minute 53 second ski run. I spent 1274 times more time to get here and back (40 hours), which is an even worse ratio than on my infamous trip through Poland.

But of course the value of the trip was not just the skiing. The scenery, the people, hiking up, riding horses, food, and everything else was mind-blowing. I forgot to ask about the price of Goulash soup, but if soup costs a bit over a Euro in a fine-dining restaurant in Delhi, it cannot be very expensive in the Himalayas either. I paid 26 Euros for night for the accommodation at Manali, the main village next to the Rohtang Pass road. And the highest price that I ever paid for a taxi ride: over 300 Euros. But I have to hand it to my driver. He did get me back alive. And he drove for 28 hours within the space of only 40 hours (he slept while I was on the mountain). 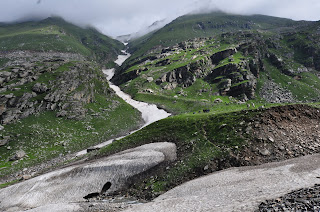 Given a choice, I would have visited this area in the winter time. There are a few small ski areas, but a lot more options for venturing to the mountains in the winter. There is a heliski operation between January and March, for instance. They can take you all the way to 6500 meters, perhaps something to try some day in the future. On the trip I also found out that it might have been possible to fly to this area after all. There's an airport near Kullu. That might have been a better option, if there are flights to Delhi. There are plenty of shops in Manali for ski gear and clothing, but I would recommend bringing your own if you have special requirements. The businesses are tailored towards local people who are here to see snow for the first time, not for experienced western skiers or climbers.

Conclusions? I learned a lot from the Indian way of life on this trip. Practical details sort themselves out, eventually. Learn to love everything that the country offers. Relax. Listen to some local music, smell some aromas, let the Buddha guide you. 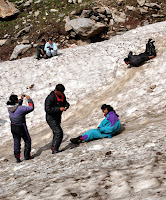 And while in India, drive in a big car. Sit in the middle of the vehicle. Eat only heated food, and only from places that are popular with the locals as well. Figure out the way to use the hole-in-the-floor toilets. Some good advice for traveling here can be found from the book by Madventures (my spiritual leaders in matters of travel).

Posted by jariarkko at 2:58 AM