Half a Stryn of Skiing 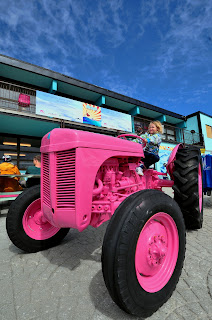 Midsummer weekend, 2011. The good news is that I have a day of skiing in one of the best summer ski places on the northern hemisphere, Stryn, Norway. The bad news is that the glaciers really are melting. And that's affecting my day at Stryn, as the upper ski lift is being rebuilt to accommodate for the changed shape of their glacier.

This means that half of the ski area is out of action, at least unless one spends an hour or two walking up. And I can not do that today, skiing with a kid.

But at least its a great, warm and sunny day. The summer ski areas always advertise themselves with pictures of people skiing in their swimsuits. That's as far from reality as it can be, normally. There's a reason why these places have snow: they are either very cold (high up) or they have always bad weather (it rains a lot). But we are lucky today, swimsuits would almost be enough. On a normal day it would be at least cloudy and cold, if not foggy and rainy.

I like Stryn because of its relaxed attitude, off-piste opportunities, direct access to the slope from the first ski lift (no one hour commutes to the top of mountain, like in the Alps) and the availability of many other interesting sights nearby. But mostly I like Stryn because unlike many other summer ski places, Stryn has steep ski runs. Its wonderful to descend a steep slush face with views of green lakes and waterfalls underneath.

Stryn receives an enormous amount of snow every year, as the winds push moist air from the fjors towards the mountains. The amount of snow varies between 5 and 15 meters annually, and in the summer when the snow depth is only 5 meters they open the ski area! Its typically open from May to July. The snow in Stryn feels natural, spring snow. Not rock hard high-altitude glacier snow.

There's really only one ski slope at Stryn: straight down, a bit to the skier's left from the lift. Be careful about the cat track that switches back and forth, as there can be big drops next to the track. But most people take themselves little further to the skier's left, few hundred meters from the ski lift. For a summer ski run, this is a steep, sustained slope. But the real benefit are the views: you are skiing straight towards a waterfall and the lake. On a warm day late in the season you make a turn here, make the next turn, and flying snow from the previous turn hits you on the back. Nice! 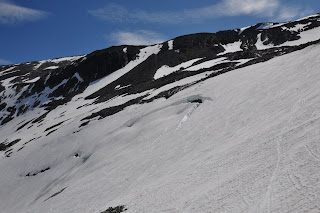 The other off-piste option is to take yourself to the top of the upper ski lift and then go far to the skier's right, staying on top of the ridge. Ski down a steep snowy gully that goes down on the side of the ski area but keeps turning a bit to the right (see the middle of the picture on the left). Once you are down from the steep section, go straight towards to the ski area, but be careful about the crevasses that exist on this area. Do not take this ski run unless you know what you are doing!

There are further off-piste ski options by going far to the skier's left, down towards the road that comes from the valley, hitching a ride back to the ski area. But I have not tried those routes. 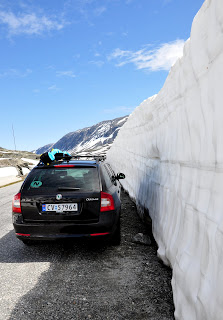 Here are the essential parameters for Stryn: The base of the ski area sits at 1080 meters, and if all lifts are operational, the top sits at 1600 meters. This means over half a kilometer of vertical. Lift tickets cost 330 crowns or about 42 Euros per day for adults. It takes roughly half an hour to reach the area from the valley bottom, and an hour from the town of Stryn.

The road to Stryn has countless switchbacks, and can be tiresome to drive for the inexperienced. The first time I was here twenty years ago the engine of our car shut down on every attempt to shift gears. Not a good vehicle for these roads.

You should also watch for sheep on the road. And nearer the ski area, watch for boarders flying over the road. This year the snow banks next to the road were small, but on our previous visit they were 5-10 meters high. Its a popular but dangerous sport to try to jump over the road at high speed.

We found the Strynsvatn Camping an excellent base to stay at, half way between the town and the ski area. A fully equipped, new cabin for eight costs about 160 Euros per night, smaller cabins or tent and camper van slots are cheaper. The views are spectacular. There are more services in the town of Stryn, but it is not as exciting place to stay at. And its a central place for touring Geiranger, Briksdalsbreen, Galdhöpiggen, Jostedalsbreen National Park Center, or any other nearby attractions. And these sights are definitely recommended -- Norway is full of wonderful places to visit.

Stryn is roughly half-way between two major cities,  Bergen and Trondheim, 300 kilometers from each. The only practical way to reach it is by car. Driving is easy from Scandinavia, elsewhere you'll have to fly in first. We flew to Bergen and flew back home from Trondheim, using the local low-cost carrier, Norwegian Air Shuttle, which turned out to be not so low-cost after we paid for the luggage and ski bag transport. 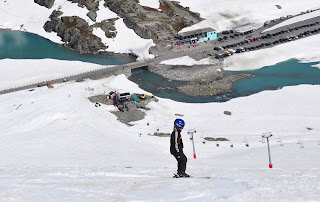 Stryn ski center does not serve soup, so I was unable to determine the Goulash index for them. Sandwiches were reasonably priced for Norway, however. In general, eating in restaurants in Norway is extremely expensive, however. Calculate 25-30 Euros per person even on basic family restaurants. Pretty expensive, particularly when moving around with a family of five. (Norwegians are really rich, they can afford to live in Norway!) 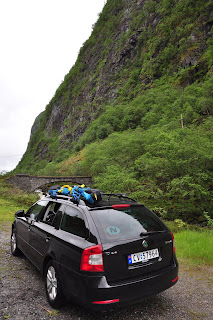 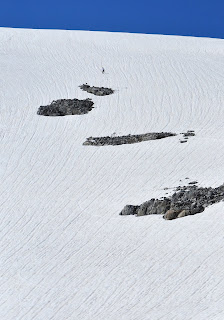 Posted by jariarkko at 3:17 PM