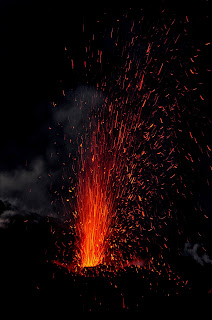 A couple of days ago I was arranging my trip to Quebec, Canada that is coming up in two weeks. I had two options, either use a Finnair flight or an Icelandair flight. The advantage of the Finnair flights was that I would get to use my normal airline, collect points and spend a little bit less time on the trip. The good thing with the Icelandair flight would have been that I would have been able to stay a day or two in Iceland, the tickets were a little bit cheaper and travel schedule more relaxed. My plan was to go check out the summer skiing possibilities on Myrdalsjókull, a glacier that sits on top of the Katla volcano. If you remember Eyjafjallajökull from last year, Katla is next to it but much bigger.

I ended up booking the Finnair flights, mostly because I had to no time for additional skiing.

In yesterday's news they were reporting major flooding in the area, and it is suspected that Katla is erupting.

The flood washed away a bridge and cut a major traffic route. According to Wikipedia, "Helicopter pilots flying over the glacier also reported cracks in the glacier, suggesting a large meltdown of the glacier on the south-eastern rim of the Katla crater".

Although... going there would have enabled me to enjoy two of my hobbies, skiing and volcano-watching... hmm...