Off-Piste Skiing in the Peuramaa Alps

Good skiing is not limited to big mountains. Take Peuramaa as an example. This is a local hill a couple of kilometers from my office. A small hill by any standards, just 55 meters (180 feet) high. But it is a full service ski area: there's a parking lot, ticket sales booth, a couple of ski lifts, and even a bar that serves some excellent Pepsi Max for your after-ski. Or so I'm told, I would of course never go that wild in the after-ski.

Seriously though, they have the playground. And I don't mean the place where you can drop off the kids so that mom and dad can go skiing. The playground is hard to define, its not any particular thing. For me its the part of the ski area that prevents me from getting bored. The part that challenges your skills, makes your muscles ache, or evokes some fear. Sometimes its a sustained, steep descent on a big mountain. Sometimes its spectacular scenery. Most of the time its something about skiing in different conditions. In Peuramaa its their snowboard terrain park that even the skiers can try, their surprising amount of off-piste options for such a small hill, the rocks, and the trees. 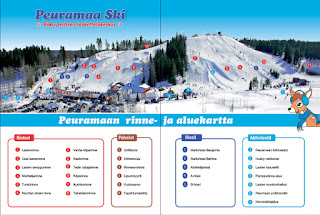 So where where should you go to find the off-piste in Peuramaa? One easy-to-access place is on the far right in the map, in the small forest area between the "aurinkorinne" and the "kilparinne". This area has some rocks, drops and other terrain forms. Another interesting place is on the far left in the map, near the "magic carpet" children's lift. Right next to the top of the lift there are some trees and 5-10 meter high cliffs that are at times partially skiable, depending on snow cover. Be careful here though, there is potential for a major fall down the cliffs.

The ski runs themselves are mostly boring, small runs with two exceptions. The snowboard terrain park is in the "turistirinne" and at least I was entertained by trying to learn to ski the boxes. There are plenty of jumps, rails, and boxes, and Peuramaa is quite popular with the snowboarders.

The "kilparinne" is the steepest and fastest run. Even if this is a very small hill, its a fast enough run that I was unable to ski it straight down without making turns or flying into air on the way. Interestingly, on my 48-hour challenge tour, I skied in a ski area in New Hampshire, and skiing it down without turns was no problem. That area is missing a playground.