Last week I mentioned the 48 hour challenge: to ski in as many states as possible during 48 hours. I'm now back from a 1200 km tour that covered five states: Sundown in Connecticut, Mad River Glen in Vermont, Bretton Woods in New Hampshire, Sunday River in Maine, and Nashoba Valley in Massachusetts. I did spend a lot of time in the car, but also found some truly incredible skiing along the way. I will write about this in more detail later, but the main thing I want to say now is: Mad River Glen: Just wow. Wow. I also want to mention Nashoba Valley: an excellent place to practice crevasse rescue technique, and only half an hour from Boston. Recommended. 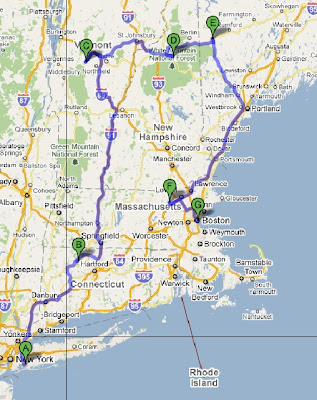 Here is my route in more detail. It does sound like long way to drive, and it was tiresome, particularly while being jetlagged. But what made it easy was that it was broken up in shorter drives, in the morning, between the day's skiing and getting to a night ski area, and then from the night ski area to the next night's hotel. And I would have had to drive 350 km anyway just to get to my meeting.

Note how different this route is from what I had originally. My friend pointed me to Nashoba (thanks Ralph!), and picking a local hill around Boston as opposed to a far away ski area enabled me to add another state.

I found all my hotels from the roadside when I needed them, staying first somewhere along the I-91 for the first night, and then in Bethel, Maine for the second night. In Bethel I can recommend the Chapman Inn for its excellent breakfast and friendly service, not to mention the open Wi-Fi.

The weather on the first night was cold, winter-like. On the first day we had spring-like conditions and a bit of fog in the upper areas at Mad River Glen. On the second day it was raining. Yes, water, even the top of the mountains. And pretty heavily. Luckily this did not prevent skiing, though a few places closed a bit earlier than expected. At one point I considering a detour to ski somewhere in Quebec as well, but if I had done that I would have arrived at Nashoba Valley too late, as they closed earlier than planned.

What about the crevasses? The melting snow and ice had created cracks in the ice at Nashoba. But how large they were... the first and and last picture on this blog entry is taken from the same crevasse. What a difference perspective makes on a 10mm lens! For those that have not heard of Nashoba, its a local hill outside Boston, maybe 100 feet high.