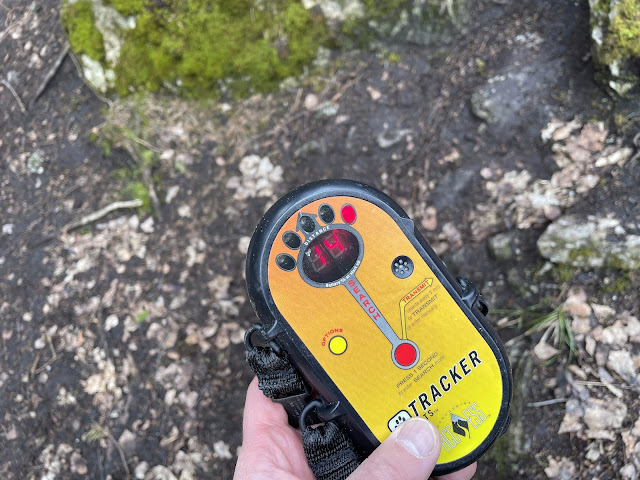 A while ago, Bo Lenander asked a question in the Swedish Caver's Association if avalanche transceivers could be used as cave location beacons. As I have such transceivers, I started looking into this...

Radios have been used in caving and cave research for both communication and determining locations. Communication is needed for safety and other reasons. For instance, emergency situations, exploration progress and estimated return times to be communicated, etc.

Pinpointing locations is also a safety matter. But accurate measurement of locations is also useful for constructing cave maps. Underground map construction relies on sequences of measurements where small errors may accumulate over long distances, and being able to pinpoint a particular place in the cave allows parts of the map to be fixed with respect to their ground location and GPS.

Cave radios typically operate in low frequency areas, as higher frequencies are more easily absorbed by rock. For instance, the cave radios reported in [Jones] operate at 88 Khz and 10W, and System Nicola Mk2 radios [Naylor] at 86.95 Khz (also 455 Khz) and 3W. The devices fall in the category of short range communication [ETSI 300 330], but the radios can pass through even hundreds of meters of rock.

Avalanche transceivers are emergency devices operating at the 457 Khz frequency at 0.1W [ETSI 300 718] [Hereford]. The frequency corresponds to 656 meter wave length, and space 456.9-457.1 has been allocated for emergency location devices in [ERC 70-03]. A transmitting device sends a signal once per second, with the signal lasting at least 70ms and break between signals being at least 400ms.

Contrary to cave radios, avalanche transceivers are consumer devices, are mass manufactured, and come with protective enclosures needed to protect them for water and humidity. These devices appear to have a useful range in open air somewhere between 50 and 100 meters. Given that the devices operate with a much longer wavelength than their range and they use small antennas, their operation is largely in the near field and based on magnetic fields.

The basic avalanche rescue process involves a finding the strongest signal strength on the terrain plane, and then using metal probes for the final and most accurate pinpointing of a buried victim. Older devices simply provide an audio signal, but newer devices may provide some additional distance or direction assistance to help the transceiver search.

The question posed in this article is: Can avalanche transceivers be used for communication to and from caves, or localization functions? Yes or no? And if yes, at what limitations?

It has been difficult to find articles about the use of avalanche transceivers in caves, even though there are some articles.

Frank Reid tested unmodified and modified avalanche beacons in 1988 [Reid]. At this time, the avalanche beacons used an earlier frequency, 2275 Khz instead of the current 457 Khz. Reid found that free space range in those beacons was in practice around 30 meters, but with different antenna arrangements this could be made up to 100 meters. Tests in Buckner cave were able to find a transmitter 17 meters underground.

Lou Dawson reported that in the history of making the first avalanche beacons in the 1960s, some of them were actually used for sewer and cave passage location tracking by the city of Lockport [Dawson].

Atanas Rusev recently reported "how he has used them for finding new entrances into large cave systems, and to identify dig locations for joining two caves", but unfortunately we have been unable to find a copy of the article [Rusev].

Absorption of electromagnetic transmissions in materials is of course in general well understood, see, e.g., [ITU] for a good summary of the relevant physics and equations. The equations are, of course, highly dependent on the nature of the materials, e.g., their permittivity and conductivity.

Unfortunately, while there are a lot of sources listing parameters related to absorption in the literature,  most of them do so only for construction materials [NIST] [Ofcom] [ITU] [Agilent] [RFCafe] [Achammer], not natural materials like different types of rock. Most literature also focuses on shorter wave lengths that are used for common communication (GSM, LTE, etc.) William Pullen's report from 1953 provides some information, such as, "attenuation measurements made with transmission lines antennas buried in soil indicated 7.5 db at 350 Khz to 11.7 db in 600 Khz" [Pullen], but it isn't clear if these numbers are useful for our case.

A man-made tunnel in granite bedrock in Kauniainen was used for an initial test. In the very first test we used a 6 meters wide tunnel that goes in a circle, horizontally, around an area of rock. The rock area in the center of the circle is roughly 35 meters in diameter. A transceiver in transmitting mode was placed on the rock wall in one part of the circle, and then we attempted to measure the signal with a transceiver in reception mode as we passed through the circle alongside the center wall. See Figure 1 below. 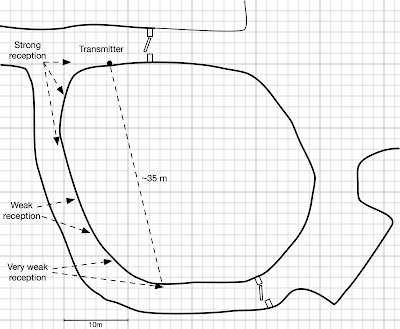 Measurements with the devices are difficult, as no absolute reception level is indicated, exact accuracy of a given device being unknown, and the method at which the signal is presented in the software-driven user interface is also unknown. Nevertheless, the presence of a signal can be detected, and some indication of the strength and direction of the signal is given in the user interface. False positive signal reception is possible but in the author's experience relatively rare and random.

The result from the first experiment in the tunnels is that strong signal was received in areas close to the transmitter (< 15m), moderate strength was seen beyond that but very weak/spurious signal was received behind the center rock. But it was still received. Unfortunately, not much can be determined from this experiment for any of the measured distances. This is because (a) false positive signals can not be entirely ruled out and most importantly, (b) wave guide propagation along the tunnels and around corners cannot be ruled out.

The second experiment in the tunnels provided more information. This experiment was performed in the entrance tunnel, a tunnel that descends gradually while the ground above rises. One test was made 25 meters from the tunnel entrance, and another 55 meters from the tunnel entrance. See Figure 2 below. Tunnel height was 5 meters. Distances and gradients were measured using a DistoX laser and digital inclinometer device [DistoX].  Rock depths have been calculated based on this input and are approximate.

The result is that a moderate/weak signal was clearly detected at the 25 meter location, above ground and with approximately 8.4 meters of rock in between to the transmitter. This signal was confined to about a 10-meter wide circle in the ground and was not present elsewhere. At the 55 meter location (12.4 meters of rock and altogether 17.4 meters away) a very weak signal was detected. Again, it cannot be shown that this was not a false positive signal, but while the signal was not continuously detectable, it was only detectable in a given area, so the current hypothesis is that it was an actual reception of the transmission from underground.

We travelled to Finland's largest karst cave, Torhola in Lohja [Torhola]. This cave spans horizontally 30 meters and vertically 11 meters, but has over 100 meters of cave passage in a complex multi-level structure. The bottom parts of the cave are far away from the entrance, both in in vertical and horizontal direction. Yet they are relatively close to surface, as the cave begins from the top of a hill, and descends downhill towards a lake.

On a previous visit, we had looked at a small side passage at the bottom part of the cave. This passage might be at near the surface. On that visit, hitting rocks with rocks could be heard on the surface, but pinpointing the location where the sound was coming from was difficult.

On the experiment visit, we placed a transmitter beacon at the entrance of this side passage (the passage itself was flooded at the time). See picture below. 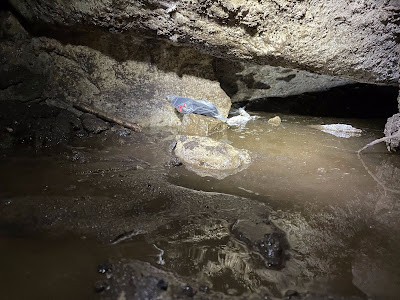 Back on the surface, a search was made to find the lowest display reading (i.e., nearest to the transmitter) at the xy-plane. This search was quite easy, as the indicated strength/distance numbers changed quickly and consistently from all directions towards the minimum. See the picture: 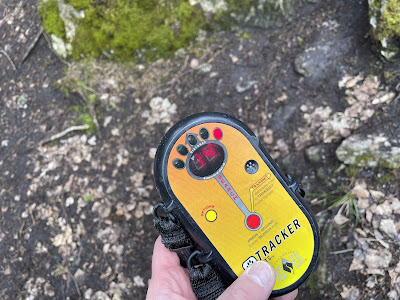 The best location for signal reception was roughly in the middle of this picture, in the ground few tens of centimetres from the bottom of the rock step: 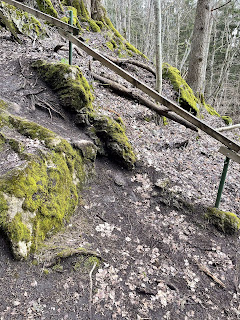 The lowest readings, in the range of 11-17 correspond to being closer than 2 meters, when I've used the device for measuring in free space.

It clearly is not possible to use avalanche transceivers for long-range communication, given the limited power and used frequency. In fact, without modification these devices would not be usable for any communication, as they have no means to carry any user-settable signal (although this may be changing with supplementary vitals data link [W-Link]).

However, perhaps surprisingly they do appear to be usable as localisation device for caves at small depths (< 15m). The author has experimented with this in Finnish caves that are typically small and may never exceed that limit.

Further experiments would be useful. We did not test the effect of antenna orientation, for instance. There seems to be also a big difference between different beacon products, and the ability of their user interface to provide information also differs.

Experiments in larger caves would also be very useful. For instance, the Swedish Lummelunda cave is relatively close to the surface, despite having several kilometers of tunnels. Lummelunda's depth (~20m) may exceed the performance of the avalanche beacons, however, even if the environment may be easier with less concrete, electrical wiring, and human settlements than in the tunnel in our experiment.

Further work would be useful to calculate the theoretical limits of 457 Khz communication through rock. Measurements relating to different rock types would also be useful.

Finally, it is still unclear if the results are relevant. Clearly, purpose-built cave radios and and localization equipment is far superior. However, it appears that in very limited cases readily available consumer devices may also be used. The author was able to pinpoint a location of a recently discovered tunnel part in the Torhola cave using the avalanche transceivers.

These experiments were inspired by Bo Lenander's questions [Lenander] -- thank you. Thanks to the city of Kauniainen and Nina and Markku for access to the tunnels for my measurements, for Ralf, Per, Tor, and Jarmo accompanying me on the first Torhola cave tour, for Helene and Touko for accompanying me on the second tour, and Jarmo and Tero for discussions in this problem space.

This article has also been published at TGR. Read more urban exploration stories from theurbanexplorer.net, and other underground stories from planetcaver.net. Read the full Planetskier series at planetskier.net, or all blog articles from Blogsspot or TGR. Photos and text (c) 2021 by Jari Arkko. All rights reserved.

Posted by jariarkko at 8:10 AM