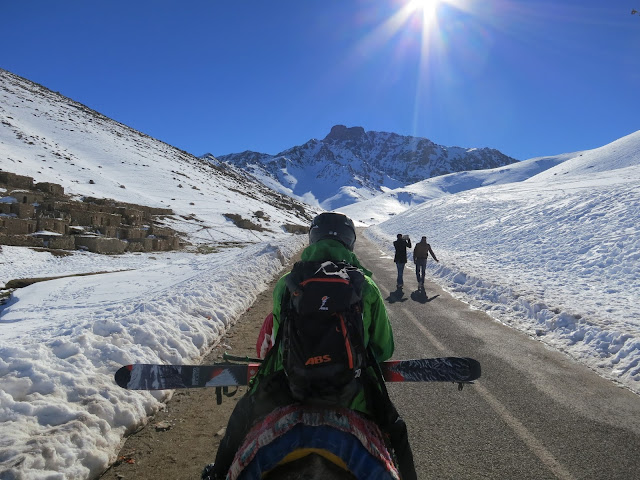 Avalanche pack, check. Skis, check. Mule, check. I am sitting on a mule, on my way to the ski slopes in Oukaïmeden in the Atlas mountains of Morocco.

We are here, because Europe had a bad snow year. And I have to say, there is too much skiing in Africa. I was hoping that after Oukaïmeden, Lesotho, and South Africa, I'd be able to cross of the continent as fully skied. But no. There is another ski area in the far-away other end of Morocco, there are two ski areas in Algeria, there is snow on Kilimanjaro, and there is dune skiing in Namibia. Sigh, plenty to cover still.

Oukaïmeden is about two hours away from the city of Marrakesh and easily accessible. It is a busy snow town with tons of tourists and cars on the road. But most of the tourists have come for a day trip to experience the snow, a rarity for the locals. We only saw foreign tourists once. That is a loss, coming here was an amazing experience for us.

The village is fairly basic, with our hotel, the Chez Juju, being a rare exception in providing western-class accommodation. Most other buildings are bare stone huts. The rooms in Chez Juju are basic, but there's wireless that works if you ask the bartender to reset the router :-) And the food is magnifique! The French kitchen delivers amazing dinners, yet in local style. Much recommended.

But lets get back to the main topic: skiing. The Atlas mountains are some serious mountains, ranging all the way to the 4,167 meter Toubkal, visible from the ski area. We skied nearby, in the ski area's backcountry, offering easily accessible untouched snow. We run into a guy at the parking lot who offered to guide us, so for 20 $ we got a guide for the day. The exploration was still a bit unnerving, given that there were clearly some places where avalanches were a possibility. We skied one at a time and passed these points quickly. Exploring the highest peaks far beyond Oukaïmeden would be a far bigger effort, and will likely require you to bring your own guides and be completely self-sufficient.

The most interesting terrain was to the skier's right from the main lift. A set of couloirs and valleys visible from the lift offers a lot of skiable snow. Further to the right a steep couloir leads onto untouched snow fields. It can only be accessed by traversing steep to the right from from the very top of the lift.

Another interesting area is the ridge to the skier's left. This area leads back to the village, and the remains of ski lifts and structures show that it used to belong to the official slopes.

But even the official slopes under the current main lift are decent: 600 meters of difficult, steep, black run straight down.

But the most wonderful thing for me were the views. We were skiing on white snow, while the red mountains and hills falling below us were all red, with traditional Berberian villages often visible under us.

Oh, and why the mules? The village is next to the beginner lifts, but the main lift is about 2 kilometres away. The most convenient way to reach that lift was by mule. And I wanted to get a ride a on a camel, but unfortunately the camels were only available on lower altitudes. 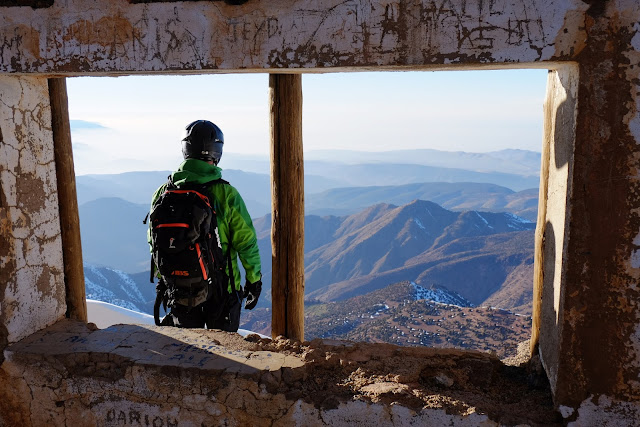 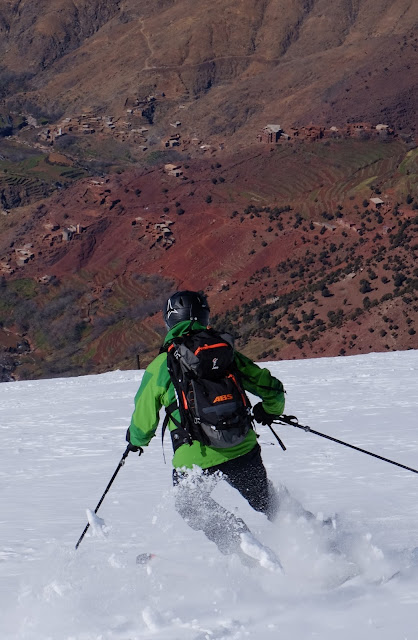 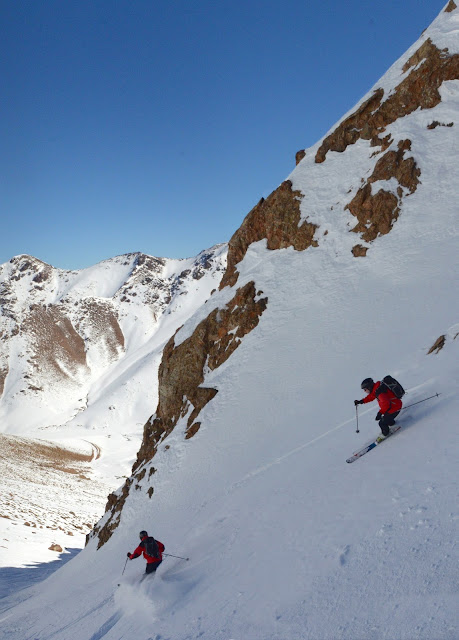 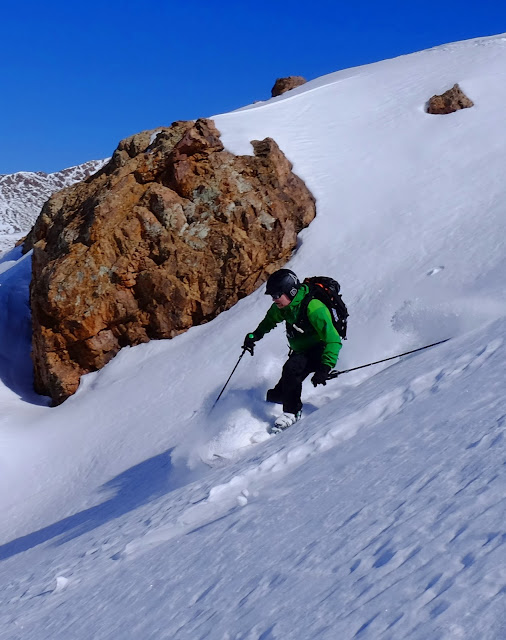 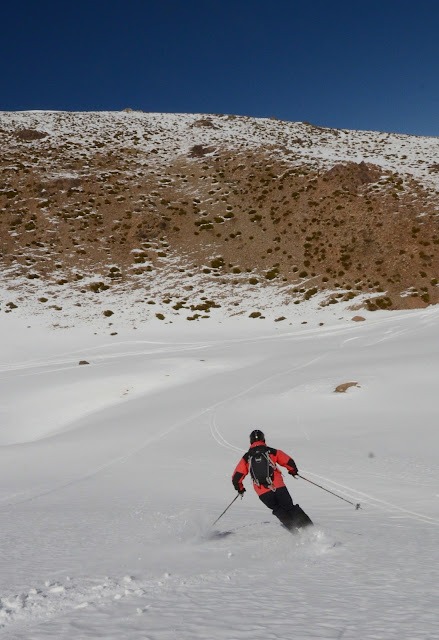 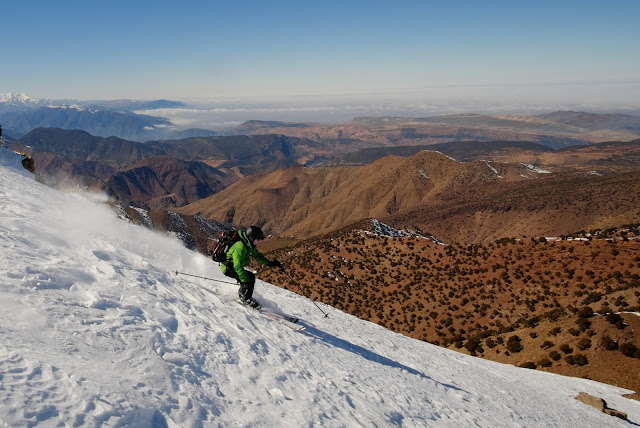 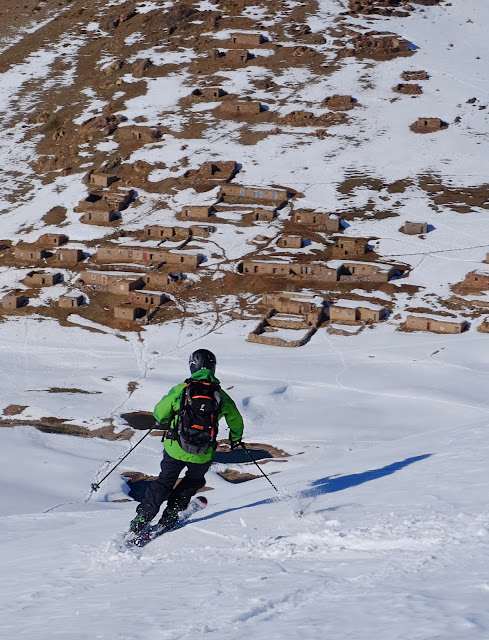 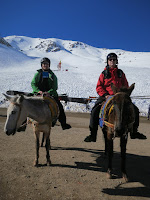 Photos and videos (c) 2015 by Jari Arkko and Jarmo Ruuth. This blog is also available at Teton Gravity Research. Tämä blogi löytyy myös suomeksi. There's also a longer video about this trip from Jarmo.
Posted by jariarkko at 1:57 PM