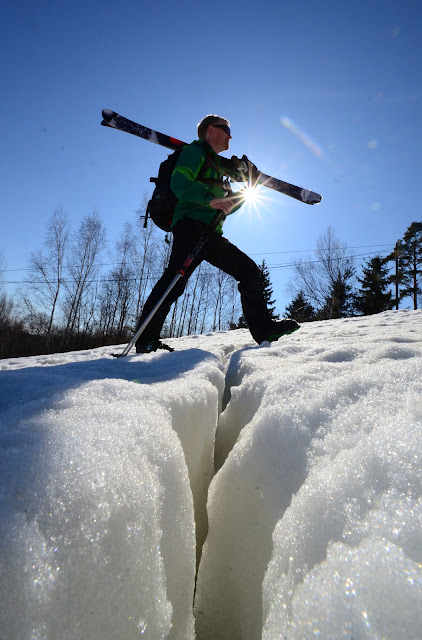 It is mid April and the sun is shining. Is there still some snow left somewhere? There is, at Åland! The Åland islands between Sweden and Finland are known for their sunny summers and flat landscape. I took a boat there to investigate if there'd be any skiing.
Surprisingly, during the winters there is snow. And a ski area: Germundö Alpin is the local ski club hill, with one lift and two runs. It is even smaller than my home ski hill, but a fun place to ski at. And I like these community-run ski areas! They are next door to the people who ski there, no need for wasting time on travel (like I always do). You can ski couple of hours on a school evening. Most of the skiers are kids and thoroughly enjoying their experience, despite the hills being small.

At Germundö, an anchor lift takes the skiers up the hill. You can ski down either straight on the main, relatively steep slope on the left, or take the swirly and less steep right side. On the right side run there are some areas for potential off-piste skiing. But at this time of the year there isn't enough snow left for that. 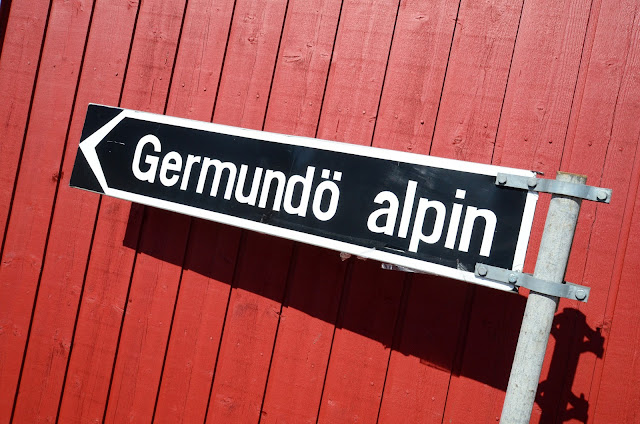 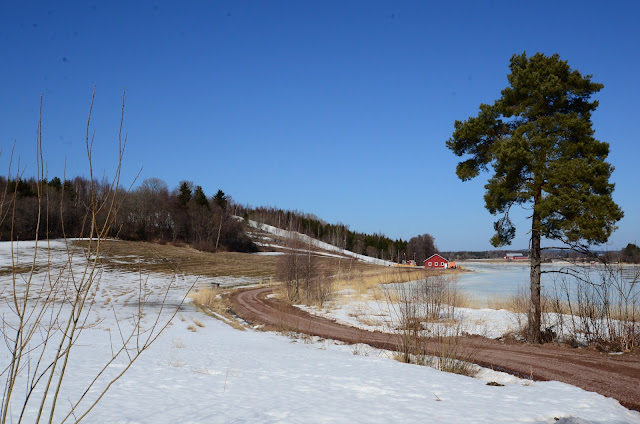 The ski area sits next to a lake. As I admired the views, alone and in silence, I could hear sheep make noise on the other side of the lake. Definitely a rural area. 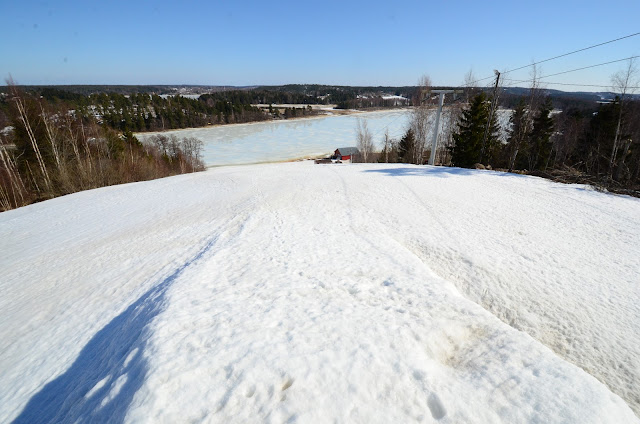 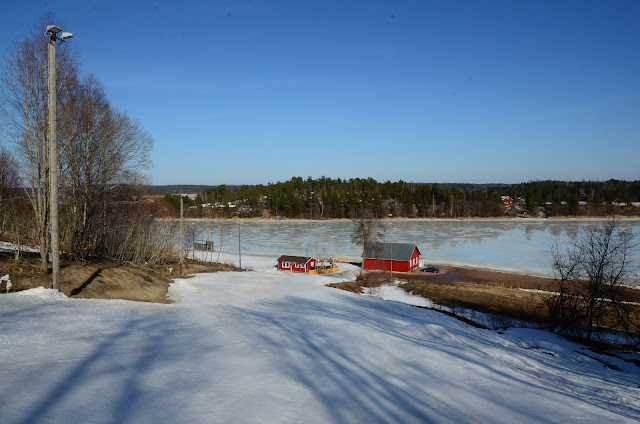 At bottom there is a large warehouse and a tiny cafe. I read from somewhere that they even have gear rentals. I was unable to check out the lifts or cafes, however, as the are had closed for the season a couple of weeks ago. I kept hiking up in soft snow, carrying my gear, until I got tired. The skiing was fun. I always like skiing in soft snow. Even if this time the snow was soft for my feet, but on skis it was still somewhat firm. For this late in the winter this is exceptional. I'm sure there will be snow far into May, at least.
But the snow had been melting a bit, enough to create a few dangerous crevasses. 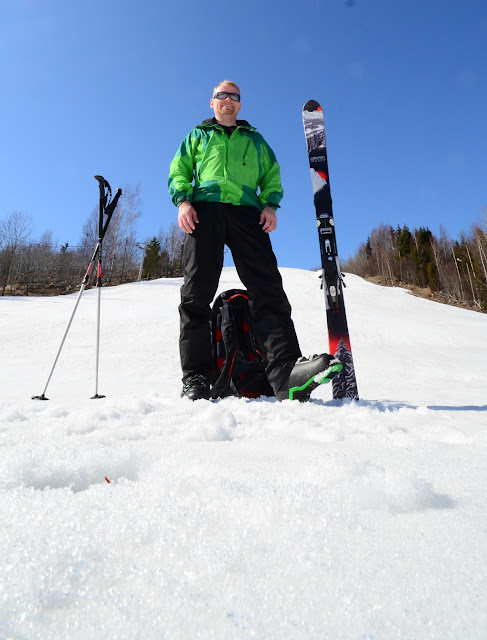 Freeskiing for the Cannibals

Since I had come all the way from the mainland, I did not want to stay only at the ski area. On my way to the area I had been on the lookout for other hills. On the return trip I stopped at a hill near Jettböle. A rocky hill with some snow left. As I approached the hill, I found a parking place with a sign explaining the historic significance of the site. Five thousand years ago, the early inhabitants of Åland lived in a village here. Archeological excavations have uncovered some aspects of the life from those early days, and it turns out that the inhabitants practised cannibalism. 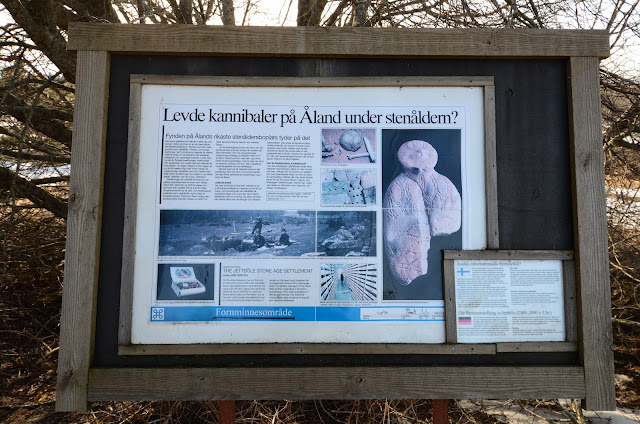 There is still a village in Jettböle. I do not think they practice cannibalism any more. Although the people that walked by did look at me in a weird way. I've been used to this when I carry my skis in the odd places, like on the streets of Hong Kong. Maybe it is the same thing here at Jettböle. Or maybe they were hungry? 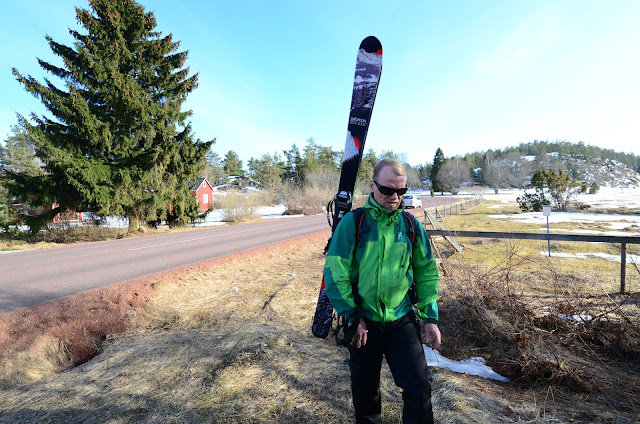 In the historic times the sea level was higher, and the beach was on the field. Now I walked through the field, carrying my skis. I climbed and skied the hill. But it was too steep with too little snow left. Not a good experience for me, and a very bad experience for my skis. But I got down safely. With more snow, this area would be a more interesting place to ski. Maybe with lots of snow even the open cliff area would be skiable. But not in April. 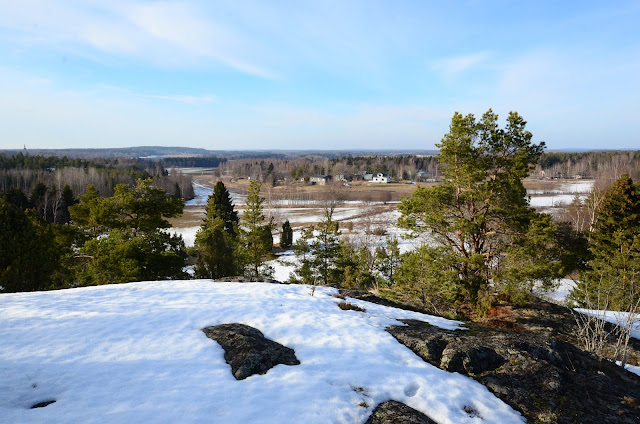 Germundö has about 40 meters of vertical (120 feet). Here is some additional information about the ski area on the tourist information center's pages. The area is at the Lavovägen, the route from Marienhamn can be found from this link. And the ski club's Facebook pages are here.
Jettböle map can be found here.
The entire Åland is pretty quiet outside the main tourist season. Particularly on Sundays. The one and only restaurant open in the whole city on Sunday was Kino, a small pizzeria. It is located in the same building as the Kino nightclub, the most popular club in the city. But it is not open on Sundays, either. And the pizzeria closed its doors at 9 pm.
But I can definitely recommend Hotel Savoy. I did not spend the night in Åland this time, as I arrived in the afternoon from Turku by boat and left at midnight towards Helsinki, again on a boat. But after all the climbing I felt like a shower would be needed. For a couple of Euros I was able to book the sauna in the hotel. There is also a bar in the hotel lobby, open until midnight, and an excellent, free wireless LAN. Recommended! 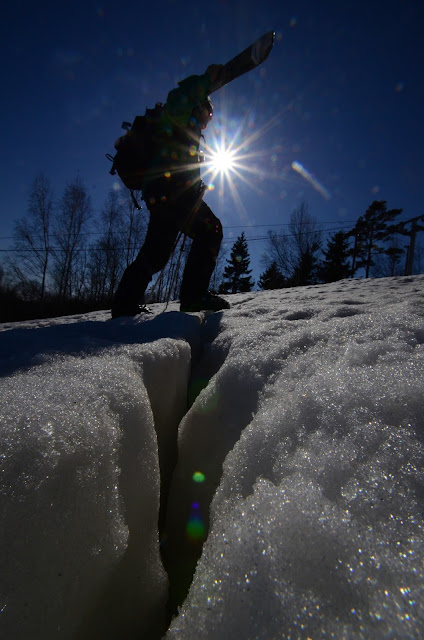 Oh, and Hong Kong: the locals do not seem to know that their city has the eight wonder of the world: an infinitely long ski run.
Videos and pictures (c) 2013 Jari Arkko. The finnish language version of the blog is here.
Posted by jariarkko at 12:44 PM