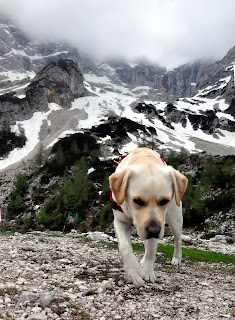 Noon, Saturday in the Kamnik-Savinja Alps of Slovenia. I am at the altitude of 1800 meters, above the Češka Koča hut and in the shadow of the highest mountain in the region, Grintovec.

Despite having dragged my skis through four countries and airports, I had already lost hope of finding any skiing on this trip. But to my surprise I now had snow under my skis. The thanks for this goes to my newly found Slovenian friends: Ana, Matjaž, Urban, and my old friend Jan.

And last but not least, Lana, the climbing dog. Lana has lead the way through the forest paths, rock walls and steep snow faces and brought us to this point. 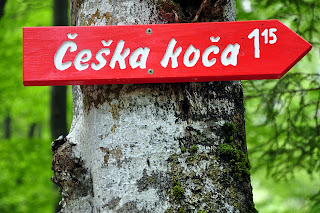 And what a nice place this is. Not just this mountain, but the entire small country of Slovenia is beautiful. No matter where you are, the mountains are visible. And for the most part, the mountains are unspoiled, covered by thick forests and without scars left by civilization.

There are also pretty fields, castles and cities. I had not visited Slovenia before, and I was also surprised about the state of their their technology. Just one example: its the only country with IPv6 available in all mobile networks. 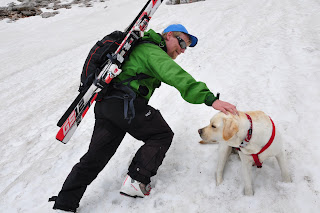 But getting here seemed to involve an endless number of roadblocks. First, my business took me to a few different countries on this same trip before Slovenia, which meant carrying a lot of equipment around and using luggage storage services while was in my meetings.

And unlike with my usual airline, the airlines on this trip all charged extra for the ski bag, costing all together almost two hundred Euros extra.

And then it turned out that the ski areas that I was planning to visit were closing just a few days before my trip. And finally, when we came up with the backup plan of climbing up on our own, the weather forecast center told us to stay away from the mountains. 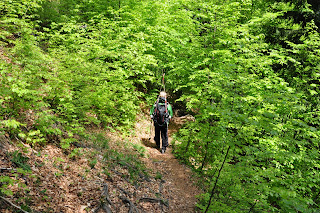 But we decided to risk it anyway. We could always turn back if the weather become a real problem. And that was a good decision. With the exception of a three minute shower, we whole day was sunny. We parked our car at the end of a small road and started the climb through a thick forest at an altitude of 1000 meters. This was an easy walk along a well-marked path. A bit later the path reached a more rocky area, involving a few sections with ladders or safety wire handrails. (These posed a small challenge for Lana, as the young dog needed more climbing experience.) 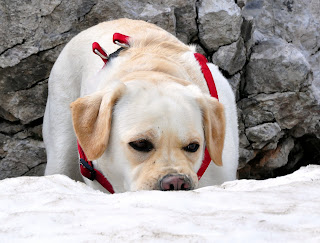 The Češka Koča hut acted as our base of operations five hundred meters higher. A week ago, the snow reached the areas around the hut, but now we had to walk a bit further.

With Lana in the lead, we climbed through scree slopes, rock outcrops, and finally, a steep gully of soft snow. (By the way, it seemed far too easy to climb with four legs.) At an altitude of 1800 meters we reached a plateau. It made no sense to continue, as there was not really any snow in the rock faces above. 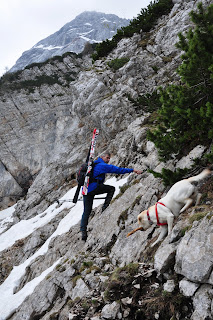 Skiing down the steep gully was fun, as the snow was just soft enough to get a good grip but not to create a wave of wet snow ahead of me. Further down I realized that I had to make slalom turns around the small rocks that lay on top of the quickly melting snow cover. It was not a complete success; I'm guessing that the guys at my ski maintenance shop will give me yet another lecture.

Even further down I found another gully that led past the hut, but the snow cover narrowed down so that I had to cross a few sections without any snow; more trouble for my skis. I stepped carefully over the stones and continued skiing. I finally arrived at the end of the snow and walked back to the hut. 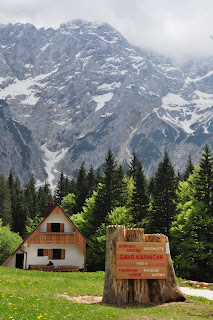 As we walked down and started to leave, my friends had another surprise: we had an opportunity to meet Davo Karničar, the Slovenian climber and extreme skier. Davo lives near the start of the trail towards the Češka Koča hut, and his father actually owns the hut.

Davo's name is not too familiar in the western world, but this man might well be the greatest extreme skier alive today. His achievements include being the first skier to ski down from the summit of Everest and the first to ski down from the seven summits. He has also skied from the Eiger and Matterhorn, and made countless other descents. An amazing man! 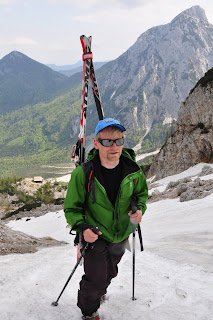 The essential parameters for skiing at the hut are as follows. The hut is in Jezersko, just 30 kilometers from the Ljubljana airport. The hut is at 1542 meters in the slopes of Grintovec (2558 meters). I got 300 meters of vertical on my ski down the slopes above the hut; in the winter far bigger parts of the mountain are skiable.

The recommended climbing time to the hut is 1 hour 15 minutes, and that held pretty well even with large amount of equipment we were carrying (though Urban tooks turns to help carry the skis - thank you!). It took an additional hour to climb to the plateau, and five minutes to ski down.
There are also commercial ski areas in Slovenia. I had originally planned to ski in Sella Nevea - Bovec, a ski area that links Italy (Sella Nevea) and Slovenia (Bovec). They were still open on May 8th, a week before my trip. Sella Nevea would be excellent addition to any trip to the nearby Venice, by the way.

As I am finishing this blog entry, its already next week -- my first week this season that I am not skiing somewhere.

I did travel to Berlin and I would have tried their infinitely long indoor ski slope, but unfortunately it was not open the day that I was there. It certainly feels like summer is taking over.

Oh well, at least I booked a vacation in Norway for next month. Hopefully there will be some skiing in Stryn. With Slovenia being 19th country or state this season, Norway could be the 20th.
Photo Credits (c) 2011 by Jari Arkko, Urban Kunc, and Matjaz Stepancic
Posted by jariarkko at 2:54 PM