Earlier this week I visited the caver's camp in Lummelunda in Gotland. What a wonderful event, happy to be able to go there again! One of things I did was to see if I could build a 3D model of the cave using LiDAR in the newest iPhones. I was able to start the project at least, here are some early results of the 450 meters or so that I modelled.

This is very, very early and unsatisfactory material in many ways. For starters, I covered only a part of the cave. And this tech is still very much at the bleeding edge. The most serious problem is that the app I am using kept crashing when processing texture data in big scans, and therefore only half of texture data of the model (surface photographic material) survived. In addition, the sensor had trouble registering water as a surface, and big parts of the cave are covered by water. Then there are countless artefacts and mistakes, missing surfaces, joins are not exact, sometimes a scan of a part ends up in a fake wall even there isn't one, complex parts are messy, etc.

Still, pretty interesting, and in many parts there's an amazing level of detail. I particularly love the ability to see the rock forms on the outside skin of the model. For me, this reveals more about the cave than I usually am able to see on the site itself.

I'm very happy that I was able to experiment with this!

Your browser may be able to rotate a model on your own screen, at least recent versions of Safari and Chrome should be able to do it. Try it for fun!

The non-textured version of the model can be also downloaded, if you want to play with yourself. The GLB version is here, Blender version here, and STL here.

The opening picture above is a detail of the model around the four-way intersection between the clay tunnel from the Sandbanken (lower left), crawling tunnel (upper left), tunnel to Sump 1 (right), and tunnel to Hästryggen (lower right). Note the Finska Gruvan, a tiny, newly found hole at the top of the picture. I did not go all the way in, as it typically has bad air. Also note the joins that you can see in the four-way intersection. For practical and software limit purposes the model is built of 20-50 meter parts which are then joined in postprocessing using Blender.

The below picture is what the insides of the model look like when the texture happens to be in place. Note that this is not a photo, it is a part of the model that I can rotate, fly through, etc. The location is standing at the Sandbanken, viewing away from the sandy beach and to the curving tunnel that leads towards Torget. 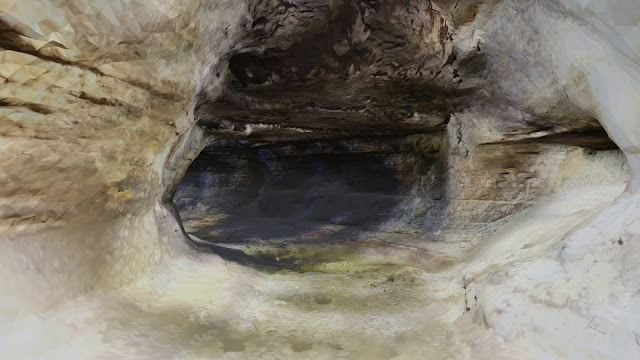 View of the entire modelled area: