One of those rounds 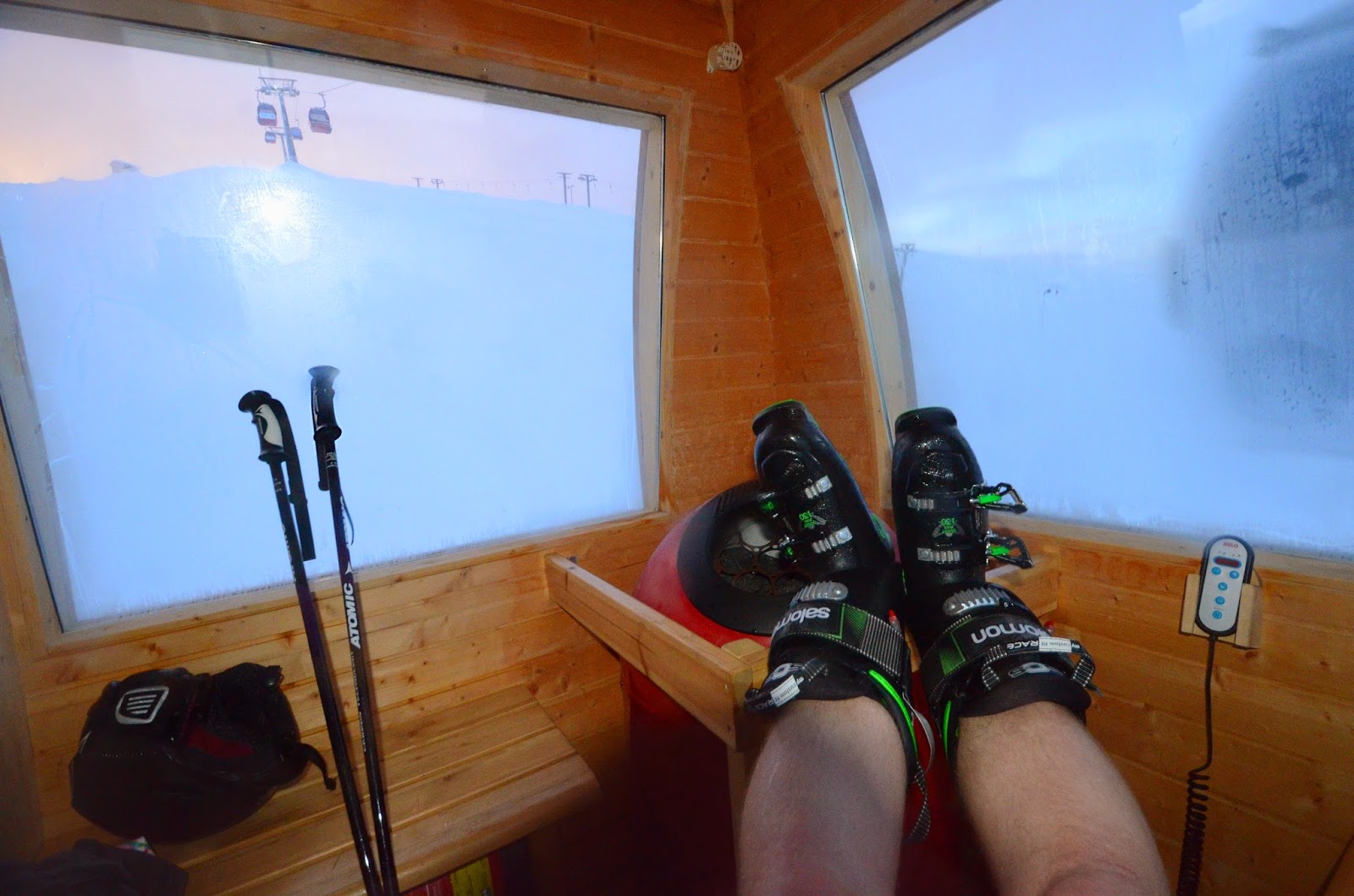 This is how we do ski lifts in Finland. I wanted to give you a taste of one round of the 24-hour ski competition in Ylläs, Finland. As if doing 30+ miles of vertical in one day wouldn't be enough.

This is unique, and not just because of the competition. Only two sauna gondolas exist, and only the one here in Ylläs is on a running ski lift. And even they have not used it for mixing proper sauna sessions with skiing.

Thank you Katri and Mikko and the lifties for making this story possible. 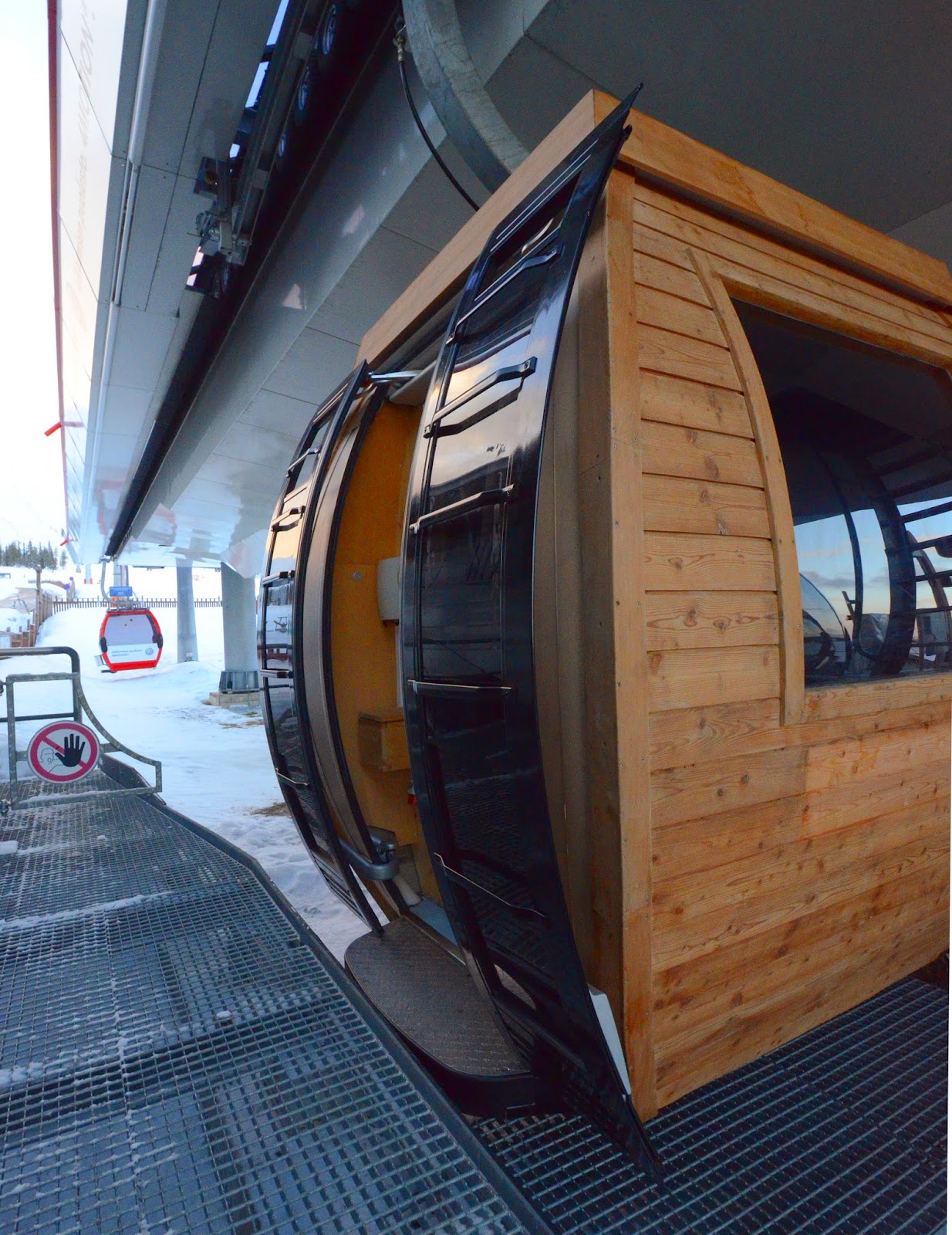 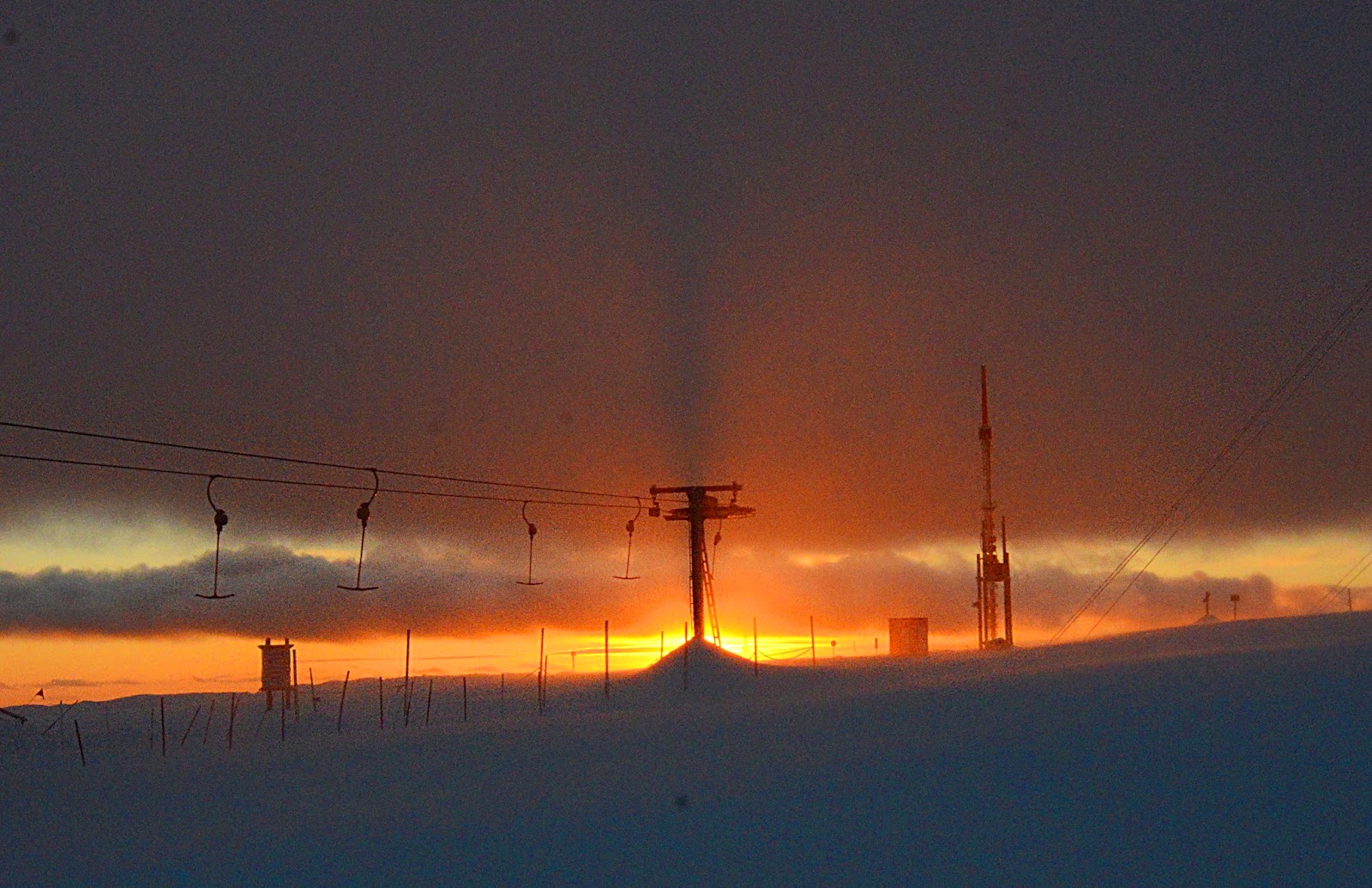 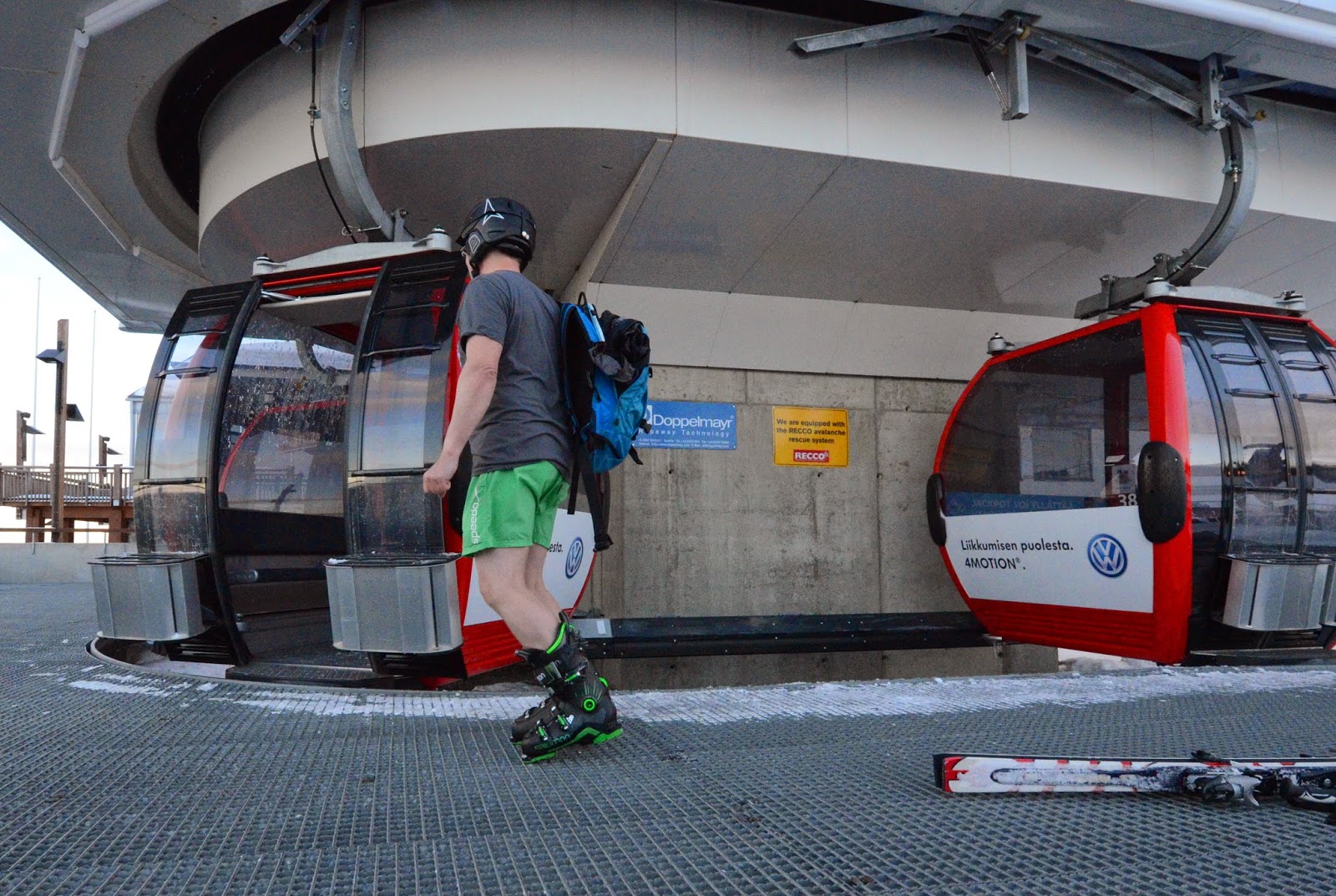 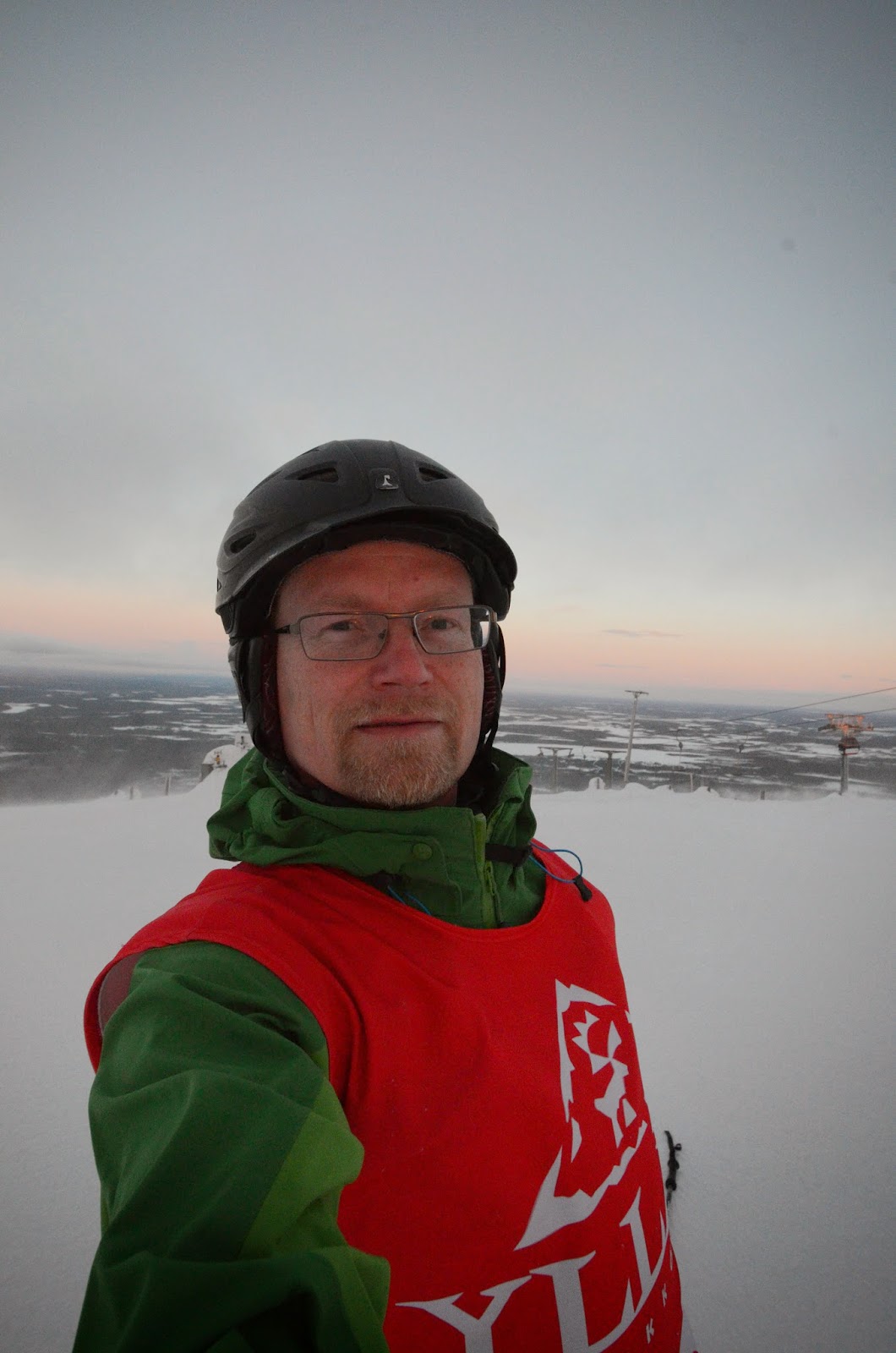 The sun is setting in the evening: 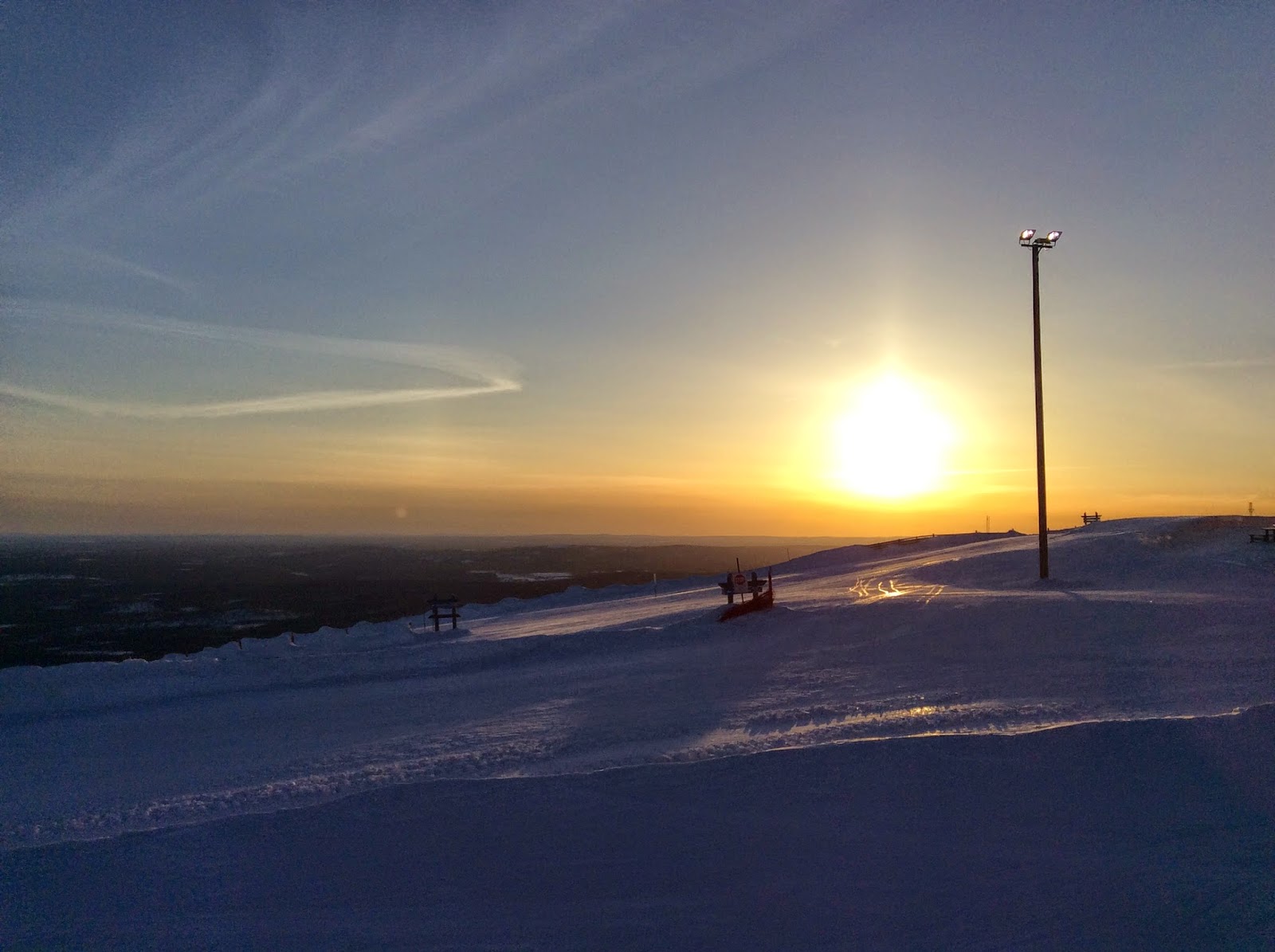 The darkest part of the competition is of course the early hours of the day. It is dark, you do not see many people, if any (depending on how you happen to hit the gondolas with respect to other competitors). The sunrise is a very much awaited event after the night, but this time the sunrise was also very beautiful: 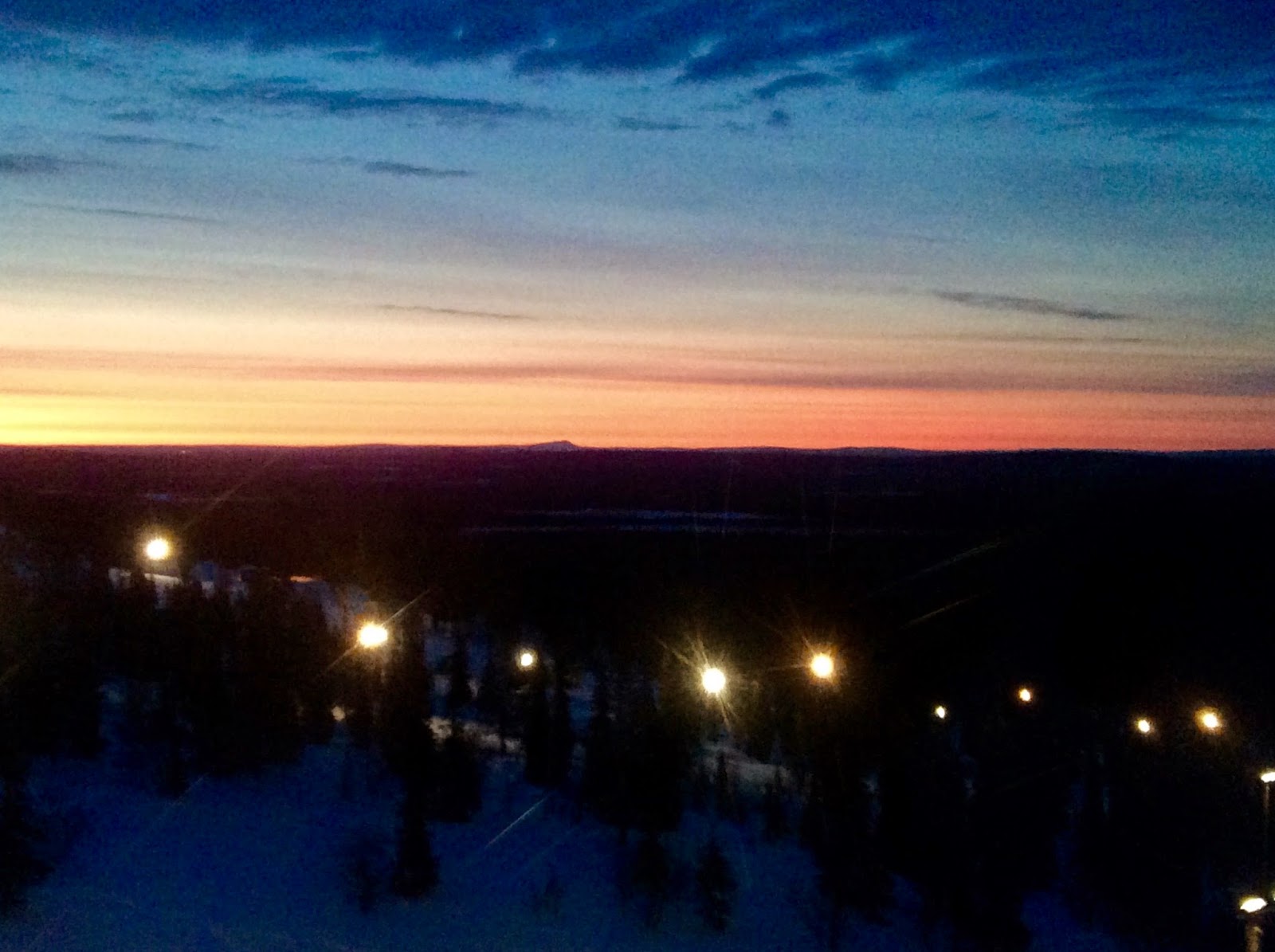 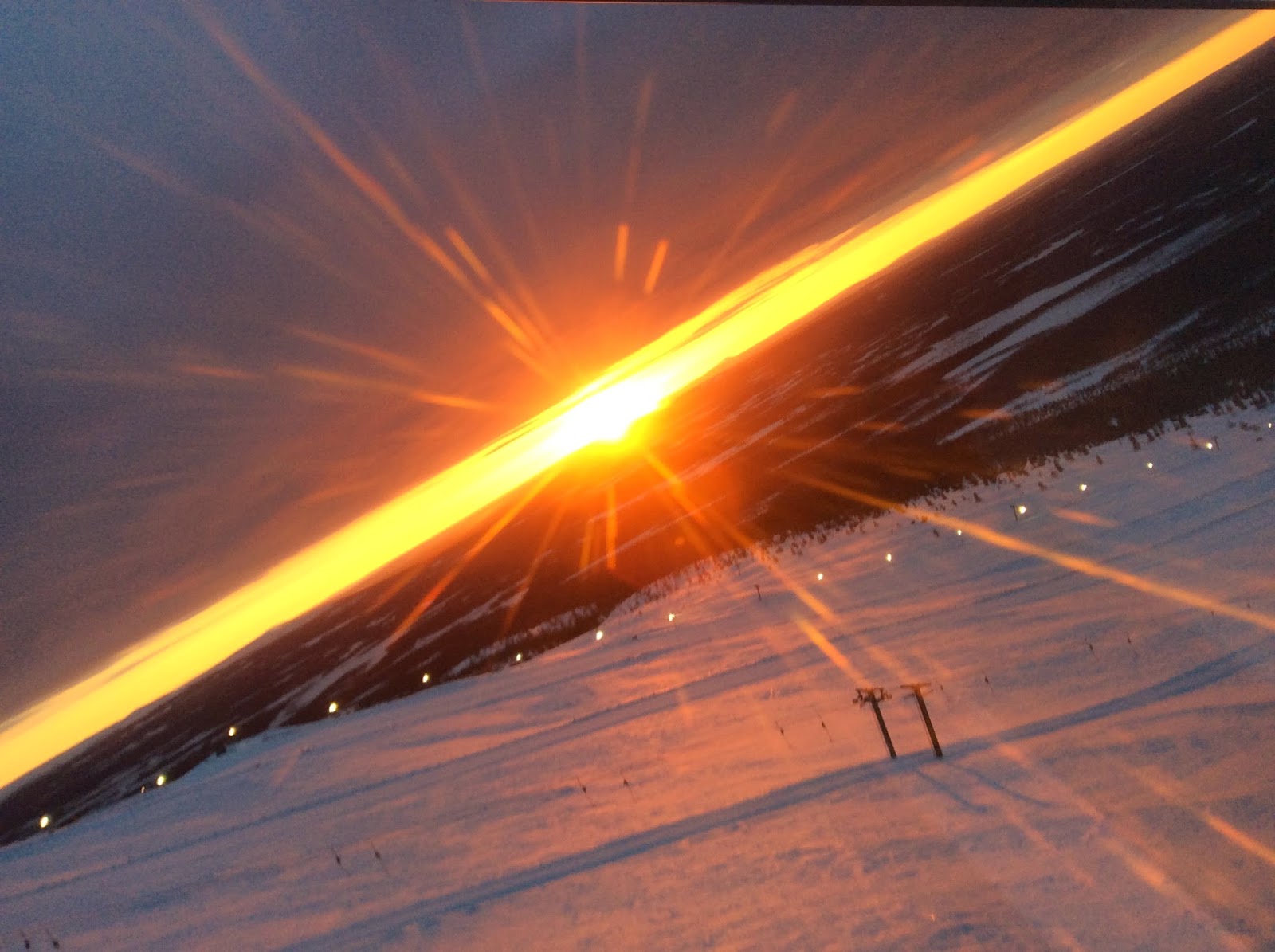 The competition is over, and getting rid of the ski clothes and the boots that I wore for about 25 hours is a relief. But I am hurting everywhere. Feet. Calves. Knees. Thighs. Butt. Stomach muscles. Arms. Hands. Nose (from sun). Neck. Back.

Even with having just woken up from a 12-hour sleep that I started right after the results ceremony, I feel my body was really strained in the 24 hours. But it felt good to do it, and after some days of rest my muscles will feel good and be stronger from the experience.

The competition was mostly smooth running, except for one incident for my fellow competitor Edwin. At some point the organisers decided that they want to slow us down and started putting up a net fence to guide us to the other side of the slope. However, this happened in the middle of the night, in the middle of the slope, in the darkest corner of the otherwise relatively well lit slope, right through the track that we had already been running for hours. I'm sure you can predict what happened.

A few of us saw them - me included - and went around, wondering what they were up to. But Edwin didn't see the barely visible net, just wondered why the two ski instructors were jumping frantically as he was speeding past. Bam, straight to the net. I'm very glad that he wasn't hurt, just a few minor burns in hands. But it must have been a major impact, at that point in the slope we would have been doing maybe 70-80 km/h, and he is a fast skier. Maybe the fastest among us. Fortunately he was able to continue. After getting untangled from the net, he was behind the rest of us two rounds. If it were not for this accident, Edwin for sure would have been past me in the end results, maybe others too.

Anyway, the results. The winning team was Ylläs Kota (121 rounds) and in the individual competition Leo Pasto (122 rounds). Congratulations, amazing results! I came third, with 120 rounds. And we all got wonderful prizes, from Head skis to backpacks and tickets. I got a 2016 season pass for Ylläs, which of course means that I still have to go skiing, even with all this pain in my muscles :-)

But perhaps more important than this that we all skied quite a lot, and in the end safely. But how much, exactly. My main goal in the competition was to break the 50 km barrier, and with my 51,600 meters of vertical I did! Very happy about that. For distance we skied more than 300 kilometres. We also skied quite fast. I did not have GPS on all the time, but I measured some of the runs. Even on the slowest route, Aurinkorinne, I measured 98 km/h on the steep part. And my first run down the Worldcup run was at 114 km/h.

I could also clearly feel the benefits of my new skis. Last year I used my general-purpose skis, and they start to twitch and become unstable at higher speed. The new ones, Atomic GS racing skis worked very well. They were very stable at any speed, and I was able to slide faster on the flat parts than those competitors that used general-purpose skis. However, the racing skis are also heavier, and in the final hours I my hands and feet were getting tired from carrying them, and on making the necessary skating pushes to get to the start of the slopes. More muscle needed, I think.

The full results can be seen below: 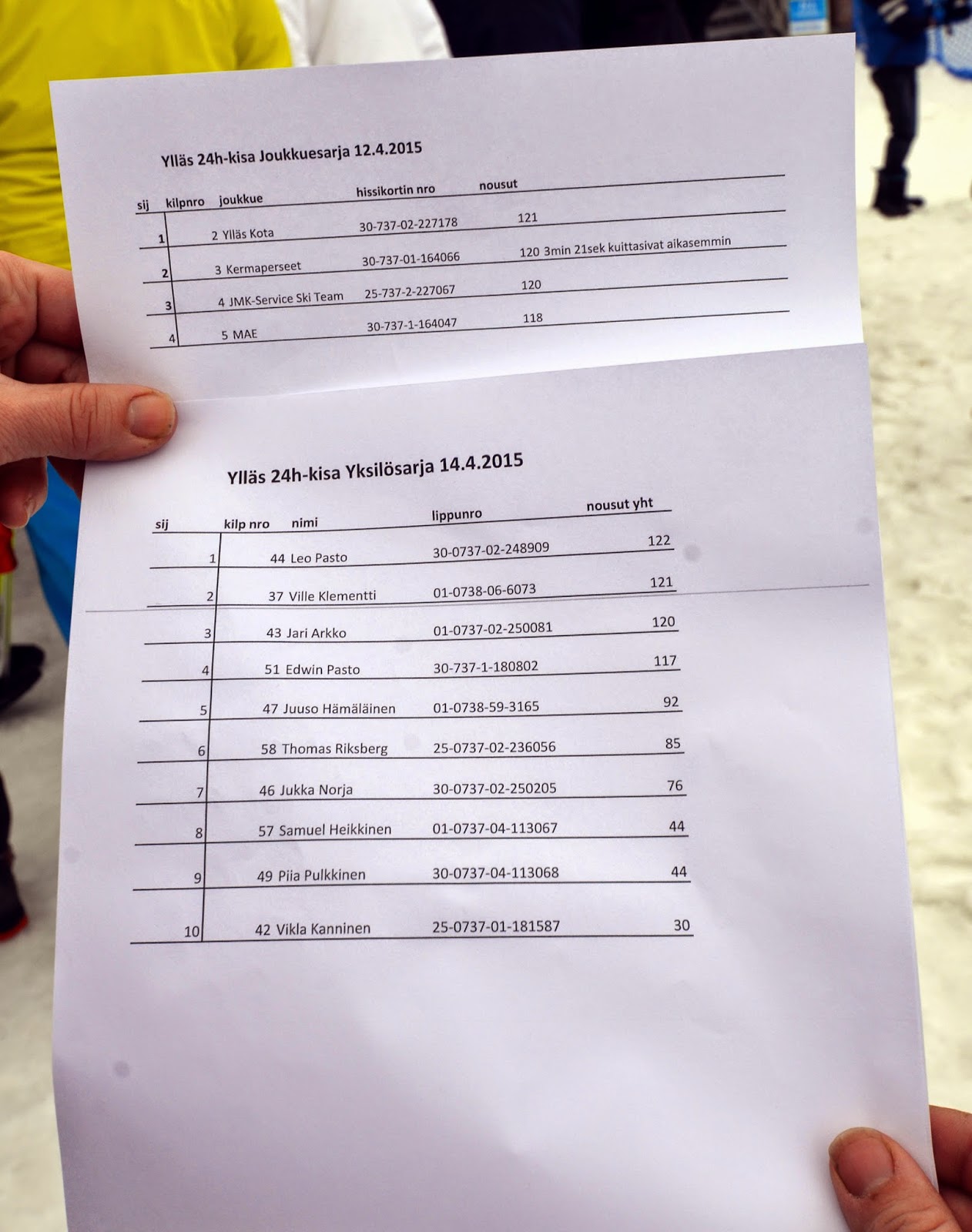 And now some pictures from the ceremonies. Here is Leo Pasto receiving his new Head skis: 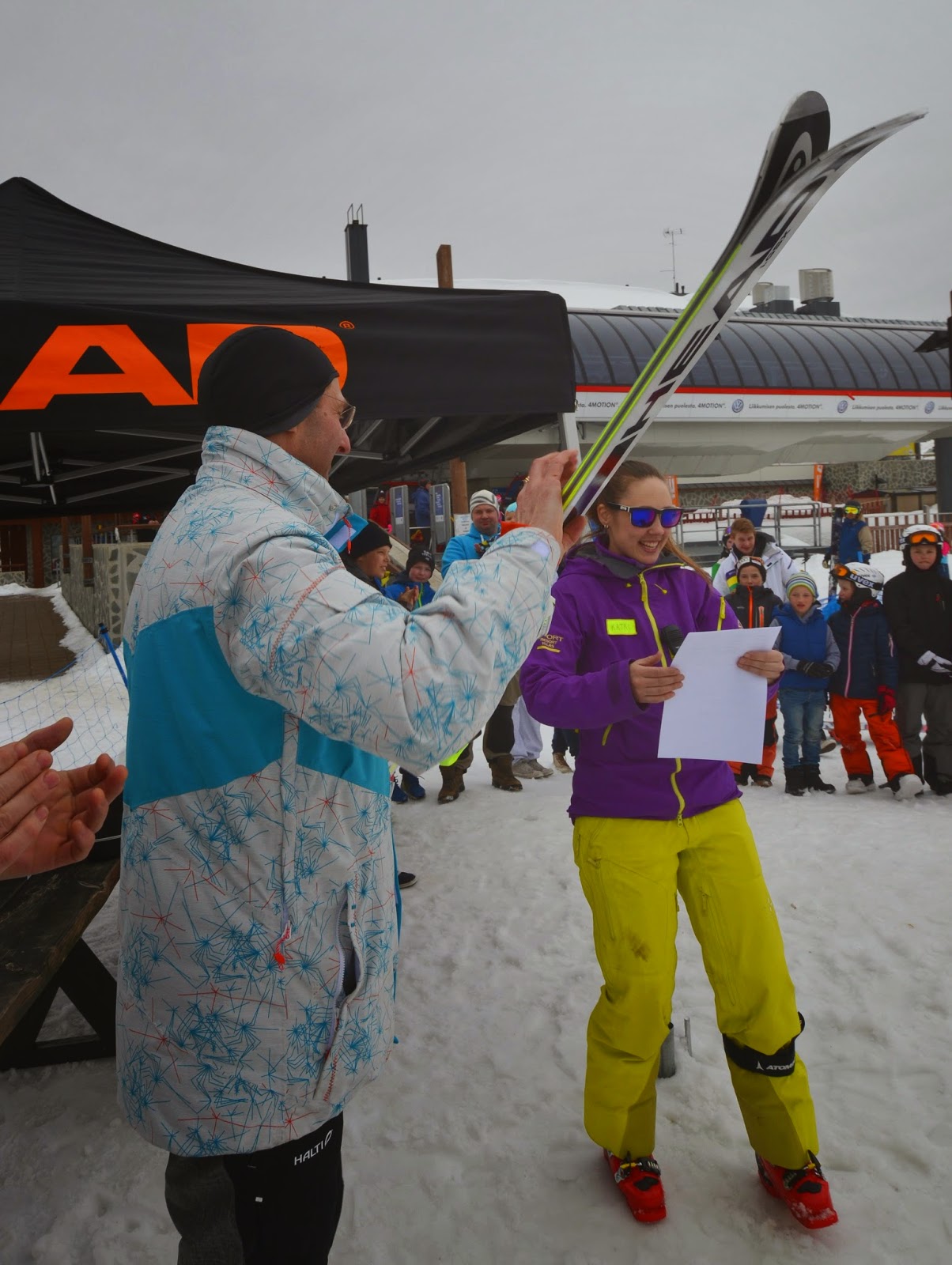 And here are all the winners: 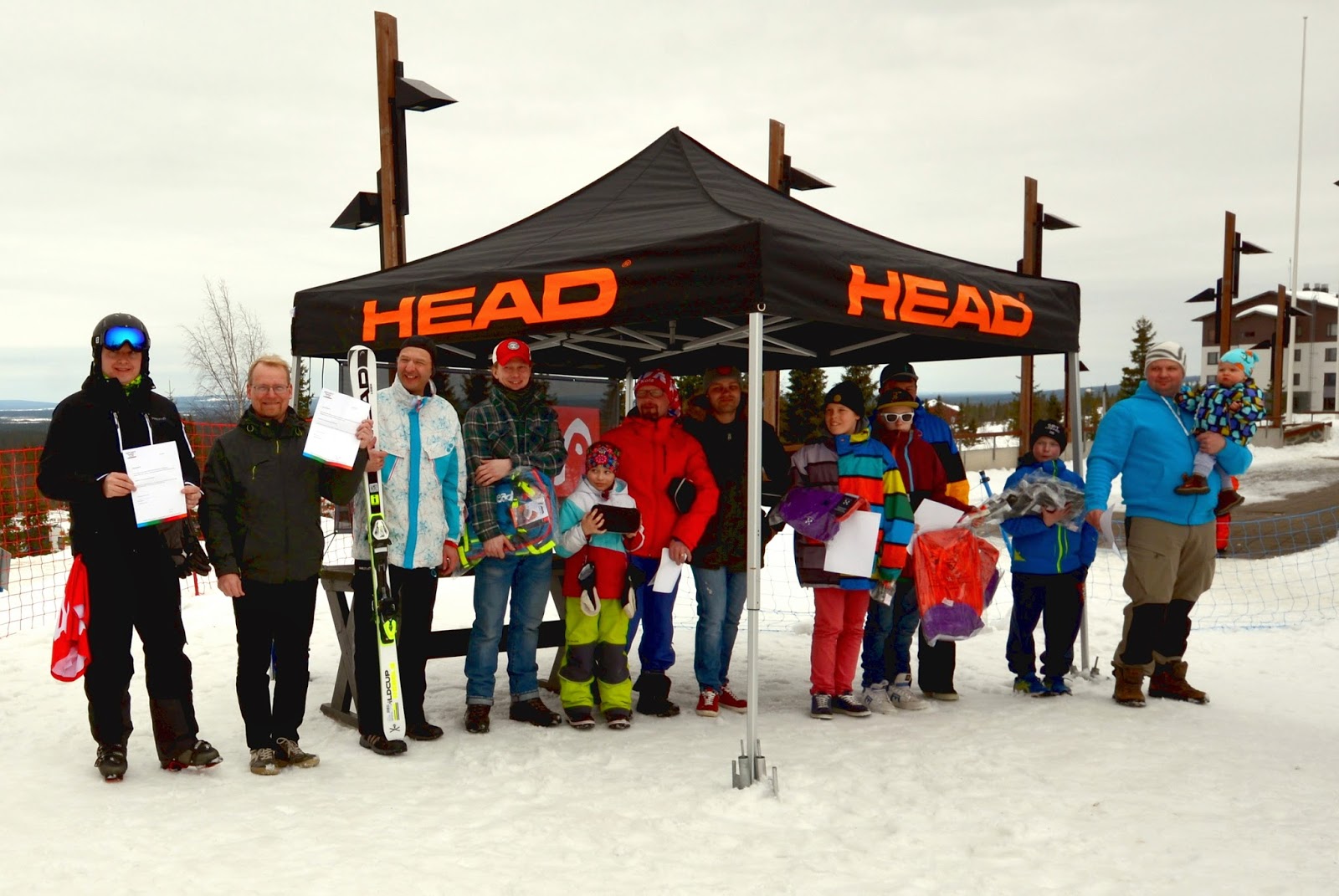 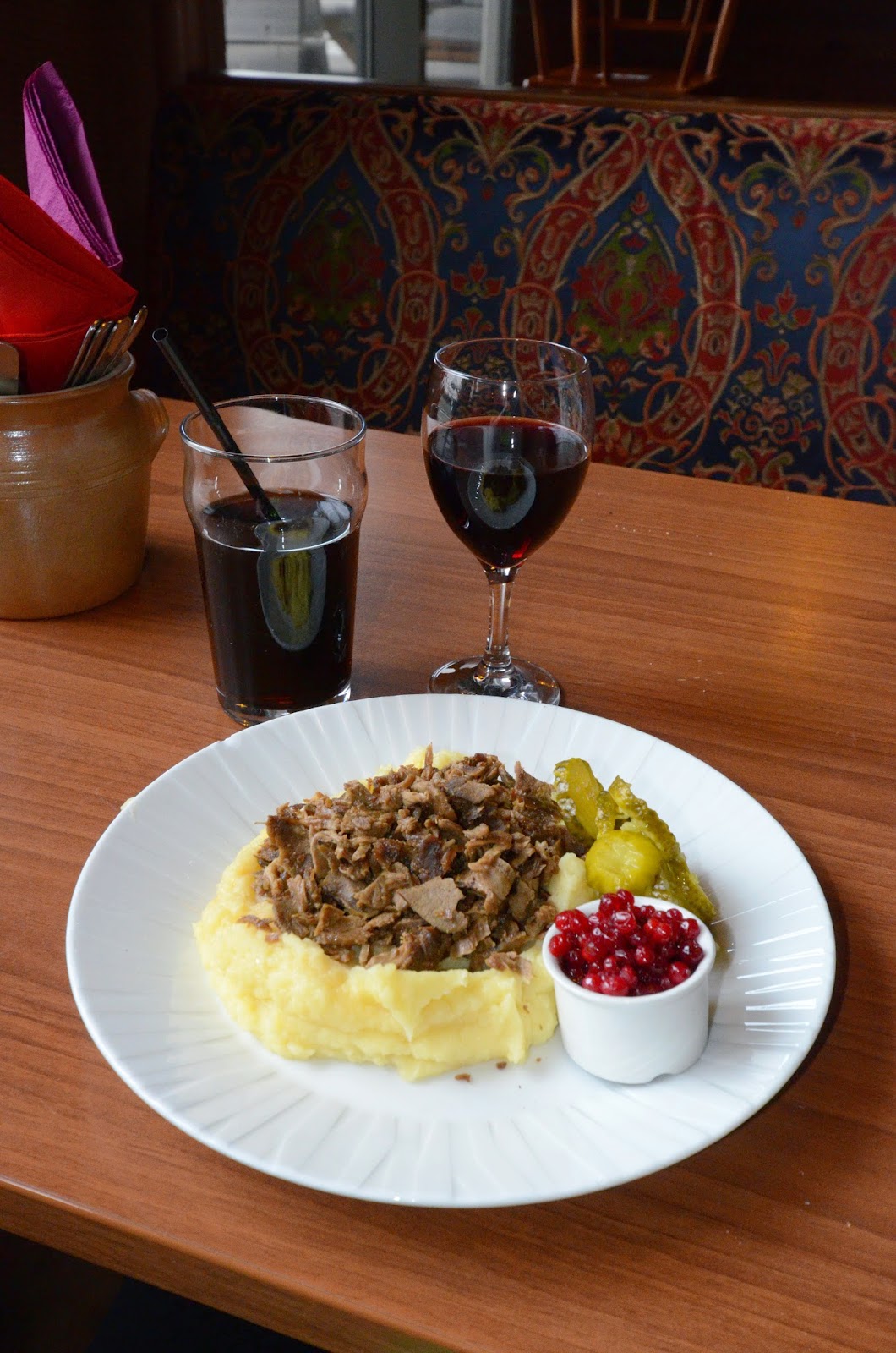 Three weeks later and I'm slowing getting back in shape. After the competition I was in bruises from hitting things while running from the lift and down the stairs, and my airways had become inflamed from heavy breathing in that cold air. I did not have fever or need medicines, but was coughing, was very tired, and clearly not well. The doctor gave me about two weeks for the recovery, and now indeed I am more ore less back in shape. Haven't had a chance to visit a ski slope yet, as I wanted to avoid exerting effort and my local ski hill would have required climbing to ski the remaining snow. Hopefully there is some left when I get back from my current trip.

Also, the video from the sauna got picked up by Teton Gravity Research as a "TGR Pick", and widely shared. Here is the link to my TGR version of the article.