It is usually easy to write these articles. But now I even don't know where to start. Should I talk about the skiing at 17,000 ft? The ice climbing to get there? Or spending a night in a tent at five kilometers? How sick I felt at the altitude? The craziness of climbing at these altitudes just hours after arrival, with no acclimatization at all? Or how my guides had been telling everyone I'm the chico loco, a crazy boy who skis mountains naked? (Based on seeing a blog article where I skied in a swimsuit on my local hill.) Or how the climb went from fun to an almost tragedy for my friend? And how my guide saved the situation by carrying her off the mountain on his back? For ten kilometers... and I had trouble keeping up behind them.

But all was well, in the end. And this entire experience lasted just 48 hours. A weekend to remember, if any...


My goal for the weekend was climbing up Bolivia's 5,320 meter (17,000 ft) Tarija Peak - with my skis. Higher than I've ever been skiing or climbing, by a margin of a kilometer! Still, Tarija was a mere hill on the neighboring 6000+ meter peaks of the Cordillera Real. 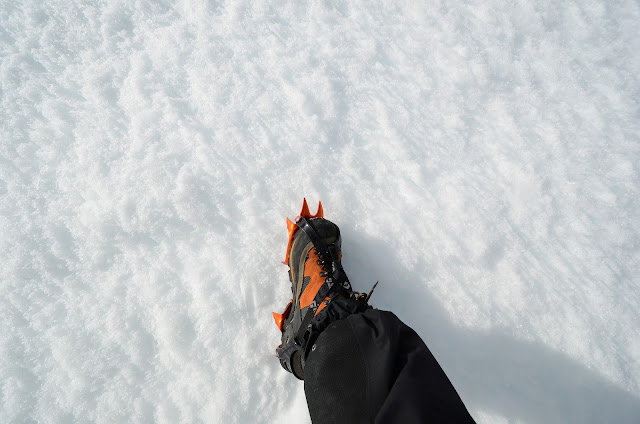 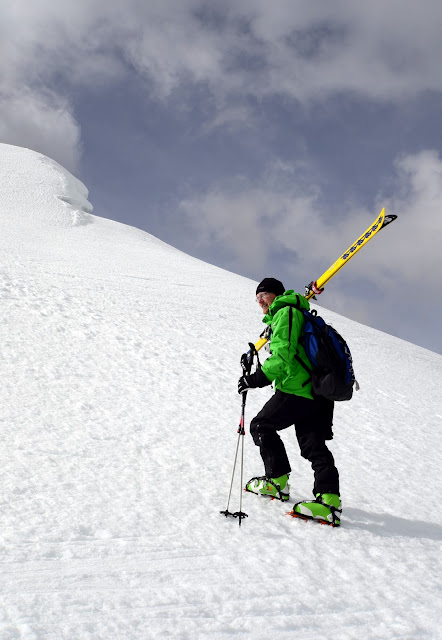 
Flying to Bolivia is surprisingly easy. American Airlines flies there daily from Miami. I took this flight on a Friday evening after my work was done for the week, slept in the plane, and landed in La Paz, Bolivia's biggest city at 6 AM. But while this itinerary sounds simple, the flight was exciting. First of all, El Alto, La Paz's airport is one of the highest airports in the world, sitting at 4061 meters. Arriving passengers sometimes pass out on arrival. All of us are familiar with how our ears pop as aircraft land and the air pressure rises inside. Our ears popped when we approached La Paz, too, but due to pressure dropping, as the pilots allowed the inside pressure to gradually normalize to the outside environment. This happened while we were still in air. The picture below shows pressure altitude being at almost four kilometers inside the aircraft, while we are still in the air. I do hope the pilots were donning their oxygen masks, as having them suddenly lose consciousness during the approach would have been bad.


But we had no problems, and I didn't feel anything special at the airport. The crew from Bolivian Mountain Guides was at the airport to meet me: the guide, driver, secretary, the small kid and the teenager. What an expedition! We took my gear to the hotel in La Paz, situated a bit lower, at altitudes between 3700 and 4100 meters. The hotels in La Paz offer essential amenities such as oxygen. But I felt OK without.

But we continued, and took off for a three hour drive towards the mountains.

In the beginning, the going was easy. I felt good after hiking an hour to the base camp, situated at 4700 meters near the Laguna Chiar Kota lake. The evening was fun as our expedition cook kept bringing us more and more food.


There were a couple of other climbing teams in the same camp, but my guiding company had the biggest setup. They had three guides, a cook, two clients, and four tents in addition to the kitchen tent. We also employed a couple of local teenage girls for running a few mules up to the camp with our gear, including my skis.

The base camp was on a rocky but level ground near the incredibly beautiful lake. Our crew tried fishing from the lake, but failed to catch any fish this time. (In school I had learned that the world's highest lake is Titicaca, but it is a kilometer lower than our base camp lake. I made an Internet search to find out that there are actually lakes and ponds all the way to 6,390 meters! Titicaca is merely the highest lake with commercial ship traffic. Lame.)

Spending the night in a tent at this altitude felt a bit uncomfortable, however, and in the 5AM approach march I was almost ready to turn back. There were no severe signs of altitude sickness, but I was tired and had lost my appetite. But since we were not gaining much altitude, I kept continuing in an effort to at least see the snow and maybe ski a few meters before turning back.

But after reaching the start of the glacier and eating some food, I suddenly felt much better. Crampons were on, and I felt good. Not quite running up the mountain, but almost. Food made the difference? Or moral boost from reaching snow? Hard to tell, but we continued. I reached my new goal of climbing to 5000 meters. But I still felt OK, so we continued. The last two hundred meters were tough, however.

I initially decided to just reach the main ridge, but then the steep snow cover on the face towards Tarija tempted me to climb a bit to ski the steepest initial part. Then I was so close to 5300 meters that it would just make sense to climb a few more meters... and then my guide insisted that the top of Tarija ja just a few more meters higher than us... and then I was at the top. Or the top of the skiable part; I chose not to climb the knife edge a little bit further on the same ridge of mountains that might have been the proper peak of Tarija, as it would have required proper ice climbing, and I felt it would be better ski back to lower altitudes as soon as possible.

Still, climbing this high this fast may not have been the smartest thing to do. I was at the top of the mountain just 30 hours after having arrived in the dizzying heights of La Paz. Not much time for acclimatization.

Four minutes. Fast, on icy and hard snow, and no stopping. The snow was in perfect condition, fun to ski.

Bolivia is best reached through La Paz, and there are plenty of climbing and skiing opportunities nearby. The world's highest ski area, Chacaltaya, sits nearby at 5,430 meters, but has been closed as the glacier melted away. It does get occasional snow, however. Bolivian Climbing Guides and other local agencies can help you in any climbing expeditions. Just be aware that explorations in these mountains are very dangerous both due to the high altitudes and being far away in the wilderness. You need a self-sufficient team to deal with any emergencies. There are no helicopters to rescue anyone, for instance - we tried.

Photo and video credits (c) 2012 by Jari Arkko, with some help from the Bolivian Mountain Guides

Posted by jariarkko at 3:38 PM