Skiing in the Rain

Midsummer weekend, June 2011. You know that old story about pots of gold at the end of a rainbow? Well, I only found some wet sheep.

I'm here to fix a twenty year old mistake. On my previous visit to Norway, I did not ski here. Now I will. Even if it looks a bit boneheaded move at the moment. The idea was good, my family was nice enough to let me do this detour while they took a rest day in the cabin in Stryn. 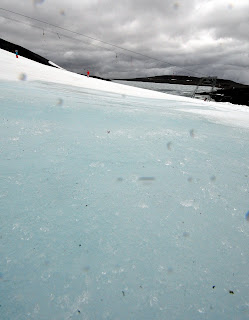 But its raining cats and dogs. Visibility is poor. There is not a single tourist on the mountain, just a handful of ski teams practicing on race tracks. And Galdhøpiggen is far from Stryn, 150 kilometers. On the roads of Norway, that's a long way. Just to give you an idea: 25 kilometers out of that is in tunnels. Dizzying, old, water-dripping dark tunnels. Lonely tunnels. I could drive ten kilometers and not see another car. 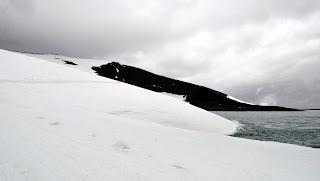 But enough about transport. What's the skiing like at Galdhøpiggen? This is Norway's highest ski area, staying open longer than anything else, including Stryn. They normally open mid-May and run until August. Its perhaps not as relaxed and adventurous as Stryn, and has a bit less vertical as well. But it has wide open runs that are long and steep enough to attract ski teams from around Europe. You can keep making turns all the way down for some sustained fun. And for training your leg muscles.

Snow is mostly slush, or at least was when I arrived around 11 AM and it had already been raining heavily for a while. There are occasional spots of blue ice and water, as well. It takes a bit over two minutes to ski down, but the slow T-bar lifts make each roundtrip far longer.

You could also say that the ski runs are a bit boring, there's no variation, there's no true challenge like there was in Stryn. The views are great in both places, of course. Here you keep approaching the Juvvatn lake at the end of the glacier.

But I was particularly fond of the run on the skier's left. This run goes direct towards the drop-off and the lake, and seems steeper than the other side. Just remember to stop in time! There are nets near the lift, but if you venture further left you are on your own.

Off-piste is not directly next to the piste like it was in Stryn. Had there been better visibility and weather, I would have climbed the mountain towards the back on the skier's left, and then skied down towards the lake.

The climb seems easy enough, its not steep and you can do it where some rocks are exposed, in relative safety from the dangers of the glacier. However, I do not know about the crevasse situation on the snow path back towards the lake and the lift. Check with someone who knows if you plan to attempt this.

It is also possible to hike to Galdhøpiggen, highest mountain in Norway at 2469 meters. The trek takes 6-7 hours and is about 15 kilometers. I did not have time for this, and I don't know if its possible to ski down. 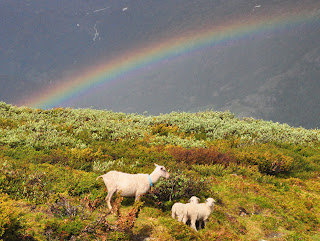 The essential parameters for Galdhøpiggen are as follows. The bottom of the ski area sits at 1850 meters, and the lift takes you all the way up to 2200 meters, giving you a vertical of 350 meters. The length of the main ski runs is 1400 meters.  One day lift pass costs 355 NOK or about 46 €. The ski area is located here, 34 kilometers south of Lom. Any vehicle is usually sufficient for the access, 4wd is not required and the road is easy to drive on. You have to pay toll at the gate, however. There is accommodation at Juvashytta, a large hotel complex half a kilometer from the ski area. Soup costs 89 NOK, or about 11 € here.